College Football Championship Game to be played in Glendale in 2016, Tampa in 2017 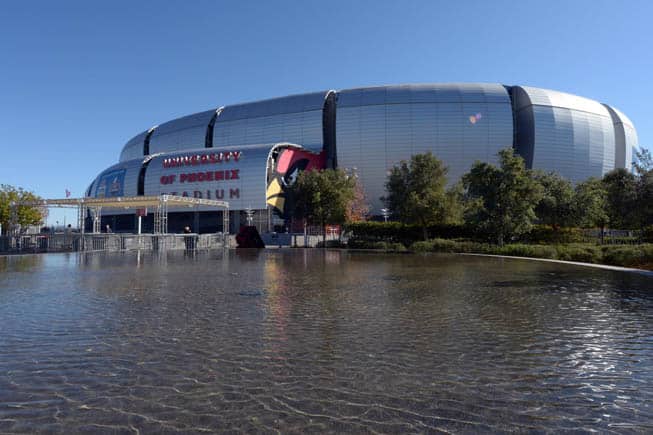 The College Football Championship Game will be played in Glendale in 2016 and Tampa in 2017, playoff organizers officially announced today.

University of Phoenix Stadium in Glendale, AZ will host the College Football Championship Game on Monday, January 11, 2016. The stadium has a capacity of 63,400 but is expandable to 72,200.

The 2017 College Football Championship Game will be played at Raymond James Stadium in Tampa on Monday, January 9, 2017. Raymond James has a seating capacity of 65,890.

Earlier this year, it was announced that the first ever College Football Championship Game would be played at AT&T Stadium in Arlington, Texas. The game will be played on January 12, 2015 following the two semifinal games.

Here is a look at the venues for the first three years of the playoff:

It looks like the Championship Games will cycle through the different regions of the country; Arlington covers the Midwest, Glendale covers the West, and Tampa covers the East. 2017-18 could be Houston or San Antonio, 2018-19 could be San Francisco/Seattle, and 2019-20 could be Miami (if they have a new stadium) or Charlotte.

RobertCalcagno – I think you forgot the Upper Midwest in your scenario where Detroit and soon to be a new stadium in Minneapolis would be excellent locations for College Football Championships. College football is played in more locations than just the West Coast, Southwest and Southeast.

True! One location that I would have to imagine will come up would be Indianapolis since it’s the home of the NCAA and Lucas Oil Stadium has been a favorite for the organization. The only thing against is that, for some reason, it doesn’t host a bowl game of any sort so it has no prior history with a bowl game before.

Atlanta will contend in 2017 with a new stadium too.

any place in the north not in a dome is a sin. it means so much to everyone to see them compete at their best i.e. max playing conditions. the geography situation is meaningless. outdoors is sad for all. the superbowl in new jersey will prove that this season. leave out the politics and defray to good reasoning.