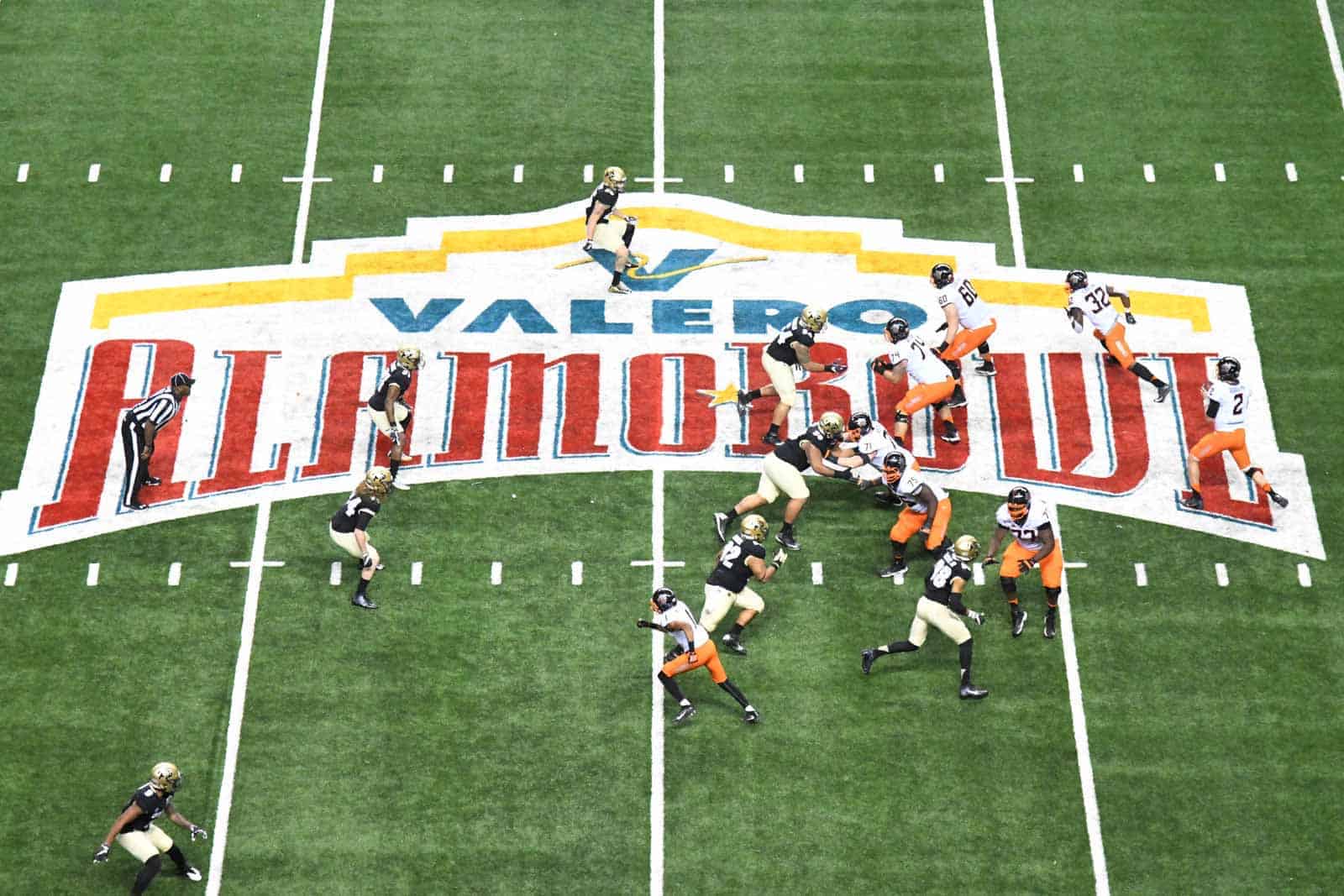 There are a whopping 11 bowl games on the bowl schedule from Tuesday, Dec. 26 to Thursday, Dec. 28.

It breaks down to three games on Tuesday and then four apiece on Wednesday and Thursday. Each day follows a similar blueprint which makes viewing easy – kick off at 1:30pm EST on ESPN, second game at 5:15pm EST on ESPN and then the closer at 9pm EST on, you guessed it, ESPN.

The only games not on ESPN are the Foster Farms Bowl (Arizona vs. Purdue) on Wednesday at 8:30pm EST on FOX and the Holiday Bowl (No. 18 Washington State vs. No. 16 Michigan State) on Thursday at 9pm EST on FS1.

The must-see TV comes on Thursday evening when the first three ranked vs. ranked matchups of bowl season come consecutively. Not only does each feature two of the best teams in the land squaring off, each offers a stellar statistical matchup.

Hold on to your hats folks. This is not the time to turn off your television set.

Utah and West Virginia have only met once previously, 53-years ago in the 1964 Liberty Bowl. The Utes won 32-6 in Atlantic City, N.J. – the only time the Liberty was played there. It was also the first time a major bowl game was played indoors, in this case in the city’s Convention Center. The Liberty was played in Philadelphia from 1969-63 and has been in Memphis since 1965.

The intriguing matchup in this one is West Virginia’s No. 12 passing attack taking on Utah’s No. 54 ranked pass D. Though the Utes don’t play in the pass-happy Big 12, they’ve earned their stripes against the best aerial attacks in the Pac-12 – holding UCLA (No. 5 in the FBS in passing yards) to a mere 115 yards in November. Keep in mind that WVU’s starting quarterback – Will Grier – will not play due to a hand injury. Sophomore Chris Chugunov (#11) will make his second start under center in relief. On the other side of the ball, while Utah’s offense comes way short of being prolific, the Mountaineers rank No. 111 nationally in total defense.

West Virginia: junior wide receiver David Sills V (#13) (No. 1 in the FBS in receiving TDs), senior linebacker Al-Rasheed Benton (#3) (No. 8 in the FBS in solo tackles).

Northern Illinois is 4-7 in bowl play. It also last went bowling in 2015, a lopsided 55-7 loss to Boise State in the Poinsettia Bowl. It was the fourth-consecutive bowl loss for the Huskies. Its most recent win dates to the 2011 GoDaddy.com Bowl, a 38-20 win over Arkansas State. NIU has never beaten a Power school in a bowl game.

Duke and Northern Illinois have never met previously. The Blue Devils are 2-0 all-time vs. the current membership of the MAC – scoring two wins over Ohio in Durham in 1985 and 1986. NIU is 1-10 against the ACC, the only victory a 42-41 upset of Wake Forest in DeKalb in 2002.

Duke: sophomore linebacker Joe Giles-Harris (#44) (No. 19 in the FBS in total tackles), sophomore cornerback Mark Gilbert (#28) (tied for the second-most interceptions and the third-most passes broken-up in the FBS).

Northern Illinois: sophomore defensive end Sutton Smith (#15) (No. 1 in the FBS in both sacks and tackles for a loss).

Both teams will potentially have their biggest weakness exposed in this one. K-State’s pass D is No. 129 nationally. Not only does that make them the second-to-worst unit in the FBS (only UConn has been more generous through the air), it earns them a dead-last finish in the beleaguered Big 12. Usher in UCLA’s No. 5 ranked pass offense and you get the picture. On the flip side, the Bruins’ are No. 129 vs. the run. Only San Jose State is worse nationally and no team has given up more ground yards in the Pac-12. The good news is, K-State’s rushing attack is only ranked No. 42 in the FBS. While it’s not a super power, it may look like one in the Cactus Bowl.

UCLA: junior quarterback Josh Rosen (#3) (No. 3 in the FBS in passing yards per game), junior wide receiver Jordan Lasley (#2) (No. 11 in the FBS in total receiving yards, despite playing in only eight games).

Southern Miss is 11-11 in bowl play. It beat UL-Lafayette 28-21 in last season’s New Orleans Bowl. Its most recent bowl loss came the year before, in 2015, when it fell 44-31 to Washington in the Heart of Dallas Bowl. The Golden Eagles haven’t beaten a current Power school in a bowl game since the 2000 Mobile Alabama Bowl, a 28-21 win over TCU.

Southern Miss and Florida State have met 22 times previously, but not since 1996. The Seminoles lead 13-8-1. This is the first-ever postseason meeting.

Though Florida State will have a clear advantage in athleticism and depth, Southern Miss’s defense ranks in the top 30 nationally against both the run and the pass. It sets up for an intriguing test vs. a Seminole offense that hasn’t managed to find a rhythm all season (No. 84 in rushing and No. 92 in passing). Can the Golden Eagles keep FSU under its scoring average of 26.7 points per game?

Boston College is 14-11 in bowl play. It beat Maryland 36-30 in last year’s Quick Lane Bowl – also its first bowl victory in six tries. Its most recent loss came in the 2015 Pinstripe Bowl, a 31-30 defeat in overtime to Penn State.

Iowa and Boston College have never met previously. The Hawkeyes are 8-11 all-time against current ACC members while the Eagles are 38-41-2 vs. the Big Ten (the bulk coming against Rutgers and Penn State).

The strength vs. strength matchup in this one is Iowa’s No. 38 ranked rush defense taking on Boston College’s No. 24 ranked ground attack.  The Hawkeyes’ defense has only allowed more than 200 rushing yards on three occasions this season while the Eagles’ ground game averaged 290 in their last six outings. If it’s close, BC’s kicker – junior Colton Lichtenberg (#99) – has the second-to-worst field goal percentage (58.8) in the FBS.

Iowa: junior defensive back Josh Jackson (#15) (tied for the most interceptions in the FBS), senior middle linebacker Josey Jewell (#43) (No. 10 in the FBS in total tackles).

Boston College: junior defensive back Lukas Denis (#21) (tied for the most interceptions in the FBS), freshman running back AJ Dillon (#2) (No. 15 in the FBS in rushing yards per game),

Purdue is 9-8 in bowl play. This is the Boilermakers’ first bowl appearance since 2012, when they got thumped 58-14 by Oklahoma State in the Heart of Dallas Bowl. Their most recent win came in the 2011 Little Caesars Bowl, a 37-32 win over Michigan State. They haven’t beaten a Power school in bowl action since the 2002 Sun Bowl, a 34-24 win over Washington.

Arizona and Purdue have only met twice previously, a home-and-home series in 2003 and 2005. The Boilermakers won on both occasions.

In one of the better strength vs. strength matchups this bowl season, tune in to see Arizona’s lethal No. 3 nationally ranked rushing attack take on Purdue’s defense, ranked No. 30 vs. the run. The Wildcats have averaged 324.42 ground yards per game while the Boilermakers have held opponents to 133.33. On the flip side, Purdue’s No. 55 ranked passing attack might look like Oklahoma State vs. Arizona’s No. 122 ranked pass D (the worst unit in the Pac-12).

Arizona: sophomore quarterback Khalil Tate (#14) (No. 6 in the FBS in rushing yards per game among all backs and No. 1 among QBs).

The Longhorns and Tigers have been equally unsuccessful at stopping the pass this season. Texas ranks No. 108 in the FBS in pass defense while Mizzou is No. 109. This makes an intriguing matchup vs. two offenses that are better at throwing the ball than running with it. On that mark, the Tigers’ have the advantage with a No. 14 national rank in passing offense vs. the Longhorns’ No. 36.

Texas: junior linebacker (#46) Malik Jefferson (No. 5 in the FBS in solo tackles).

Virginia and Navy have met 39 times previously, but not since 1994. The Midshipmen lead 28-11 all-time, but the Cavaliers have won five straight. This is the first-ever postseason meeting.

This matchup sets up poorly for Virginia, a defense that has exceled vs. the pass this season (No. 15 nationally), but not against the run (No. 81). Always prolific on the ground, Navy is No. 2 in rushing yards per game. That said, the Cavaliers held Georgia Tech – the ACC’s option-centric team – to 220 yards rushing in a 40-36 win in early November. Compare that to the Yellow Jackets season average of 307.36 (No. 5 in the FBS).

Virginia: inside senior linebacker Micah Kiser (#53) (tied for No. 4 in the FBS in total tackles).

Navy: junior quarterback Zach Abey (#9) (No. 12 in the FBS in rushing yards per game among all backs and No. 3 among QBs).

Virginia Tech and Oklahoma State have only met twice previously, a home-and-home series in 1971-72. The home team won on each occasion.

Virginia Tech: junior linebacker Tremaine Edmunds (#49) (leads the team in tackles, tackles for a loss and sacks), senior cornerback Greg Stroman (#3) (tied for the third-most interceptions in the ACC).

Washington State is 7-6 in bowl play. This is the Cougars’ second consecutive Holiday Bowl appearance, falling 17-12 to Minnesota in last season’s game. Their most recent bowl win came the year before in the 2015 Sun Bowl, a 20-14 victory over Miami Fla.

Washington State and Michigan State last met 40-years ago, in 1977. In all, they’ve played seven times, all in the regular season, dating back to 1942. The Spartans lead 5-2.

This is what it would look like if the History Channel played the Sci-Fi Channel in a football game. Tune in to see Michigan State’s No. 9 ranked defense take on Washington State’s No. 2 ranked passing attack. It’s old school vs. new school, Mark Dantonio vs. Mike Leach and everyone’s a winner. Far from being one-dimensional, keep in mind that the Cougars also sport a top-ranked D, coming in at a lofty No. 15 nationally in yards per game.

Washington State: senior quarterback Luke Falk (#4) (tied for No. 10 in the FBS in TD passes), junior defensive lineman Hercules Mata’afa (#50) (No. 5 in the FBS in tackles for a loss and No. 9 in sacks).

Michigan State: sophomore safety David Dowell (#6) (tied for the third-most interceptions in the FBS), sophomore defensive end Kenny Willekes (#48) (tied for No. 4 in the Big Ten in tackles for a loss).

Stanford and TCU have only met twice previously – a home-and-home series in 2007-08. The Horned Frogs won both games.

Yet another stellar matchup on Thursday, can TCU’s No. 4 nationally ranked rush defense shut down Stanford’s Bryce Love – the No. 2 back in all of college football? Love has posted 100-plus rushing yards in 10 of his 11 outings this season (including hanging up 263 on UCLA and 301 on Arizona State in back-to-back games), while the Horned Frogs have held opponents to fewer than 100 six times (including limiting K-State to 70, Kansas to -25, Iowa State to 53 and Texas to nine in four consecutive games).

Stanford: junior running back Bryce Love (#20) (No. 2 in the FBS in both rushing yards per game and total yards), junior strong safety Justin Reid (#8) (tied for the third-most interceptions in the FBS), senior defensive tackle Harrison Phillips (#66) (No. 2 in the Pac-12 in tackles for a loss).