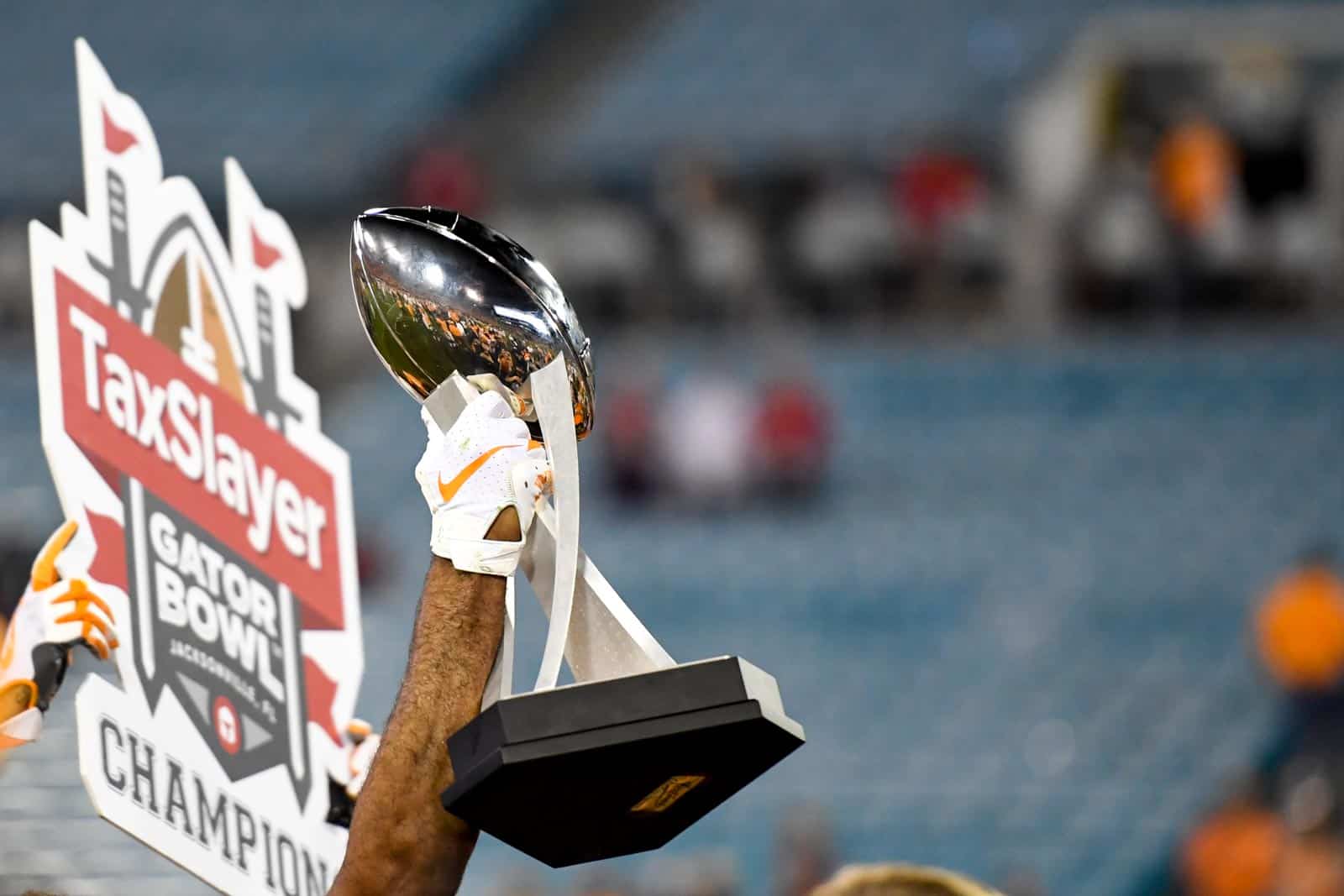 After a Friday night stuffed with semifinals, be prepared to wake up, have your coffee and get back to work. This isn’t a holiday, it’s the final full day of bowl season, and, it’s the last Saturday – until September – that you’ll be able to tune into more than one FBS college football game.

What’s also worth celebrating is the quality of games on offer. Of the four contests, two are ranked vs. ranked matchups, three are first-ever meetings and 100% – according to Vegas – will be decided by nine points or fewer.

The action kicks off at Noon EST on ESPN when (23) NC State clashes with Kentucky in the Gator Bowl. Thirty minutes later – at 12:30pm EST – Ole Miss takes on (11) Indiana – looking for its first bowl win in 29 years – in the Outback Bowl on ABC.

To all who persevered to the end – congratulations and thanks for reading!

After skidding to a 4-8 mark in 2019, NC State has done a great job of quietly righting the ship with an 8-3 finish this year. Impressively, all three of the losses came vs. ranked opponents, two of which remain in the Top 25. The common thread linking the defeats was an inability to stop the run. Where the Wolfpack, on average, allowed 163 rushing yards per game this year they gave up 314 at Virginia Tech, 326 at (13) North Carolina and 189 vs. (18) Miami Fla. Kentucky’s offense has struggled epically this season, ranked No. 107 nationally in scoring and No. 121 in passing yards per game. The one bright spot, ironically, has been running the ball. The Wildcats are ranked No. 46 in the FBS in rushing yards per game, averaging 187. They hung up a season-high 408 rushing yards and six TDs on Ole Miss in a 42-41 loss in October.

Kentucky will be without sophomore DB Kelvin Joseph (tied for the third-most interceptions in the FBS), who opted out of the rest of the season on Nov. 30 to prepare for the NFL draft.

Indiana is 3-9 in bowl play. It got edged 23-22 by Tennessee in last season’s Gator Bowl, also its fifth-consecutive bowl loss. The most recent win came in the 1991 Copper Bowl, a 24-0 shutout vs. Baylor.

This is the first ever football meeting between Indiana and Ole Miss.

Ole Miss’ statistical resume reads like a graph of a junior high school girl’s emotions. At the apex of happiness is an offense ranked No. 13 nationally in scoring, No. 19 in rushing yards per game and No. 6 in passing. It is a balanced, well-oiled machine. In the depths of despair is a Rebel defense ranked No. 121 in scoring, No. 104 vs. the run and No. 127 (dead last in the FBS) vs. the pass. It is generous beyond measure. While Indiana is ranked an impressive No. 18 nationally in scoring D it hasn’t seen anything like Ole Miss this season. The only offense the Hoosiers have faced in 2020 ranked better than No. 55 nationally in scoring is Ohio State (No. 7, averaging 42.5 points per game). The Hoosiers gave up a season-high 42 points and 607 yards to the Bucks in what just so happened to be their only loss this season. On the plus side, even minus starting QB Michael Penix, Jr., Indiana’s offense ought to look like Clemson vs. the Rebels’ D. Prepare to be entertained!

Ole Miss will be without junior WR Elijah Moore (No. 1 in the FBS in receiving yards per game) who opted out of the remainder of the season on Dec. 17 to prepare for the NFL draft.

Indiana: senior WR Ty Fryfogle (#3) (No. 24 in the FBS in receiving yards per game), junior DBs Jamar Johnson (#22) and Jaylin Williams (#23) – with four interceptions apiece they’re both tied for the third-most in the FBS

Ole Miss: sophomore QB Matt Corral (#2) (No. 5 in the FBS in passing yards per game)

This is the first ever football meeting between Oregon and Iowa State.

Iowa State junior QB Brock Purdy (#15) has only thrown an interception in five of his 11 appearances in 2020. He threw one in the 31-14 opening loss vs. (19) Louisiana, one in the 24-21 loss at Oklahoma State, one in a 52-22 win at Kansas, three in a near miss (38-31) vs. Baylor and then three in the Big 12 title loss against Oklahoma. While turnovers can’t be predicted – and it’s an over-simplification to say “don’t make any mistakes and you’ll win” – there is a direct link between interceptions and the final score for Iowa State. As for Oregon, did you know that the Ducks’ D scored five total interceptions this season – two (including one pick six) in the three-point win (38-35) vs. UCLA and three in the 31-24 victory over USC in the Pac-12 title game. Is it any coincidence that these were also the two narrowest victories of the season?

North Carolina is 15-19 in bowl play. It destroyed Temple 55-13 in last year’s Military Bowl. The last time the Tar Heels beat a Power 5 opponent in bowl action was in the 2010 Music City Bowl, a 30-27 victory over Tennessee.

This is the first ever football meeting between the Aggies and Tar Heels.

Tune in to this one to see one of the best strength vs. strength matchups of bowl season – North Carolina’s No. 9 nationally ranked rushing offense (which will be without some of its stars as detailed below) vs. a Texas A&M D ranked No. 4 nationally vs. the run. It’s the same Tar Heel attack that hung up 399 rushing yards and five scores on Virginia Tech, 326 and five TDs on (23) NC State, 338 and five scores on Duke and – wait for it – a season high 554 yards and six rushing TDs on (18) Miami Fla. And – it’s the same Aggie defense that limited (7) Florida to 90 rushing yards, Mississippi State to -2, South Carolina to 50, LSU to 36 and Tennessee to 24. Can you say W O W. As a side note, UNC head coach Mack Brown and Texas A&M have lots of history. Brown was 10-4 vs. the Aggies during his 16-year run as the head coach of A&M’s most-hated rival – Texas. Oh the intrigue!

North Carolina: sophomore QB Sam Howell (#7) (No. 7 in the FBS in passer rating)