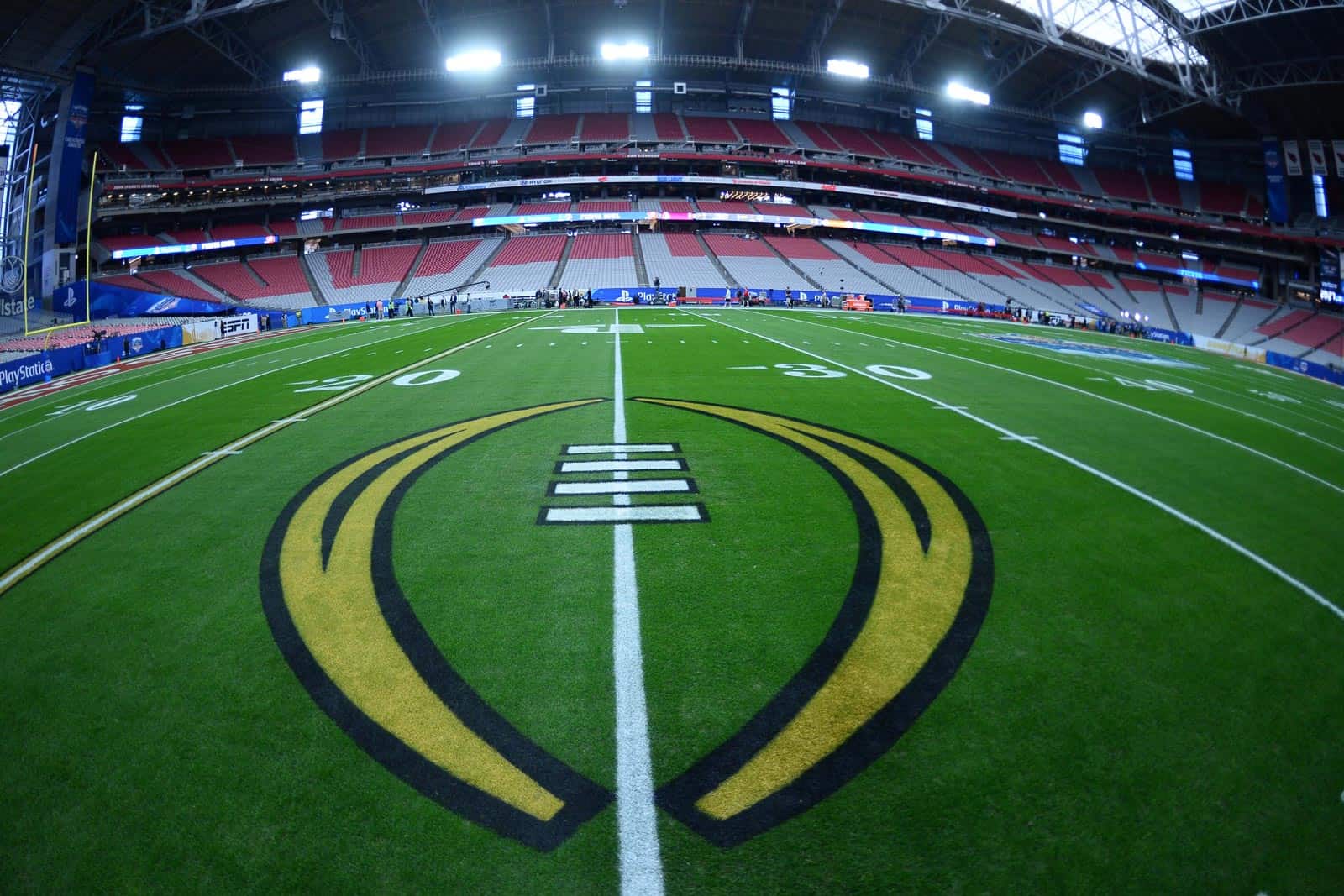 This is what you’ve been waiting for – it’s Saturday and you’re going to spend the afternoon and evening watching four teams vie for a place in the 2019-20 College Football Playoff National Championship.

Before the main attraction kicks off, keep in mind that there are two high-quality non-CFP contests on the college football bowl schedule worth watching, and both kickoff at Noon EST: the Camping World Bowl on ABC and the Goodyear Cotton Bowl Classic over on ESPN.

Both CFP Playoff games air on ESPN, so once you tune in there is absolutely no reason to switch channels. First up, it’s the Chick-fil-A Peach Bowl at 4pm EST (No. 4 Oklahoma vs. No. 1 LSU) and after that, at 8pm EST, it’s the PlayStation Fiesta Bowl (No. 3 Clemson vs. No. 2 Ohio State).

I wish I could buy you a beer, friend. Enjoy!

This is the first-ever football meeting between Notre Dame and Iowa State.

In a Saturday filled with much more meaningful action, don’t sleep on this one – the No. 9 passing attack in the Americas (Iowa State) trying to move the ball against the No. 3 pass defense in the nation (Notre Dame). Where the Cyclones have thrown for 300-plus yards on seven occasions this season, the Irish have held opponents to fewer than 155 air yards eight times. Only Clemson and Ohio State have allowed less. On the flip side, the common offensive thread in Notre Dame’s two losses this season is rushing yards. The Irish were held to 46 and 47 yards respectively at Georgia and at Michigan – also the only sub-100-yard performances in 2019. Iowa State is currently No. 34 vs. the run – compare that to the Bulldogs’ No. 3 ranking and the Wolverine’s No. 23 mark.

Iowa State: sophomore QB Brock Purdy (#15) (No. 5 in the FBS in passing yards per game)

Memphis is 4-7 in bowl play. It got nipped 37-34 by Wake Forest in last year’s Birmingham Bowl, also it’s fourth-consecutive bowl loss. The most recent win came in the 2014 Miami Beach Bowl, a 55-48 victory over BYU in double overtime. The Tigers have never beaten a current Power 5 member in a bowl game (0-3).

This is Memphis and Penn State’s first-ever meeting in football. The Tigers are 0-4 all-time vs. the current membership of the Big Ten.

Another pre-Playoff sleeper on Saturday, the Cotton Bowl pits Memphis’ superior offense against Penn State’s elite defense and the Tigers’ average defense vs. the Nittany Lion’s decent offense. The most compelling matchup is Memphis’ No. 8 ranked scoring machine (averaging 40.5 points per game) vs. Penn State’s No. 7 ranked scoring D (giving up 14.1 points per game). On one hand, it’s a Tiger offense that scored 34 and 29 points respectively in back-to-back wins over (21) Cincinnati, owner of the best scoring D in the AAC which prior to that had given up and average of 19.9 points per game. On the flip side, it’s the same Nittany Lion defense that held (2) Ohio State – the No. 1 scoring offense in America, averaging 48.7 points per game – to a season low 28 points. The only defensive component Penn State’s defense has struggled with is vs. the pass (No. 76 in the FBS), which is precisely what Memphis has been successful doing (No. 26). Though there are lots of angles to this one, can the Tigers keep up with the Nittany Lions, especially without their head coach?

Due to the departure of Mike Norvell to Florida State, Ryan Silverfield has been promoted to the head coaching role at Memphis. His debut will come in the Cotton Bowl. Silverfield joined Norvell at Memphis in 2015, serving first as the offensive line coach and then as deputy head coach.

A rematch of the 2003/04 and 1949/50 Sugar Bowls, Oklahoma and LSU have only met twice in history with both teams being ranked in the Top Ten on each occasion. The Sooners won the first meeting 35-0 and the Tigers triumphed most recently 21-14.

Oklahoma’s defense has certainly performed better this season, but LSU’s offense has blown up some of the best defenses in the country.

CLEMSON is 24-20 in bowl play. After beating then (3) Notre Dame 30-3 in last year’s Cotton Bowl/CFP Semifinal it most recently destroyed then (1) Alabama 44-16 in the 2018 CFP National Championship. The Tigers are 5-2 in CFP appearances.

A rematch of the 2016 Fiesta Bowl/CFP Semifinal, the 2013/14 Orange Bowl and the 1978 Gator Bowl, Clemson has never lost to Ohio State (3-0). The last time the two met was also the last time the Buckeyes appeared in the CFP bracket – a 31-0 shutout loss to the Tigers.

The bigger question is – who did each team earn its statistical achievements against and how will their numbers hold up against the best opponent they’ve faced this season?

What if I told you that of the 12 FBS teams that Clemson’s faced this season, NOT ONE is ranked better than No. 35 nationally is scoring offense or defense? The best defense the Tigers (again, they’re No. 4 in scoring) have faced in 2019 is Texas A&M, currently No. 36 in scoring D. Beyond that, five of the defenses Clemson has faced are ranked in the bottom third of the FBS in scoring. On the other side of the ball, the best offense the Tigers’ D (ranked No. 1 in scoring) has had to contend with is Wake Forest – No. 39 in scoring.

Logically speaking, Ohio State has earned its numbers against stiffer competition. But a weaker schedule doesn’t mean that Clemson is a weak team, a point which it proved by waltzing through last year’s CFP bracket, winning its two games by a combined score of 74-19.