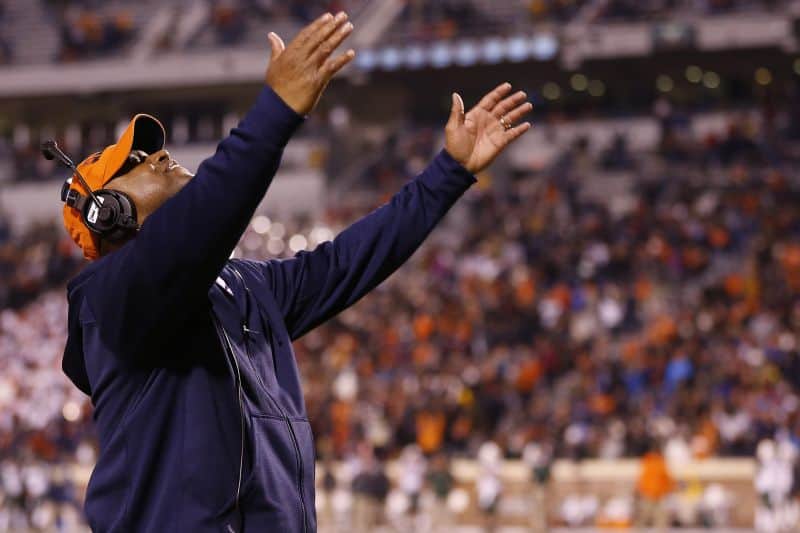 UVa's Mike London has -- inexplicably -- been given a vote of confidence BEFORE the 'Hoos play their rival. (Geoff Burke-USA TODAY Sports)

Well, friends, Thanksgiving week is upon us.  It is the week for Clean, Old-Fashioned Hate, the Egg Bowl, the Commonwealth Cup, the Battle of the Palmetto State and classic games around the country.  It’s also the time for tradition.  Whether you go visit family, brave the crowds at some random buffet restaurant or just veg on the couch and watch football, there’s always something for everyone to love this time of year.

It’s a time of tradition for me, too.  For those who don’t know — and that’s probably most of you — I’ve done sports radio for a longer while than I care to recap.  (Book me for podcasts.  I work cheap.  Pizza even works.)  One of the staples of my time in sports radio was something called The Sixer, where we would identify the six biggest games of the weekend, and the show’s thousands hundreds tens of listeners would cast their picks and try their lot for bragging rights amongst each other.  I’ve gotten out of that tradition of late, having become a high school football correspondent (which is so much fun — I cannot recommend it strongly enough, if you get the chance) and just finding myself eternally short on time.  This week, though, I bring that tradition to you for the first time in my three-plus years here at FBSchedules.  We’ll get underway here in just a second, but let’s first answer our trivia question!

Clear Your Schedule Trivia, Week 14 (answer at the end of the column):  In how many cities has the Virginia-Virginia Tech football rivalry been played?

The Sixer (all times Eastern and rankings AP)

Trophy:  “The original (Territorial) Cup is silverplate over a britannia base metal and was manufactured by Reed and Barton of Taunton, Massachusetts. It was a standard style trophy and priced at $20 ($439.89 in 2007 dollars) in Reed and Barton’s 1910 catalog. ” (link)

Print that, tweet that, whatever:  Both teams are still alive in the conference race, but need help.  Both teams need this win, for myriad reasons.  Should be a fun one.

Trophy (per Virginia’s sports information department):  “The Cup is made of marble and cherry wood, stands four feet high and weighs more than 100 pounds.  The scores of all 95 games in the rivalry are engraved on the sides of the trophy.”

Print that, tweet that, whatever:  This has to be the year London’s charges get Tech, doesn’t it? If they win, they’re in a bowl.  If they lose, London’s critics get even louder.

Print that, tweet that, whatever:  This very well may end up being the game of the week.  The consequences are huge on both sides, and Tech’s out for blood.

Print that, tweet that, whatever:  Mississippi State can still get to Atlanta with a win and a ‘Bama loss.  Ole Miss can still wreck their rival’s season.  Awesome.

Print that, tweet that, whatever:  This would be a monstrous win for the Gophers — possibly their biggest ever.  It’s tough to see a path for them against Wisconsin, though.

Print that, tweet that, whatever:  If Alabama wins this game, they get the prize (?) of playing an extra game in Atlanta.  Some advantage.

Before we get to the trivia answer, I just wanted to take a second and say a few words.

As thankful as I am to Kevin for doing what he does and allowing me to write for you guys each week, I’m equally — if not more — thankful to all of you for being here.  We don’t always agree — and that’s fine — but I’m so happy to be a part of such an intelligent and loyal group of fans.  I have “my” teams, sure, as we all do, though that’s become a bit muted with my doing what I do.  Your passion is always on display, and that’s what has always made me love this game.

From me and mine to you and yours, may you all have the most joyous and blessed Thanksgiving season possible, and I wish you fun and fellowship.  Safe travels to you all, and we’ll reconvene here next week to talk conference championships!

Trivia answer:  I asked earlier:   In how many cities has the Virginia-Virginia Tech football rivalry been played?

Five.  They are as follows:

Great games this weekend, thaks to all the writers who keep these post coming & Happy Thanksgiving to you as well!

The Iron Bowl is important for a couple reasons, none bigger than the SEC Championship Belt. Alabama is in possession of it again after beating MSU. They lost it to AU last season. I really need to post the entire history here since Punt On Third Down is now dead.

Outstanding synopsis of a really good football weekend.There are quite a few really good games to watch ,and a lot of folks will be stuffed with turkey and perhaps their favorite beverage sprawled on the couch or their favorite chair.
The stats furnished are certainly an indication of how one should be expecting things to turn out,but we all know that does not always apply.Great job,as usual.

Lots of good games this weekend. N.C. State at UNC will be one to watch!!!