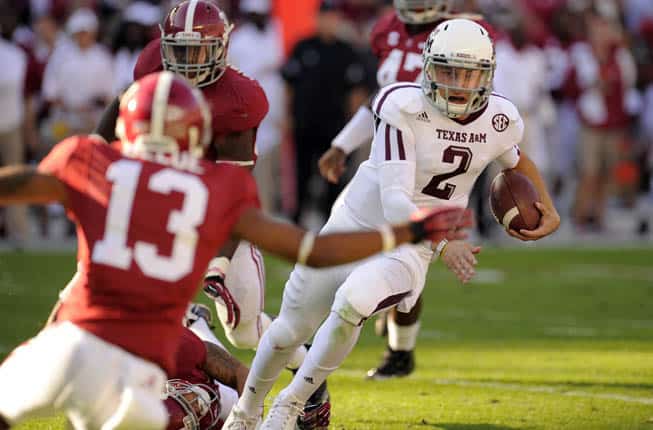 Another week, another string of victories for the Southeastern Conference. The league went 10-2 last week, with only South Carolina (losing to fellow SEC East member Georgia) and Florida on the wrong side of the ledger.

The conference schedule starts to get a bit more active this week, with two key matchups taking place. We’ll break down the Week 3 conference slate and look at some compelling storylines. First, though, we need to ask you a trivia question!

SEC trivia, week 3 (answer at the end of the column): Alabama has played at Kyle Field just once in the program’s history. That game was the final game at the university for which former Texas A&M head coach?

Program guide: The Crimson Tide enjoyed a bye week before making the trip from Tuscaloosa to College Station to take on the Aggies. As if Alabama hadn’t already had a year to process the 29-24 loss the Aggies delivered them at Bryant-Denny last year, the extra week gave Nick Saban’s club time to be reminded all over again. Alabama actually outgained A&M 431-418 in the contest, but a red zone interception by Deshazor Everett finished off the Tide’s comeback hopes. That turnover was the third by Alabama — two of them on McCarron picks — while none were registered by Johnny Manziel’s troops.

Things have changed a bit now, and the hunter is now the hunted. The Aggies are not sneaking up on anyone any longer, and neither is Manziel. Alabama held Virginia Tech’s Logan Thomas to a 5-for-26, 59-yard performance in week one, and they will look to keep the same pressure on Manziel. Johnny Football is enjoying much the same early success as last year, completing 35 of his first 50 passes for 520 yards and six scores, throwing just one interception. He also turned in an efficient performance in Tuscaloosa last year, completing 24-of-31 passes for 253 yards and two touchdowns.

Alabama had no answer for receiver Ryan Swope (11 catches, 111 yards, 1 TD) last year, and with Swope gone, Mike Evans will be a primary target in this contest. Evans has 13 catches for 239 yards and two scores on the season, and Evans has caught four or more passes in every game in which he has played as an Aggie. The Tide have a sophomore star receiver of their own in Amari Cooper, who had six catches for 136 yards in last year’s affair, including a 54-yard touchdown that brought Alabama within five points with 6:09 remaining.

Alabama needs a bounce-back effort from AJ McCarron. McCarron threw for just 110 yards in the opener, scoring once and getting picked off once. McCarron’s performance was the talk of Tuscaloosa in the days following the victory over Virginia Tech, and he quite obviously plays a large role in the success of the Tide’s offense. Texas A&M needs a larger contribution from running back Ben Malena. Malena is averaging 7.14 yards per carry in the early going of the season, and the bruising senior back will be needed to keep Tide defenders away from his quarterback. Malena carried 14 times for just 50 yards in Tuscaloosa last year.

Program guide: It’s very rare that a defensive coordinator loses his job after two games, but that’s exactly what happened to Texas’ Manny Diaz. Diaz’ defense gave up 550 rushing yards to BYU on 72 carries in a 40-21 loss last week, and Greg Robinson is now the Longhorns’ defensive coordinator. Numerous stories exist about Diaz’ alleged stubbornness in sticking with a five defensive back formation against a quarterback who completed just 9-of-26 passes for 129 yards, but it now appears that this is the final button left for Longhorn coach Mack Brown to push. The porous run defense simply must get better in order to stop Jeff Scott, Bo Wallace, Barry Brunetti and the Rebels.

Ole Miss piled up 532 yards of total offense against FCS opponent SE Missouri State last week, though not everything was perfect. Brunetti completed just 3-of-12 passes for 48 yards in relief of Wallace, doing little to inspire confidence as much more than a running change of pace quarterback. Scott received just four carries against SEMO, as his services were not required for most of the contest. The Rebs have a lot on which to focus on defense, primarily stopping punishing running back Johnathan Gray (6.21 yards per carry), but they also need to make a change on offense. With all of the changes in the Texas defense over the last week — and the increased focus on stopping the run — there is a chance for Wallace to get freshman wideout Laquon Treadwell more involved in the action. Treadwell caught nine passes against Vanderbilt in week one (a freshman record for the school), but notched just two catches for 27 yards last week. With Treadwell’s size (6’3″, 215 pounds) and the other weapons Wallace has available (freshman tight end Evan Engram and receiver Donte Moncrief are the headliners), Treadwell’s size and separation speed could cause big problems for the maligned Longhorns.

Trivia answer: I asked earlier: Alabama has played at Kyle Field just once in the program’s history. That game was the final game at the university for which former Texas A&M head coach?

Jackie Sherrill’s final game as the Aggies’ coach was played on December 1st, 1988. Alabama left College Station with a 30-10 victory in a game rescheduled from September because of Hurricane Gilbert.

Extremely well written synopsis of upcoming games.I like the ‘things to watch’,as well as the history of past contests.The Bama- A & M game is clearly the table setter,but Texas and Miss.could be key as well for obvious reasons.
As usual,your observations are spot on.