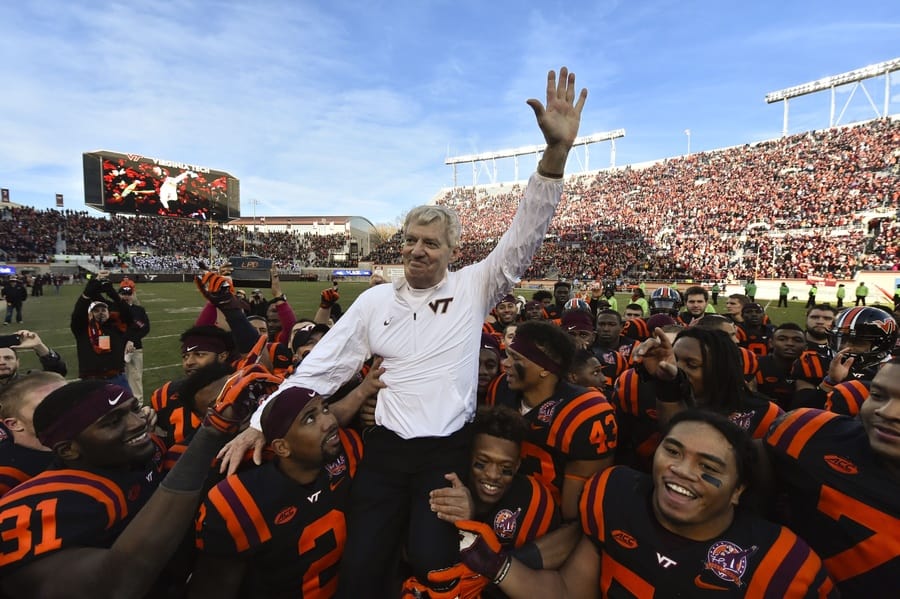 Well, everyone, it’s Thanksgiving here in the United States, and you know what that means.  It’s time for food, fellowship and a nice, long nap.  It’s also time to look at the ACC games we review each week — only in a slightly different manner than usual.

If you want to talk about turkeys, the real turkey comes when I try to predict games.  Sure, my record over on The Sixer isn’t bad, but I’ve always acknowledged that my better work probably lies in analysis, and not in predictions.  So, in honor of my friend Eric Taylor, I’m going to steal — or partially steal, anyway — a bit of his schtick.

Before we start, let me simply say that I’m thankful for all of you who continue to read my humble ramblings each week, and for the freedom to continue to talk to all of you about football each week.  May the holiday season bring the most bountiful of blessings to you and yours.

The trimmings:  Had Virginia Tech held on against North Carolina last week, this game could potentially have led Pittsburgh to a trip to Charlotte.  As it is, though, the Panthers could close out a 7-1 ACC slate and still end up with just a share of the Coastal Division title.  The Hurricanes, meanwhile, could finish having won four of five under interim coach Larry Scott.  There is still no word on the permanent coaching situation in Miami.

Carve that, serve that, whatever:  Pitt 31, Miami 24.  The Panthers look to close strong and take a share of the Coastal.

The trimmings:  This edition of the Palmetto Bowl had already lost quite a bit of steam, but The Citadel’s win in Columbia last week really did a number on this year’s edition.  Interim Gamecock coach Shawn Elliott will likely be making his final appearance on the Williams-Brice sidelines, while Pharoh Cooper will definitely be making his.  Clemson gets the interesting task of playing their cross-state rival this week — the team who provided the only victory this year against the team they will face in Charlotte for the ACC title next week.

Pumpkin pie:  Clemson has won 66 of the 112 meetings between the schools.  The Tigers’ 35-17 victory last season snapped a five-game South Carolina winning streak.

Carve that, serve that, whatever:  Clemson 38, South Carolina 17.  A lost season finally comes to a close for the garnet and black.

The trimmings:  Kentucky last beat Louisville in 2010 — the same year, coincidentally enough, in which they last appeared in a bowl.  The BBVA Compass Bowl hosted the Wildcats that year, though Pitt walked away with a 27-10 victory.  While the Wildcats look to reach their first bowl under Mark Stoops, the Cardinals look to improve their standing for a bowl of their own.

Pumpkin pie:  Kentucky leads Louisville by just one game (14-13) in series history.  Each team has won five in Lexington.  The Cardinals have won four in a row, following a three-game Kentucky string.

Carve that, serve that, whatever:  Louisville 28, Kentucky 21.  The Wildcats’ patience with Mark Stoops’ rebuild may get its toughest test yet on Saturday.

The trimmings:  Much of the talk this week has — for whatever reason — centered around Mark Richt’s job security this week.  That talk should quiet a bit going forward.  The talk about Paul Johnson’s job in Atlanta may not quiet so easily, however.

Pumpkin pie:  Georgia leads the series either 64-38-5 or 64-40-5, depending on whom you believe.  Georgia states:  Georgia leads the series 64-38-5 and doesn’t count two Georgia Tech wins during WWII (1943-44) when the Yellow Jackets utilized players from a naval officer’s training program hosted on campus.  The Bulldogs have won 12 of 14 games against the Jackets under Richt.

Carve that, serve that, whatever:  Georgia 24, Georgia Tech 21.  This one always seems to be tense.

The trimmings:  When Mike London looks back on his time at Virginia, this series will be one of the several nagging issues that dog his career.  London has yet to defeat the Hokies, and seeing as this is Frank Beamer’s final regular-season game leading Virginia Tech, the odds of that changing now look all the more dim.

Carve that, serve that, whatever:  Virginia Tech 27, Virginia 17.  So end the regular-season careers — likely — of the coaches at Virginia’s flagship schools.

The trimmings:  The less said about this game, the better.  Scott Shafer has already been fired at Syracuse (he’ll coach his final game Saturday), and Steve Addazio also has to be in some trouble.  Woof.

The trimmings:  Duke’s season just imploded after the controversial loss to Miami.  There’s no other way to say it.  The Blue Devils lost the next three after that game, giving up an average of greater than 46 points per game.  Duke is bowl-eligible, thanks to a hot start, but they need a win here to salvage what’s left of their year.

Pumpkin pie:  Duke has won 56 of the 95 all-time meetings between the schools.  The Blue Devils have won the last three in the series, snapping a 12-game losing streak to the Deacs.

Carve that, serve that, whatever:  Duke 24, Wake Forest 20.  Wake’s defense has been middling, and Duke is on a slide.

The trimmings:  Carolina didn’t look all that dominant against Virginia Tech last week, but it didn’t matter.  The Tar Heels still held it together and left an emotionally-charged Lane Stadium with a win and a division championship.  Now they get to face their Triangle rival, with a lot of pride on the line.  The ‘Pack have gone 3-4 since a 4-0 start, and a win here would go a long way toward bowl positioning.

Pumpkin pie:  The Tar Heels have won 65 of the previous 104 meetings between the schools.  State is 6-2 over the last eight, however.

Carve that, serve that, whatever:  North Carolina 35, NC State 31.  This should be a fun offensive battle that may come down to the final possession.

The trimmings:  Florida could still — potentially — win out and make the College Football Playoff.  Now, the words likely and potentially are two different things, so keep this in mind.  Florida has done some impressive things with the nation’s 100th-ranked offense this year, but if the Seminoles flex their offensive muscle early, confidence in the Gators’ ability to come back may be a problem.

Pumpkin pie:  The Gators have taken 34 meetings in series history.  This game will represent the 60th contest in the series.  The Seminoles have won just 10 times in 32 tries in Gainesville.

Carve that, serve that, whatever:  Florida State 24, Florida 21.  Florida’s defense is stout — this cannot be questioned — but this one could end in a late Seminole field goal.

Right you are – they’re playing for the 107th consecutive year, and I inadvertently used that number instead of the total. Thanks for the catch!

Love the column, can’t believe this is the final week of the season! It goes by way to fast!! Go Jackets! THWG!!

Tell me about it. It seems as though I was just writing the first column of the year! There’s still more to come, though, so stay tuned.

By the way, I wouldn’t be at all surprised if Georgia Tech wins. That one should be a classic.

I agree with all of the predictions/Every thing seems reasonable to me.Go Clem.