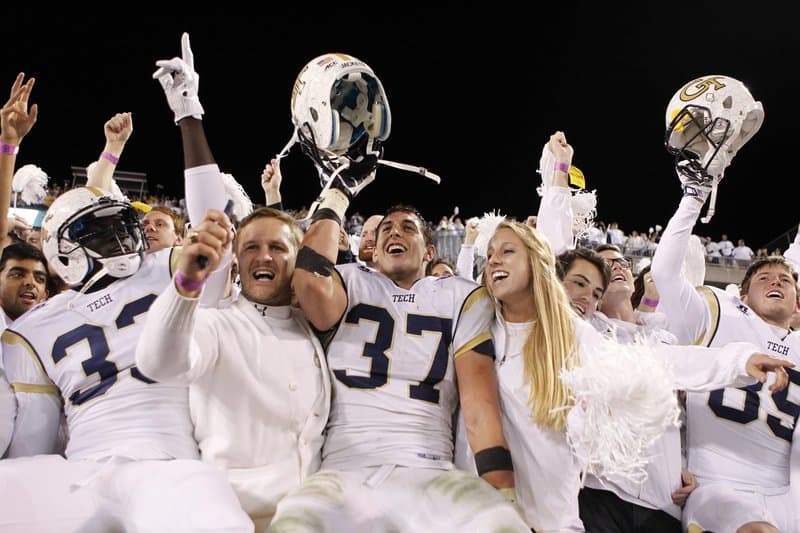 Georgia Tech looks to go 3-0 in ACC play and take a half-game lead in the Coastal. (Brett Davis-USA TODAY Sports)

You may recall before last week’s breakdowns that I mentioned there were no real marquee games in the ACC last week, and that allowed the conference to largely escape the absolute craziness that was last week in college football.  Just about every result went according to plan.  Of course, there are some confusing things still going on around the conference, but we’ll get to those later.

Six games involving conference teams will kick off on Saturday, with trips to New York, Florida, Georgia, the Carolinas and Indiana in the offing.  “Kinda-sorta” conference member Notre Dame makes their first of three remaining appearances on the ACC slate this week, and depending on what happens in Atlanta, Virginia could be in sole possession of first place in the Coastal.  Pause and process that for a second.  Virginia.  In first place in the Coastal.  To quote a legendary vocalist, strange days, indeed.

The bus is warm, and your seat is ready.  Before we leave the station, let’s pose this week’s trivia question!

ACC Trivia, Week 7 (answer at the end of the column):  Pitt’s James Conner’s 83 yards against Virginia last week places him second among national rushers with 873 yards.  Just four backs have cracked the 800-yard mark at this point in the season.  Besides Conner, name those other three backs.

We’ll stick with the Keyword Search feature for all our games this week, so away we go!

Print that, tweet that, whatever:  It might be the biggest upset of the year if FSU’s streaks end this weekend.  That’s saying a lot, after last week.

Print that, tweet that, whatever:  Cincy has a nice club, but facing a top-20 defense with a backup — admittedly experienced, sure — is a tough out.

Print that, tweet that, whatever:  Will the November 1 GT matchup with UVa decide the Coastal, or will all hell break loose again? Depends on which Duke team shows up.

Print that, tweet that, whatever:   Both teams have successful freshman quarterbacks, but Watson has completely transformed the Tiger offense.

Print that, tweet that, whatever:  BC has the best run game in the conference, but if NC State is going to crack the streak, it’s gotta be here.

Print that, tweet that, whatever:  Those who are sick of hearing about Notre Dame will likely be force-fed more ND love for another week.

Trivia answer:  I asked earlier:  Pitt’s James Conner’s 83 yards against Virginia last week places him second among national rushers with 873 yards.  Just four backs have cracked the 800-yard mark at this point in the season.  Besides Conner, name those other three backs.

Mighty fine synopsis of the weekend games.The Duke-Ga.Tech game is perhaps the front runner.That game is big for both teams.

I think gurley was set up. the ncaa needs to change this rule . so wait if he signs his autograft , hell its his to sale. he need the money to go to school. ncaa get a life.. all your doing is punishing a whole team for nothing.