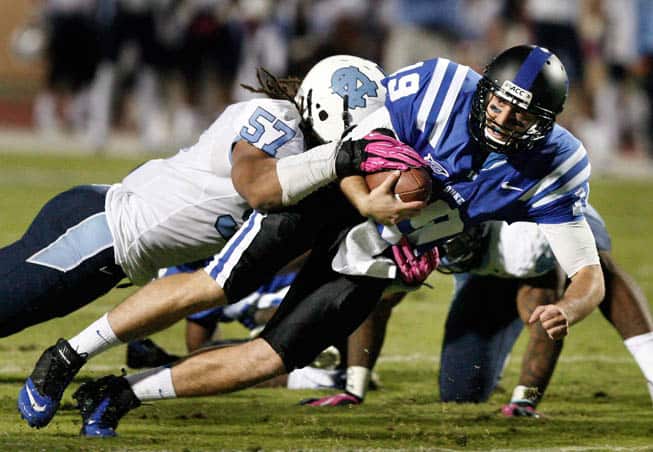 (Author’s note:  This article contains games in which the ACC team is the home team.  For any SEC-ACC matchups in SEC stadiums, please visit the SEC edition of Clear Your Schedule.)

Brace yourselves, friends.  We are 60 minutes from the Duke Blue Devils earning a trip to Charlotte to play for the ACC Championship.  Let that wash over you for a bit.  The Blue Devils need only to beat North Carolina to make that happen.  That game joins five other games on our conference slate this week, as we close out ACC play.  The conference boasts ten bowl-eligible clubs, and many of those clubs have a chance to better their standing this weekend.

The ACC describes the championship scenarios as follows:

We’ll take a look at our six games in our Keyword Search format, but before we do, here’s our trivia question!

Trivia answer:  I asked earlier:  Georgia and Georgia Tech did not play between 1917 and 1924.  Why was this the case?

Georgia did not field a team in 1917 and 1918, due to participation in World War I.  Georgia’s students held a parade in 1919 to tease Georgia Tech for their lack of program cancellation during the war.  This inflamed already strained relations between the two schools, and they did not again play until a “truce” — such as it was — was called in 1925.

Though Thanksgiving has passed, I wanted to take a moment to thank you all for your support of this column and FBSchedules through the year.  It is a true privilege to be able to talk ACC football with you each week, and we’ll be back in this space for the conference championship game, bowl season and the 2014 conference slate! My best to you and yours this holiday season, and let’s hope for a great postseason!

Very good review of weekend schedule.A lot of things are on the line here,with Duke having the most to lose.It is hard to imagine that a 4 loss team could be in the championship over a 3 loss team.Duke has to win today,or hope that VA. can finally look like a football team,instead of a doormat.Great stuff,Brian,as usual.