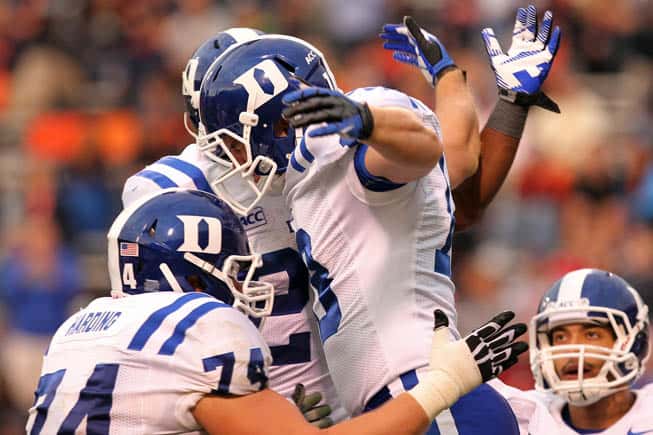 It seems as though college football just started yesterday, but we find ourselves just two weeks away from the prime time affair in Charlotte to determine who represents the ACC in the BCS. Many of the storylines have played themselves out in this space over the last 12 weeks, but we still have several questions left unanswered.

Since Thanksgiving is approaching here in the United States, we’ll take a little different look at this week’s games than usual. We’ll prepare you for your ACC football “dinner” (as well as the important one next Thursday) with three courses on each game. Clear your schedule — or your plate — and gather around the table with us! Before we proceed, here’s the ultimate appetizer — our trivia question!

ACC Trivia, Week 13 (answer at the end of the column): BC’s Andre Williams rushed for 339 yards last week against NC State, breaking a 20-year-old ACC record held by Maryland’s John Leach (329 yards). Who holds the FBS record for most rushing yards in a single game?

Stuffing: Wake Forest owns the lowest points per game average (17.8) in the conference. The Deacs’ scoring average is even lower against conference opponents (14.7). Duke averages 34.9 per game, with a reasonably consistent 33.8 points against ACC foes. The Blue Devils’ scoring offense is third-best in the ACC and 35th in the FBS. Wake Forest, conversely, is 115th in the FBS.

Turkey: The longest winning streak the Deacons have ever enjoyed against a conference team ended last season, as Duke defeated Wake Forest 34-27 in Winston-Salem. That victory brought to a close Wake’s 12-game winning streak against Duke. Duke’s longest winning streak against Wake Forest is also 12 games, though that streak ended in 1963. Sean Renfree completed 22-of-28 passes for the Blue Devils in last year’s game, with receiver Desmond Scott snaring 11 passes for 134 yards. Duke was also the first team to ever beat Wake Forest’s football program, doubling up the Deacons 8-4 in 1889.

Pumpkin pie: Before this season, the last time Duke beat two top-25 teams in the same season came 32 years ago. The Blue Devils beat 19th-ranked South Carolina and tenth-ranked Stanford in 1971. Virginia Tech (then-16th) and Miami (then-24th) have fallen victim to David Cutcliffe’s team this season. The last time Duke played a game while ranked in the AP Top 25 was the now-defunct Hall of Fame Bowl in 1995, which Duke lost 34-20 to Wisconsin.

Stuffing: Virginia holds three straight victories over Miami. The games have been decided by a total of 13 points. Wahoo quarterback Mike Rocco — who has since transferred to Richmond — engineered a 41-40 victory over the ‘Canes last season, which was capped by a 10-yard strike to Jake McGee. Rocco completed 29-of-37 passes for 300 yards and four scores.

Pumpkin pie: The Cavaliers rank no higher in any major offensive or defensive category than 73rd (passing defense). Miami only ranks lower than 73rd in one category (rushing defense, where they rank 74th). The Hurricanes are surrendering an average of 536.3 yards of offense over the last three games, all losses. Opponents have gained 500 yards on Miami in four of the last five games. Virginia started ACC play strong, allowing just 199 yards against Pittsburgh. They have, however, allowed 494.4 yards per game in conference contests since that game.

Stuffing: ODU is attempting to avoid an 0-3 record against ACC clubs. The Monarchs were defeated 47-10 at Maryland and 35-24 at Pittsburgh. The two teams share another common opponent in East Carolina. The Pirates defeated ODU 52-38 in Greenville, then notched a 55-31 win in Chapel Hill.

Pumpkin pie: North Carolina is one win away from bowl eligibility after being ineligible to compete in postseason play last season. This would be the Tar Heels’ fifth bowl appearance in six years (Meineke Car Care Bowl in 2008 and 2009, Music City Bowl in 2010 and Independence Bowl in 2011). UNC’s only victory in those games came in a double-overtime affair against Missouri in Nashville in 2010, which the Tar Heels won 30-27.

Stuffing: The Citadel play-by-play voice Danny Reed points out that The Citadel’s 6-0 victory over Clemson in Florence, South Carolina in 1931 was the catalyst for Clemson’s IPTAY program. The program has grown to astronomical levels, with IPTAY members receiving special benefits within Clemson athletics.

Turkey: The Citadel is dead last in the FCS in passing, averaging 91.4 yards per game. Don’t let that statistic fool you, though, as the Bulldogs run the triple option offense. The Citadel excels in the ground game, averaging 282.1 yards per game on the ground. This total is good for fourth in the FCS. Clemson is seventh in the ACC in rush defense (151.5 yards per game). The Tigers allowed 248 rushing yards and four touchdowns to Georgia Tech in their last game. The Yellow Jackets also run a modified option offense.

Pumpkin pie: This game will mark Military Appreciation Day at Clemson. The school has an extensive list of activities planned to honor those who serve, including flyovers from six Warbirds, an appearance from The Citadel’s Summerall Guard and a special halftime show from the Tiger Band. Current Tiger receiver and Purple Heart recipient Daniel Rodriguez carried the flag in leading the Tigers down The Hill in last year’s Military Appreciation Day game against Virginia Tech.

Stuffing: The Orange joins Ohio State and Wisconsin as the only teams to have avoided surrendering a hundred-yard rusher in a game this season. This is unlikely to change in this contest, as the Panthers average just 57 rushing yards per game against ACC teams. Pitt has rushed for fewer than 50 yards in three conference games (8 vs. Virginia, -5 vs. Georgia Tech and 46 last week vs. North Carolina.

Turkey: These teams have played 68 times in their history, but just once with both schools as part of the Atlantic Coast Conference. Both schools regularly faced off in the Big East Conference as part of a series that began in 1916. Pitt has won 34 of the games in the series, with three ties. Syracuse snapped an eight-game streak of Pitt victories last year, defeating the Panthers 14-13. Orange quarterback Ryan Nassib completed 19-of-30 passes in the victory, throwing for 185 yards.

Pumpkin pie: Though Pitt certainly experienced their share of struggles last week against North Carolina, Syracuse allowed 59 points and 523 yards of offense to Florida State last week on just 45 offensive plays. Florida State’s previous low number of plays in a game this season was 61 plays in a 54-6 victory over Bethune-Cookman (FCS). FSU only gained 492 yards in that game.

Stuffing: East Carolina possesses one of the most high-powered offenses in the FBS. The Pirates rank 30th in total offense, averaging just over 463 yards per game. Starting quarterback Shane Carden ranks seventh in total offense, putting up 336.3 yards per game. Ruffin McNeill’s club was held to a season-low 204 yards in a 15-10 loss to Virginia Tech in September, but has gained 373 yards or greater in each game since. A 63-14 victory over UAB last week saw ECU gain 625 yards.

Turkey: The teams played 18 games in their series before playing outside Raleigh for the first time. ECU went 6-12 in those games. ECU won the most recent affair between the two, taking home a 33-27 overtime victory in Dowdy-Ficklen Stadium in Greenville in 2010. Two future NFL quarterbacks battled in that contest, as current Falcon Dominique Davis (37-of-53, 376 yards, 2 TD) got the better of current Seahawk Russell Wilson (26-of-52, 322 yards, 1 TD, 3 INT).

Pumpkin pie: Coaches Ruffin McNeill and Dave Doeren have done battle before, but not as head coaches. McNeill was an assistant for Mike Leach at Texas Tech, while Doeren assisted Mark Mangino at Kansas. Texas Tech won both games (2004 and 2005).

Stuffing: Alabama A&M’s top-ranked defense (FCS) has shut down opponents all season. The Bulldogs allow just greater than 119 rushing yards and 211 passing yards per game. Opponents average just 3.27 yards per carry against the Bulldogs, which will be vital in slowing down Georgia Tech’s powerful option run game.

Pumpkin pie: Neither team is likely to light up the scoreboard through the air. Alabama A&M averages just 188.5 passing yards per game (145-for-326), while Georgia Tech ranks last in the conference in passing, throwing for 126.8 yards per game (74-for-156).

Turkey: Both teams gained bowl eligibility with victories last week. The Eagles defeated NC State 38-21, while Maryland earned a 27-24 overtime victory over Virginia Tech in Blacksburg. CBS’ bowl projections have Boston College facing Rice in the Heart of Dallas Bowl, while Maryland and North Texas are predicted to face off in the Military Bowl in Washington, D.C.

Pumpkin pie: Boston College is looking to run its win streak against the Terps to three before Maryland exits the ACC after this season. BC has won four of the last five in the series and seven of ten overall.

Stuffing: Idaho is playing the season as an independent. They will return to the Sun Belt Conference in 2014. The Vandals have played three ranked teams this season, falling to Northern Illinois, Fresno State and Ole Miss. The Seminoles and Vandals have never faced off on the gridiron.

Pumpkin pie: This is Idaho’s first game this season to be played on natural grass. Idaho’s home stadium, the Kibbie Dome, is outfitted with RealGrass Pro, while Idaho’s road games have been played on FieldTurf (or similar) surfaces.

A lot of ‘trap’ games this weekend that could cause upsets if teams are sleeping thru the first half.The two games that get my attention are Duke-Wake and B.C.-Maryland.There are some things worth playing for in these games ,so I am expecting Duke to show up big,and B.C. to get itself settled in to the playoff picture.

Kevin, Syracuse is 3-2 in the conference and 5-5 overall.

UNC won in double overtime to Tennessee, not Mizzou. Mizzou whooped our tails in the independence bowl one year later. Excellent write-up, I read ’em each week.

Nice catches, folks, particularly on the Syracuse error. That came directly from the conference, but I totally missed it.

I appreciate your readership and the kind words. You keep reading, I’ll keep writing. Stay tuned for year two of our in-depth bowl previews. :)