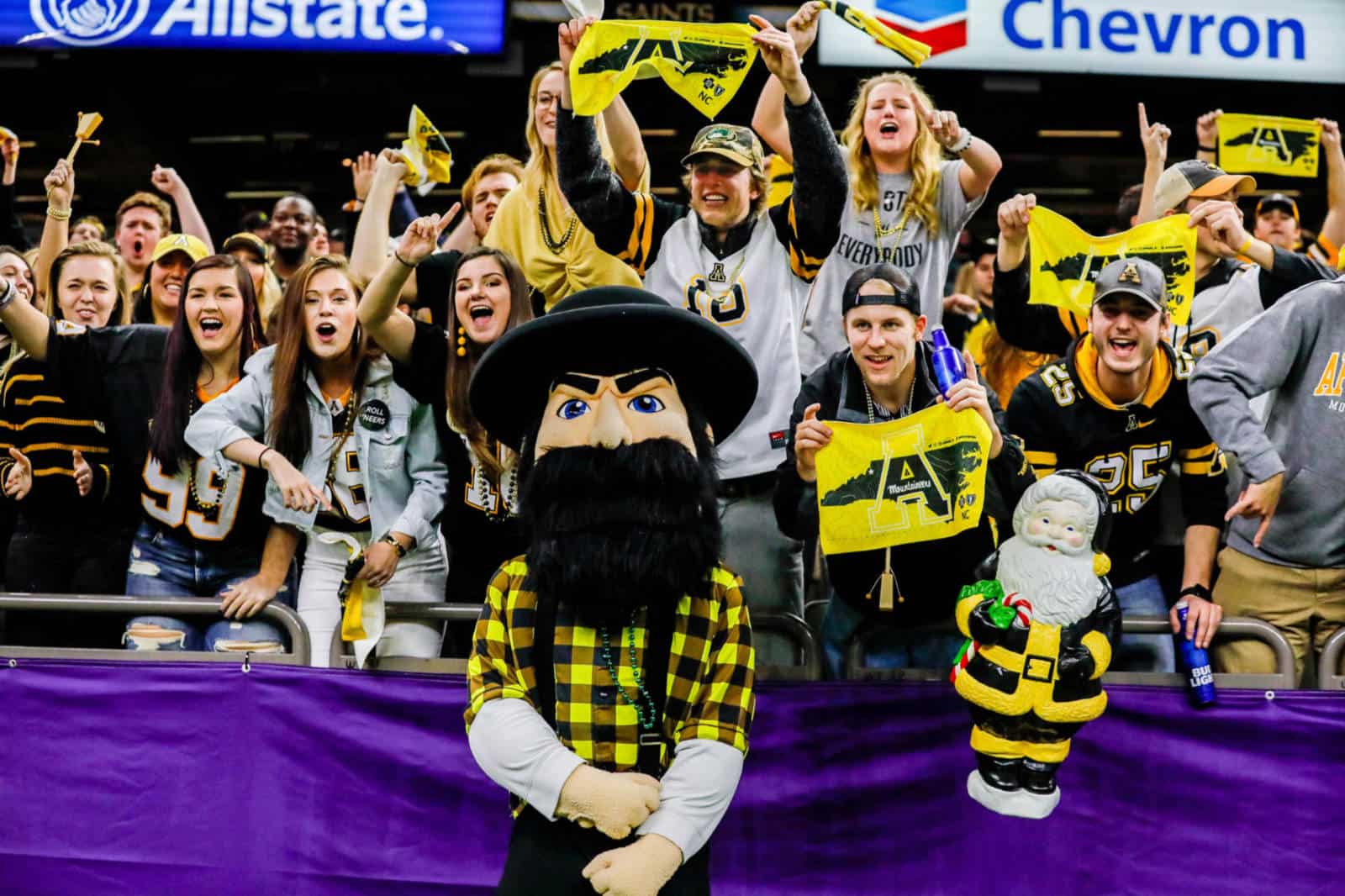 It’s that time. The internet is shrouded with anger, sides have formed, memes are flowing, fans are roasting other fans, and everything has turned into a wasteland.

No, this isn’t about an election, or a chicken sandwich.

The first College Football Playoff rankings have been released, and I’m going to tell you what they mean, in the words of the greatest college administrator ever to hold a job.

All the screaming, the message board posts, the tweets, the angry phone calls to balding sports talk radio hosts…it all means literally nothing. It’s all contrived nonsense to make people do exactly what people are doing. I’d say to go outside and enjoy the weather, but it’s supposed to be frigid here in the southeast this weekend, so ixnay on that idea.

MOVING ON, since we talk about more of the not-front-page stuff in this feature…

You know how this works. We’ll ask you a trivia question, go over the three games we watched last week, give you three to watch this week, answer that trivia question, and try to keep it light in the process. Let’s do what I just described.

TRIVIA:  Dartmouth and Princeton face off Saturday in Yankee Stadium. In what professional stadium has Dartmouth played the largest number of games in its history?

Charlotte 34, Middle Tennessee 20:  We envisioned this as a battle of quarterbacks (oops – well, kinda oops), and the 49ers decided to run the ball 55 times in the victory. 16 of Charlotte’s 25 first downs moved the sticks via the ground, en route to 76 offensive plays from the home side — nearly 30 more than the visitors could tally on offense.

Asher O’Hara was the primary offensive threat for Middle, as we anticipated, completing 9-of-17 throws for 118 yards and two scores against a pick. O’Hara also paced the Blue Raiders with 148 yards on 15 carries. No other Middle ball carrier logged more than four attempts, and no receiver hauled in greater than two passes.

Charlotte’s Chris Reynolds hit on 14-of-21 aerial attempts for 192 yards and a score, joining his 103 rushing yards on 16 carries. Aaron McAllister galloped for 104 yards for the 49ers, adding a touchdown of his own.

The 49ers are now set up for a bowl berth with at least a win in their final three outings, with two out of three likely netting Will Healy’s club a fairly decent game in his first year at the helm. Some projections — as skeptical as we are of them — have the 49ers venturing about 15 miles south on Interstates 85 and 77 to face off with Virginia Tech in the Belk Bowl. Middle, meanwhile, has to win out — admittedly, stil possible — and hope for a number of bigger conferences to miss out on filling their allotments.

Florida Atlantic 35, Western Kentucky 24:  The battle for supremacy in Conference USA (well, half of it, anyway) goes to the Owls. FAU quarterback Chris Robison connected on 18-of-29 throws for 208 yards and two scores, with the two touchdowns coming on back-to-back possessions at the close of the second and beginning of the third periods. WKU passer Ty Storey had another big game, going 32-of-47 for 380 yards and two touchdowns of his own; though, to be fair, his three picks were significantly costly for his side.

The key statistic for WKU, though, was its tallying of just 64 rushing yards on 26 carries. We covered WKU’s rushing struggles in the game preview, but that total was not even half of what the ‘Tops compiled against Marshall the week prior.

FAU now wrests control of C-USA East, and, as we mentioned last week, will likely have to go through Ruston to win a league title.

Weber State 36, Sacramento State 17:  So much for that win streak by the Hornets. Sacramento State quarterback Kevin Thomson was injured during the game, which clearly hampered his club. Thomson connected on 9-of-18 passes for 144 yards and a score, with backup Jake Dunnaway going 12-for-24 for 154 yards and another score, but with two picks.

Irrespective of whomever was at quarterback, the Hornets’ inability to move the sticks on third down proved lethal. Weber State held Sac State to 3-of-14 on third down, which held the Hornets under 24 minutes in time of possession. Sacramento State also rushed 26 times for just 84 yards, allowing Weber State to focus on defending the pass.

Amazingly, Weber found itself outgained, 382-372, and outpassed by well over 100 yards. The Wildcats, though, rushed 52 times for 195 yards, which allowed them to keep the Sacramento State offense off the field, and hold the Hornets at bay.

Weber State now stands alone atop the Big Sky at 5-0, and has vaulted all the way to number three in both the STATS Top 25 and Coaches Polls. Assuming the Wildcats hold on to win the Big Sky, they appear a certainty to get a top seed in the NCAA playoffs and play at home all the way through the semifinals.

This game of already incredible significance takes on even more as the Tigers and Big Green take to the grass in the Bronx.

Dartmouth coach Buddy Teevens told the Washington Post of the matchup,”“I’m a big believer in life experiences. Playing in Yankee Stadium will be a life experience for our players.”

Princeton enjoys a pretty prolific passer of its own. Quarterback Kevin Davidson paces the Ivy in nearly every category, connecting on 149-of-212 throws for 2040 yards and 19 touchdowns against just three interceptions. Receivers Jacob Bermelin (Princeton) and Drew Estrada (Dartmouth) rank fourth and fifth among Ivy receiving leaders, respectively, having tallied 602 and 577 yards on the campaign.

The defenses are equally up to the task, though, with Dartmouth ranking ninth and Princeton 14th among FCS units. Dartmouth surrenders just shy of 299 yards of offense each game, with Princeton just shy of 320. The Big Green have only allowed a staggering eight touchdowns to opposing offenses, with Princeton surrendering just 12.

With a history of close battles between these teams, those two defenses, and the significance of this game, expect to see a heavyweight battle from the opening whistle to the final play in this one. This should be a classic befitting of the venue slated to host it.

Okay, I should bury this, but I’m contractually obligated to include it every time I cover an App game.

Okay, now that you’ve watched that a time or ten (welcome back!), let’s move past that sweet organ solo in the middle and on to the game.

The Mountaineers come into their third nationally-televised game in a row smarting a bit, having fallen, 24-21, to Georgia Southern in the muck and mire in Boone last Thursday. Georgia Southern outworked App in every rushing category, as the triple-option devotees are wont to do, with a Shai Werts 55-yard scamper putting the Eagles ahead, 24-7, just into the third. Zac Thomas found Corey Sutton on back-to-back touchdown throws to bring the Mountaineers to within a field goal, but the home side could close the gap no further.

Thomas connected on 25-of-51 throws in that game for 271 yards and three scores, with a touchdown toss to Malik Williams joining the two to Sutton. The tandem of Williams and Sutton hauled in 14 throws for 157 yards and those three touchdowns. Darrynton Evans rushed 17 times for 76 yards in the contest, adding to his third-best rushing average in the Sun Belt, at just shy of 100 yards per game. Sutton, Williams, and Thomas Hennigan are all among the top 10 in receiving yards in the conference.

South Carolina, conversely, hits the Williams-Brice grass having snapped its two-game skid with a 24-7 decision over Vanderbilt last week. The Gamecocks mauled the Commodores in every way possible, doubling — or even tripling, in some cases — their output. The Gamecock defense held Vanderbilt to just 76 passing yards in the contest, which is boggling, even considering that the Commodores used two quarterbacks. Speaking of quarterbacks, Ryan Hilinski turned in a stellar effort in the win, going 24-for-31 for 235 yards and two touchdowns.

We’ve long bashed the SEC — justifiably so — in this space for its…well, let’s call it questionable late-season scheduling, but this is an outstanding game. Eliah Drinkwitz’ club is as offensively capable as many SEC clubs, if not more so, and stands to keep this plenty respectable. The stakes are further ratcheted when you consider that Carolina really needs this game to bolster its bowl case. The Gamecocks close the season with a trip to Kyle Field and a home game with Clemson, needing wins in at least two of those final three to become eligible for a postseason bid.

Finally, I’ve long since stopped believing in bulletin board material, but our good buddy John Hooper (whom we got to see Tuesday, by the way, which is always a pleasure) passes this along:

“SC will get a bit of a break this weekend when it faces App State” Julia Morris WYFF News Channel 4. I don’t think she meant it this way, but still shouldn’t have been said. Now, Morris is very good at her job and I am smart enough to realize someone else probably wrote it.

To put a fine point on it, the days of App being a break for anyone not named Alabama or Clemson are likely long-gone.

We’ve covered both of these teams in this space this year, so there’s not a ton new to add. The item of significant note here is that Boise can — for all intents and purposes, anyway — take the Mountain Division with a victory here. The Broncos do have a game at Utah State in two weeks that could still provide some drama, but the victory they secured over Air Force earlier this year would combine with a victory Saturday to provide that result.

Wyoming, for its part, has nicely bounced back from a loss to San Diego State with big wins over New Mexico and Nevada. The thing that has to alarm Cowboy fans is the Wyoming pass defense, currently ranked next-to-last in the Mountain West at nearly 289 yards allowed per tilt. The Broncos are averaging nearly 279 aerial yards against Mountain West clubs, even with two shrug-worthy performances against BYU and San Jose State.

Boise has taken 12 of the 13 games the two have contested as Mountain West members, with the lone loss for the Broncos a two-point decision in Laramie in 2016. A 13th in 14 means the Broncos are in solid shape for battling for another MWC crown, and maybe that coveted New Year’s Six bowl bid. A loss, though, and Wyoming suddenly finds itself controlling its own destiny. Were that to happen, the Cowboys’ season finale in Colorado Springs would likely be for all the marbles.

And no, before you ask, there’s no snow in the forecast for Boise on Saturday night. This is all the more unfortunate for those of us who love watching snow games on television, but hate the real thing.

TRIVIA ANSWER:  We asked earlier:  Dartmouth and Princeton face off Saturday in Yankee Stadium. In what professional stadium has Dartmouth played the largest number of games in its history?

Dartmouth played 13 games in the now-defunct Polo Grounds, winning seven and tying one. The last of those games was a 14-3 loss to Stanford, played on December 2, 1939.