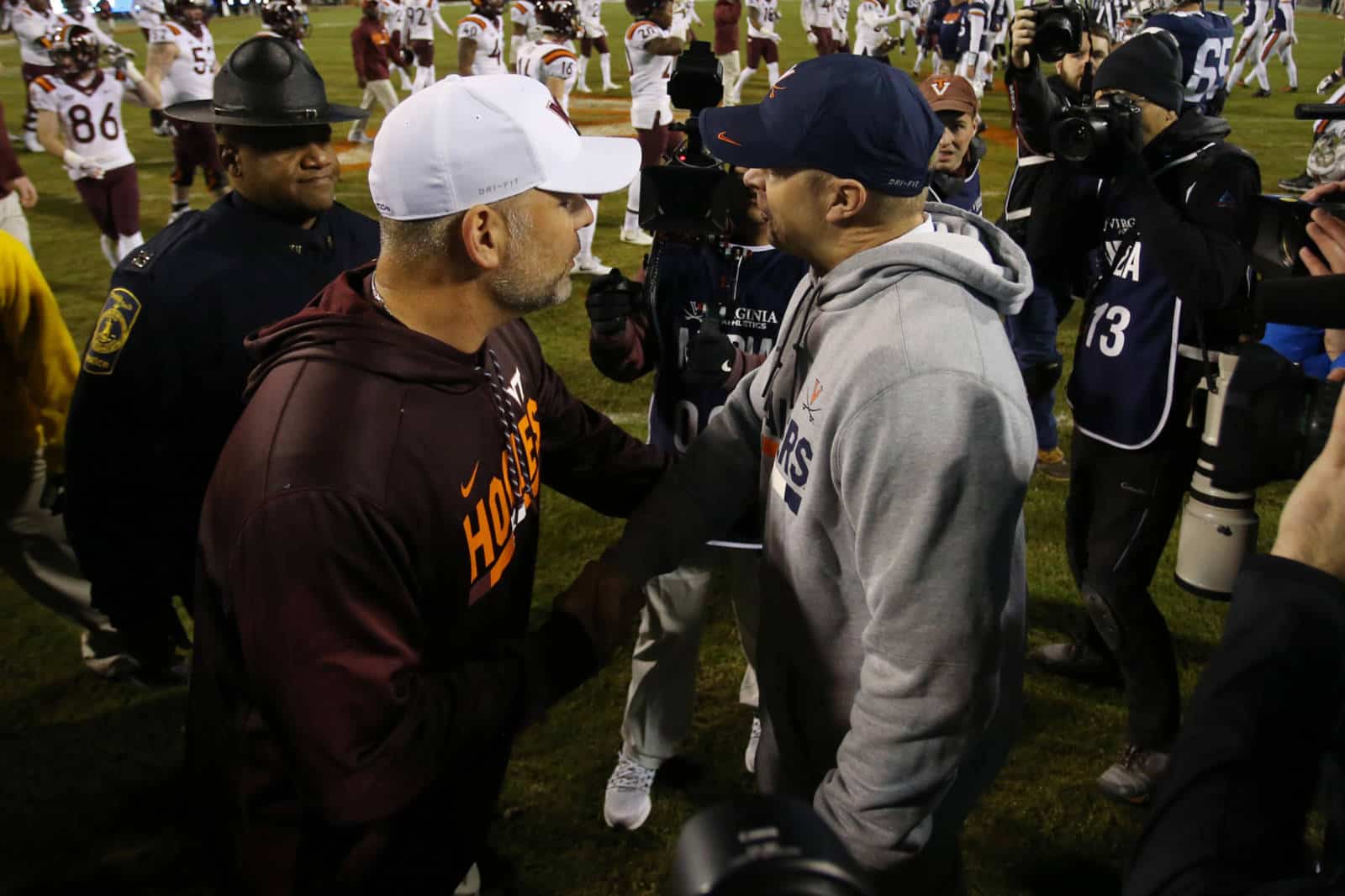 I normally start off the piece with something pithy, but a) it’s Thanksgiving week, and b) it’s our season finale. I’ll have some parting words after we look at our games, but for now, let’s just get to it. Before we do, here’s a doozy of a trivia question.

TRIVIA (answer at the end of the column):  What was the first game we covered in this feature in 2012?

Montana State 48, Montana 14:  Both of these teams are national seeds, so there was little consequence to this one, other than claiming bragging rights in the Brawl of the Wild.

Boy, did the Bobcats do that.

MSU went for 27 first downs and ran for just shy of 400 yards — compared to Montana’s 46 — in the victory. The Bobcats punished the Grizzlies with 62 carries in the contest, hitting the paint six times in the contest. Isaiah Ifanse and Logan Jones both sailed past 100 yards rushing, with Ifanse nearing 200.

Montana State will host the UAlbany/Central Connecticut State winner in round 2 of the FCS playoffs, while Montana will welcome the Southeastern Louisiana/Villanova victor.

Charlotte 24, Marshall 13:  Charlotte is bowl-eligible for the first time in school history, and — well, let’s just sum up that game with these two tweets:

Our guy was on @jimrome's show today, talking about #ClubLIT.

"My wife wants to know why that's my go-to, taking my shirt off, but to me it's just enjoying success."
— @Coach_heals

The Broncos stomped the Aggies en route to another systematic takedown of the Mountain West Mountain Division, and have just Colorado State in front of them before playing for yet another conference crown.

It was said on a podcast this week that this game is “signing up for the right to get killed by Clemson”, and yeah, that’s probably accurate. However, as someone who once ran on the field following a UVa-Tech game — and a native son of the Commonwealth — my eyes will be completely affixed to this tilt.

The Hokies have won 58 of the 100 all-time matchups, and Virginia has won just three times since this became the Commonwealth Clash (note:  most Virginians don’t call it by this name) in 1996. In fact, Virginia’s only win in the rivalry this century came in 2003, as Matt Schaub (who is, miraculously, still playing in the NFL) and Wali Lundy paced the 7-5 ‘Hoos past the 8-4 Hokies in Charlottesville.

This matchup — oddly — features the 10th and 11th-ranked offenses in the ACC, as they are separated by .4 yards per game. The Hokies (381.4 ypg) have eclipsed the 450-yard mark three times in the last five outings, but turned in a somewhat pedestrian 263-yard finish in last week’s blanking of Pittsburgh. UVa has turned in the same results in its last five; however, the Cavs have a 500-plus yard result (517 against North Carolina), and nearly broke the mark again last week (499 vs. Liberty).

On the defensive side, these are the fourth and fifth-ranked clubs, with neither side ceding greater than 350 yards per tilt. Aside from Carolina gashing UVa for 539 yards, no team has cracked the 400-yard barrier against the ‘Hoos, while four clubs have pulled the feat against the Hokies. Given each team’s dynamic quarterback (Bryce Perkins for UVa, Hendon Hooker for Tech), the ability to keep edge contain and show gap integrity will be vital.

Look, we all know it. Vegas knows it. This game should come down to a possession, maybe near the end. Wacky stuff always happens in rivalry games, which we also know, so expect the unexpected. This game, though, will be the true test of whether Bronco Mendenhall has turned the tide in Charlottesville. A win for the first time in 16 years hangs a flag in Charlottesville, and gets a huge burden off the backs of the ‘Hoos.

This contest could be the first of a two-game American championship series between the Bearcats and Tigers. Cincinnati has already clinched its spot in the championship tilt, with Memphis still fending off Navy in the West Division. In what will be the fifth contesting of the championship, the two sides have never met for the crown.

Memphis’ sports information department notes that this is the fourth time in school history that the Tigers have opened a season by winning 10 of their first 11. Three of those times have come in the last six seasons (2014, 2017, and this season), and an 11th win would send Memphis to a rematch with Cincinnati. The Tigers will heavily lean on quarterback Brady White, who ranks fourth in the circuit in total offense at greater than 275 yards per contest. The junior has thrown for 30 touchdowns and greater than 3,000 yards on the campaign. Tiger receivers Damonte Coxie and Antonio Gibson have accounted for greater than 1,400 of those yards and 15 of the trips to the end zone.

Cincinnati’s Desmond Ridder has proven equally capable, and offers a bit more of a dual-threat dimension. The sophomore has connected on greater than 56 percent of his throws for over 1,800 yards and 17 scores, but has also thrown eight picks. His ability to limit mistakes will be key against an extremely active Memphis defense. Tight end Josiah Deguara has been a consistent target for Ridder, snaring 30 tosses for 424 yards and seven touchdowns on the season.

The sides’ run games are nearly equally competent, with perfectly-named Memphis freshman Kenneth Gainwell second among American rushers at 1,294 yards and 12 touchdowns. Cincinnati’s Michael Warren II stands just one end zone trip behind Gainwell, though he has rushed for fewer yards (939). Warren has tallied greater than 100 yards in three of the last four contests, while SMU and Houston limited Gainwell’s output under the century mark before a 128-yard effort against South Florida.

Everything is on the table for the heavily-favored Tigers, with the possibility of a rematch and a Group of Five bowl berth looming. Be honest, though — would you object to two games between these teams in two weeks?

What a story this game will offer. After Austin Peay was rescued from the depths of one win over 46 games by then-coach Will Healy, Healy has now taken his Charlotte team to bowl eligibility in his first year in the Queen City, and Austin Peay heads to the playoffs as the OVC champs. Mark Hudspeth claimed the Coach of the Year crown in the Ohio Valley, and he features several multi-talented players.

Kentel Williams and JaVaughn Craig have created quite the rushing tandem for the Govs, going for greater than 1,400 yards and 17 touchdowns. Craig has also proven quite the capable passer, connecting on greater than 56 percent of his throws for 22 touchdowns and over 2,500 yards through the air. DeAngelo Wilson has snagged 68 throws for 1,246 yards and 12 scores, with Baniko Harley recording 43 grabs for over 700 yards and six scores. On defense, Jack McDonald and Juantarius Bryant have snapped the 90-tackle mark, with McDonald recording 8.5 tackles for loss.

That offensive proclivity will be heavily tested against a Furman defense that surrenders fewer than 19 points per contest. In a tremendously weird stat, the Paladins surrender a notably high opposing completion percentage (67.1 percent), but allow just 159 passing yards per game. On offense, running back Devin Wynn has galloped for nearly 1,200 yards this year and made 14 trips to the paint. He runs behind a masterfully-skilled offensive line, which serves to protect both the backs and quarterback tandem Darren Grainger (1,203 yards, 10 TD) and Hamp Sisson. Thomas Gordon is the only Paladin receiver with over 20 catches, tallying 752 yards on 47 grabs with five scores.

The winner advances to play fourth-seeded Sacramento State in the next round, and this should be a great one.

And with that, 14 weeks of our lives have zipped by. This seems to be the case every year, but the speed at which it happens just keeps increasing. This also brings to a close my eighth year at this site.

As you celebrate Thanksgiving this week with family and friends, find 30 seconds or a minute that allow you to sneak away. Think about all that has happened to you in the last eight years. People have been born. People have died. You may have moved, have suffered great joy (or — and let’s hope not — grief), and who knows what else. We get caught up in all that goes on around us, and we get worse every day at taking inventory. My hope for you is that you can do just that over the break.

This has been, quite frankly, one of the worst years I’ve ever experienced. I won’t go into why, because no one cares, but I say that to say this.

If you have struggled this year — for whatever reason — you’re not alone. As much as it may seem so at times, you are not the only one going through challenges. If you are struggling, help is all around. Seek out your friends, your church, or the assistance of a professional. If someone you know and/or love is struggling, be that source of solace for them. Sports fandom doesn’t matter. Political views don’t matter. This is a really hard time of the year for many, and you never know whose day — or life — you may save.

Okay, enough preaching. As always, thank you all for your support of this site and this feature. It’s always fun to “talk ball” with all of you every week, and here’s to hoping you’ve enjoyed the changes to both the site and the feature as they have evolved. Your feedback is always welcome, whether it’s here, on Twitter, or whatever.

Safe travels to you all, and may you all enjoy the blessings of fellowship and love this season.

See you next decade.

TRIVIA ANSWER:  I asked earlier:  What was the first game we covered in this feature in 2012?

Miami (FL) vs. Notre Dame at Soldier Field was the first game we covered, and was our game of the week in Week 6 of 2012.

Miami was 4-1 at the time, and got buried by Notre Dame, 41-3. The Hurricanes would end up losing three of four (including that game) and finish the season 7-5. The Irish played for the BCS national title, and got drilled, 42-14, by Alabama.

Very true and very important to know that when you’re struggling, you’re not alone. As I saw on the side of a bus billboard once, “Everyone is going through something.”

Keep up the great work!