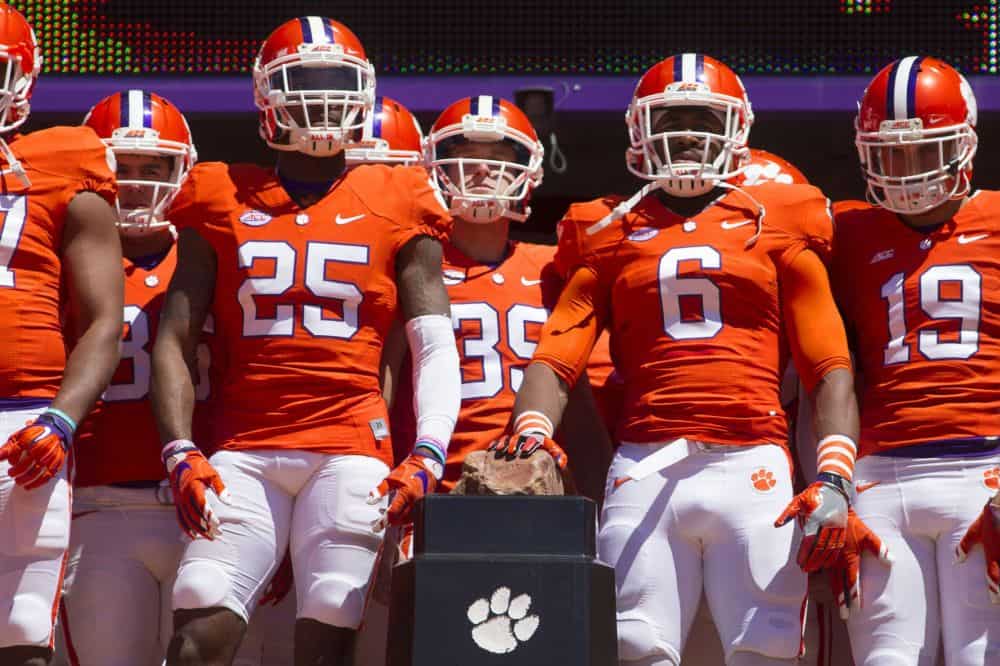 All eyes will be on Clemson Saturday night as Louisville visits. (Joshua S. Kelly-USA TODAY Sports)

How in the world is it already Week 5? Before we know it, we’ll be gathered around the table at Thanksgiving, then watching a ton of inconsequential bowl games. For now, though, we’ve got a great slate of games to break down this week. I’m also wondering if we should make one of our games each week the non-P5 game of the week, especially after the reaction we had to Georgia Southern-Western Michigan. If you love — or hate — that idea, let me know.

In the immortal words of Ziggy Marley, “if you don’t know your past, you won’t know your future,” so let’s look back at last week’s games from this space.

Test your prognostication skills by picking this week’s games for bragging rights and…well, nothing else…at this link!

Let’s see what this week has in store…right after trivia!

Trivia, Week 5 (answer at the end of the column): Who was the actual commander-in-chief the first time Navy and Air Force played as part of the pursuit of the Commander-In-Chief’s Trophy?

Print that, tweet that, whatever: A 1-2 start in the ACC would be tough for the Jackets to overcome, and the rumblings to replace Paul Johnson would only grow louder.

Print that, tweet that, whatever: Wisconsin is a double-digit ‘dog (for entertainment purposes only), and a win here would be their most impressive to date.

Print that, tweet that, whatever: State could stand to take a 3-1 record into a national TV date with Notre Dame. A win would gain some believers for Wake.

Print that, tweet that, whatever: Navy last won its first four games in consecutive seasons over 35 years ago. Repeating the feat will be quite the challenge.

Note from Brian: This letter was shared by FootballScoop Thursday afternoon. Should there be any remaining question about the gravity of this game, this will help dispel it.

Print that, tweet that, whatever: Georgia’s only home game this season came against FCS Nicholls — which they almost lost. Can the home crowd will them to a W?

Print that, tweet that, whatever: It happens rarely — if ever — that Clemson is an underdog in Death Valley. This will be the case Saturday. How will the Tigers respond?

Trivia answer: I asked earlier: Who was the actual commander-in-chief the first time Navy and Air Force played as part of the pursuit of the Commander-In-Chief’s Trophy?

Richard Nixon was the commander-in-chief when Navy defeated Air Force, 21-17, on October 21, 1972. He would win reelection just a couple of weeks later, on November 7.

You are such a homer for college football. There ain’t one minor league baseball or MLB prediction. That’s why I like MLB.com better than your website newspaper. Enough. Great read, though. Love the show. Ima hang up and listen.

Dude, do you realize the FB in “FBSchedules” stands for football?