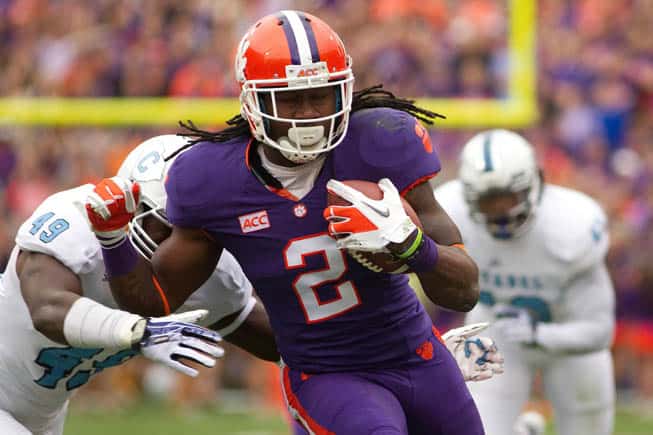 We’re finally here. It’s the final day of 2013, and the Atlantic Coast Conference is just a bit over halfway through with their bowl slate. The conference is 3-3 over its first six bowl games, and a number of intriguing games still await us.

Three of the four remaining non-national title games feature matchups between teams who have never before played each other. The fourth game is a rematch of one of the msot storied games in recent college football history. Finally, of course, the conference will play for a national title on January 6th. That game will be covered in a future version of Clear Your Schedule.

We’ll visit Shreveport, El Paso, Atlanta and Miami in our Keyword Search feature, but before we start our trip, here’s our trivia question!

2013 ACC Bowls (Part 1) Trivia (answer at the end of the article): The only time Ohio State and Clemson have ever met on the football field was the final game of Buckeye coach Woody Hayes’ career. Which bowl game featured this matchup, and why did it end Hayes’ career?

Since the BCS is ending, here’s a bonus note!

Trivia answer: I asked earlier: The only time Ohio State and Clemson have ever met on the football field was the final game of Buckeye coach Woody Hayes’ career. Which bowl game featured this matchup, and why did it end Hayes’ career?

The 1978 Gator Bowl ended in a 17-15 Clemson victory. Hayes punched Clemson defensive lineman Charlie Bauman on the Ohio State sideline after he intercepted an Art Schlichter pass. That incident, and the fight that ensued, resulted in Hayes’ firing at Ohio State. This was the final game he coached.

While all of these games will be won or lost in the trenches,the Clemson Ohio St game .will have the air full of flying footballs.I see this game as a slugfest with a high score,while the other games will be ball control and defense being the difference makers.At any rate,there are some potentially good games on tap,and you did a magnificent job of detailing what to expect.

ACC looks pretty bad so far this bowl season. The 2 Big East schools and UNC came to play but Va Tech, Maryland, Miami and BC were dumpster fires. Good thing Louisville is joining up next year. Miss State destroys the C-USA Champ while the Terps get whipped by the runner up. Maybe Duke will do something.