CFB teams playing the most ranked opponents in 2017 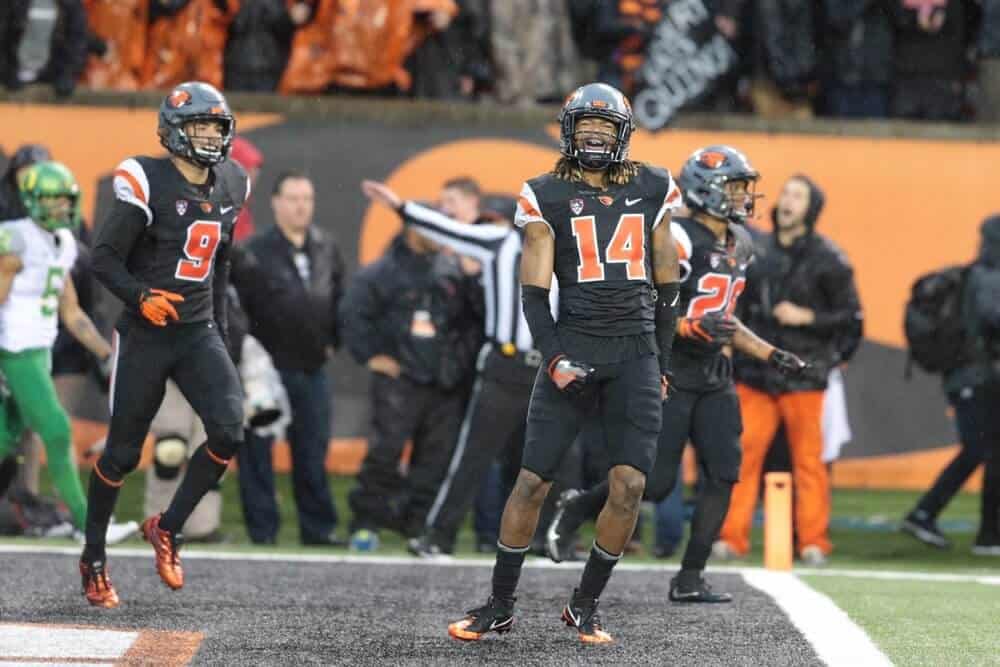 Oregon State has one of the most challenging FBS schedules in 2017. (Scott Olmos-USA TODAY Sports)

Coming into 2016, Notre Dame was ranked No. 10 in the preseason AP poll. Speed forward eight months, and the Irish aren’t even mentioned in the early Top 25 projections by ESPN, the Sporting News or CBS Sports.

It speaks to the cyclical nature of college football, where frequent personnel turnover is triggered by factors like graduation and the NFL Draft. Nothing ever lasts forever.

It also means that identifying difficult schedules isn’t as easy as pinpointing opponents that did well last season or even those who’ve enjoyed a long run of success. It’s all about this year.

The teams listed below are scheduled to play the most teams listed in ESPN’s Post-signing day Way-Too-Early 2017 Top 25. Though lots will change between now and game time, these programs have a steep climb ahead.

With five potential ranked opponents, Cal is one of four Pac-12 schools to get overserved on quality competition.

Not only do the Golden Bears automatically get (7) Washington, (21) Washington State and (15) Stanford from their own North division, they drew (3) USC and (19) Colorado from the South. It means that they’re set to play every single Pac-12 team mentioned in the early Top 25.

No Big Ten team is slated to play more ranked foes than the Terrapins in 2017. The only members that come close are Indiana and Rutgers, both with four such opponents.

Not only does Maryland have to face the terrible trio from its own East division (Ohio State, Michigan and Penn State), it drew (12) Wisconsin (the only ranked team from the West) and scheduled (23) Texas out of conference. If that weren’t enough, three of the five toughest games will come on the road.

Just like fellow Pac-12 North member Cal, Oregon State drew the Trojans and Buffs from the South, meaning its set to play ALL the ranked teams in the league this season.

The only ACC team with five potential ranked opponents, Syracuse’s schedule goes way beyond “not favorable.”

As an ACC Atlantic member, the Orange automatically get (6) Clemson, (2) Florida State and (18) Louisville. If that weren’t bad enough, they drew the (16) Hurricanes from the Coastal division and have to visit (9) LSU in non-conference play, the back end of a home-and-home series that began in 2015.

Syracuse’s three Top Ten opponents give it the most of any program in the FBS.

The reverse of Cal and Oregon State’s plight, Utah managed to draw all three ranked teams from the Pac-12 North to go along with the two it already has to play from the South. On top of that, the Utes get the Top Ten squads on the road.

As far as timing goes, that’s not great, either. Stanford and USC are back-to-back in Weeks 6 and 7, and the season finishes with Washington State, Washington and Colorado.

The final Pac-12 school on our list, Washington State not only drew the Trojans and Buffaloes from the South division, they picked up Boise State in non-conference play.

The only upside for the Cougars is that they get all the tough stuff at home, with the exception of the grand finale at Washington.

The Entire BIG 12 (minus K-State and Oklahoma State)

The lack of divisions in the conference mean that those teams not ranked will be facing all five of the schools that did get the nod. Baylor, Iowa State, Kansas, TCU and Texas Tech all fall into that category.

Beyond that, (8) Oklahoma, (23) Texas and (22) West Virginia each play the other four ranked Big 12 teams and a Top 25 school from another conference. The Sooners are at (4) Ohio State, the Longhorns are at (3) USC and the Mountaineers meet (25) Virginia Tech in Landover, Md. in the opener.

Colorado State is one of three non-Power schools that will face three potentially ranked teams in 2017.

(24) Boise State and (19) Colorado are regular fixtures on the Rams’ yearly slate. The Broncos are co-members of the MWC Mountain division and the Buffs are an annual rivalry game.

That leaves a visit to the top-ranked Crimson Tide, who CSU played as recently as 2013.

Like Colorado State, two of the three ranked opponents on ECU’s schedule are regulars. USF is a fellow member of the American East division and Virginia Tech has been on its slate every year since 2007, minus 2012 .

Unlike Colorado State, Fresno State hails from the MWC West, meaning it drew (24) Boise State as a cross-division opponent. Add in road trips to two Top Ten teams that both won their Power conference crowns in 2017, and it’s beyond tough.

Like East Carolina, the Bulldogs will also need to be ready early. After opening against FCS Incarnate Word, they’ll visit the Crimson Tide and Huskies consecutively in Weeks 2 and 3.