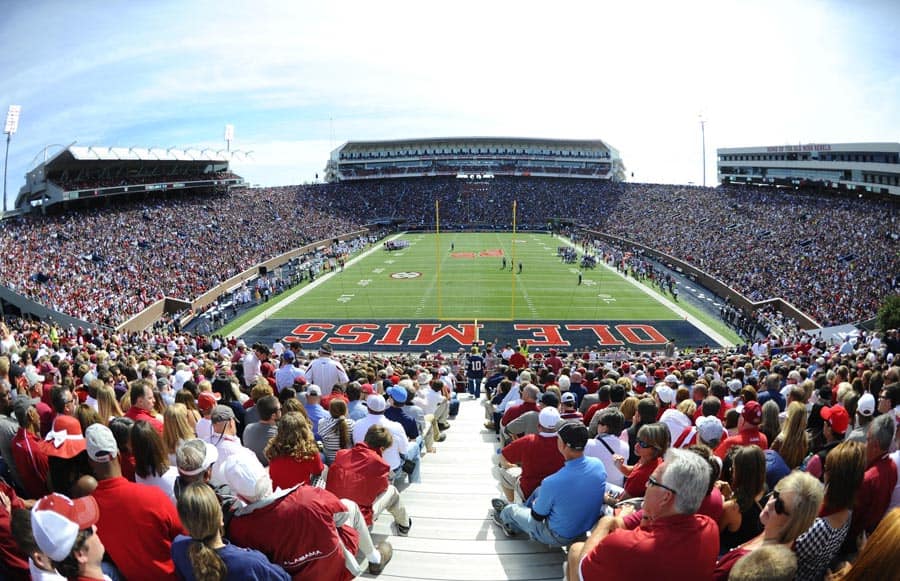 The California Golden Bears and the Ole Miss Rebels have scheduled a home-and-home football series for 2017 and 2019, the two schools announced today.

The 2017 game will be the first meeting between the two schools. It will also mark the first time Ole Miss has faced an opponent from the Pac-12.

To make room for the Ole Miss series, Cal had to push back their previously announced 2019-20 series against the Auburn Tigers.

Why can’t the University of Washington schedule teams like Mississippi, TCU and Auburn? At the same time they have Idaho twice, Easten Washington, North Dakota, Sacramento State twice, Portland State,etc. 11 FCS games in 8 years and 4 games against power 5 schools with Rutgers being two of those. Only Michigan in 2020 and 2021 has any appeal.

Ole MIss & Cal are starting to put some nice looking OOC future schedules together. We will see a lot more PAC-12 & SEC collide during regular season.

Cal’s OOC schedule is pretty good. Ole Miss’ is getting better, but it’s still pretty weak. To get respect when you play 8 conference games, you need to play a tougher OOC schedule (at least 2 Power 5 teams). Thanks!!!

One thing about Ole Miss and Miss State is that I’m guessing they’ll have more trouble getting top P5 teams to go there. They don’t have the prestige of the traditional SEC bluebloods and I don’t think they’re in a hotbed for recruiting (I’m open to being corrected). I know Ole Miss got Texas a couple of years ago but I don’t know how much incentive an Ohio State or USC would have to take a road trip into Starkville or Oxford. They may have to take what they can or play more neutral-site games.

They also have an uphill climb in the SEC as it is, without having to deal with a major OOC foe as well.

You nailed it! Ole Miss & Miss St are a good 8-4 or 9-3 team at best each year or there at the bottom of the SEC with a 3-9 record. Last year these schools had great teams but being in the SEC West they ran into a buzz-saw. Ole Miss & Miss St normally do schedule smaller teams in order to have more wins & make a bowl, in which is better for the conference the school, recruiting & pay. These teams are not that attractive at all when it comes to playing a USC or The Ohio St but if the Mississippi schools keep up these winning ways then they will be but I doubt that will happen due to all the other power houses in the SEC. I luv this match-up cause it gives you PAC-12 vs SEC with two teams that are really never all that hot.

LOL.. I love how you still are spouting the hype of the SEC West…The proved just how overrated they were in their bowl games..Bama beat easily, Ole miss abd Miss St taken behind the wood shed. LSU losing to lowly Notre Dame. Ole Miss and Miss St played garbage OOC guaranteeing 4 wins.

You guys are out of your mind! Ole Miss has to play in division conference games against Bama, LSU, Auburn, Ark, T A&M and the likes of cross division teams like Tennessee, Florida and Georgia. That Western Division SEC Conference is THE juggernaut of ncaa football. They WIPED OSU off the field in the Sugar Bowl and would most likely have been in the National Championship game if Arkansas’ BS fluke play hadn’t gone their way. Rebels had the 4th highest strength of schedule by end of season. Very hard for ANY team in the SEC West to not have a couple of losses.

I like how California is scheduling. Future schedules have either 2 PA or 1 PA plus an upper tier G5 school. The 3rd OCC is against the FCS, but one weaker game as a tune-up is fine.

“It will also mark the first time Ole Miss has faced an opponent from the Pac-12.”

Absolutely pathetic. Get out of your comfort zone, Ole Miss!

This announcement would indicate that they are working on getting out of their comfort zone.

You do know that the SEC and PAC12 haven’t met in a bowl game in I don’t know how long either. For some odd reason. Other than the national championship. There is much more controlling who these teams play than some want to realize. I may be wrong but the universities don’t have much say in which bowl they go to. And yes it is pathetic they haven’t played a PAC12 team. I want to see better OOC games and at the same time I want to see better bowls. At least then, at the end of regular season, we can compare equally ranked teams and truly figure out who the best conference is. But the bowl matchups this past year were absolutely pathetic. Somewhat better than in the past but still a long ways to go. The people with the “say” don’t give two sh*ts about quality matchups in the bowls, all they care about is money. What has been controlling many of the OOC scheduling in the past. But hey can you blame them.

FBS teams should be allowed to play FCS team, as the FCS teams actually benefit from it, but it shouldn’t count towards bowl eligibility, just played as an exhibition game. That means that teams that tend to finish with 5-6 wins each season would stray from scheduling FCS teams, or they would plan an FCS team as a 13th game.

NO FCS Games. They are worthless and btw dangerous to FCS athletes. Schools with 85 scholarships are playing a school with 63. Even in FBS if you said some teams get 62 and others got 85 scholarships it would create a large disparity, that’s why sanctions like what happened to Penn State and Miami killed their programs when scholarships were reduced. With FCS it’s even worse b/c they are dealing with lesser and smaller athletes in general and fewer scholarships. The games are worthless and all conferences should do what the b10 is doing in phasing them out or be like USC, UCLA, and ND who have never played an FCS school. FCS games are also bad for fans. They pay the same money to see a good game or a worthless FCS game. Schools have many reason to get rid of then as mentioned and another is they are becoming more expensive as schools are wanting 800K for them and the games often don’t sell out .

In 2014, the UW paid GeorgiaState $900,000 to come to Seattle. There were over 5,000 unsold seats @ $ 30 dollars less than for P% games and at least 15,000 no shows for a Saturday afternoon game in 80 degree weather. The Huskies played listless and trailed at the half 14-0 before winning 42-14. The players were unmotivated to play a lesser team, The gate was reduced by a few hundred thousand, the fans were totally uninterested-I could not give my tickets away.

If any one can fin an OOC schedule weaker than that, please advise.

First, FCS games should only be allowed in the spring and at the end of August as pre-season exhibition games – that do not count toward the win-loss record.

Then, all P5 teams should be required to play at least 2 P5 OOC, with at least one on the road or at a neutral site.

The Selection Committee could better compare and rank teams if the P5 conferences play each other more often. The fans would benefit tremendously too.

So, instead of each playing Idaho in a payday home game, USC and Auburn would play EACH OTHER (see 2015).

Instead of playing Georgia Southern, West Virginia and Georgia play EACH OTHER (see 2015, again).

Instead of playing Troy, NC State and Wisconsin or Mississippi St. play EACH OTHER (see 2015).

Agree with no FCS games and I hope other conferences will phase them out like the B10 is doing. They are bad in so many ways. The 2 P5 OOC would be nice but will not happen. The only way you could do it is setting up a system like they do with the ACC/B10 challenge or SEC/B12 challenge in bball. All the schools of the conferences would have to coordinate to specify certain dates for all the games like week 2 or 4 are ACC vs B10 and 3 ad 5 are 12 vs b12 or whatever. Without that level of coordination it would be impossible to assure everybody gets 2 games that fit the right dates. The top programs, if you look at future schedules, are going to 2 P5’s most years and when they don’t they have 2 p5’s they are going with a P5 and a top level mid major.

The first thing I would mandate before 2 p5’s OOC would be everyone play a 9 game conf schedule and 1 P5 at a non neutral site. The ACC and SEC don’t play 9 games which is logistically asinine with 14 teams Those two conferences also play the most FCS games. In the SEC every team plays one and most years the ACC is the same, I think it was 13 of 14 ACC teams played a FCS last year and the SEC was 14 of 14. Next year both are 14 for 14 while the B10 has 7 and the other conferences have 8

The second mandate would be end FCS games.

I think those 2 things would make a huge difference so teams would be playing 10 of 12’s guaranteed vs P5’s. The top programs are already scheduling 2 P5’s. Ending FCS games would also give some of the better midmajors better scheduling opportunities. Some of that is already happening b/c with the B10 phasing out FCS games they are also have more future home and home series with mid majors as they are also reducing their pure pay games. Part of the b10 strategy by their commissioner was playing each other more which was done by 9 games, playing better OOC games and financially reducing pay games which on average in 2013 cost almost 1 mil per game.

WelL it looks like the Sec is starting to schedule home and home series. Nice to see. Need to see more quality matchups like these. Legit. Great for college football.