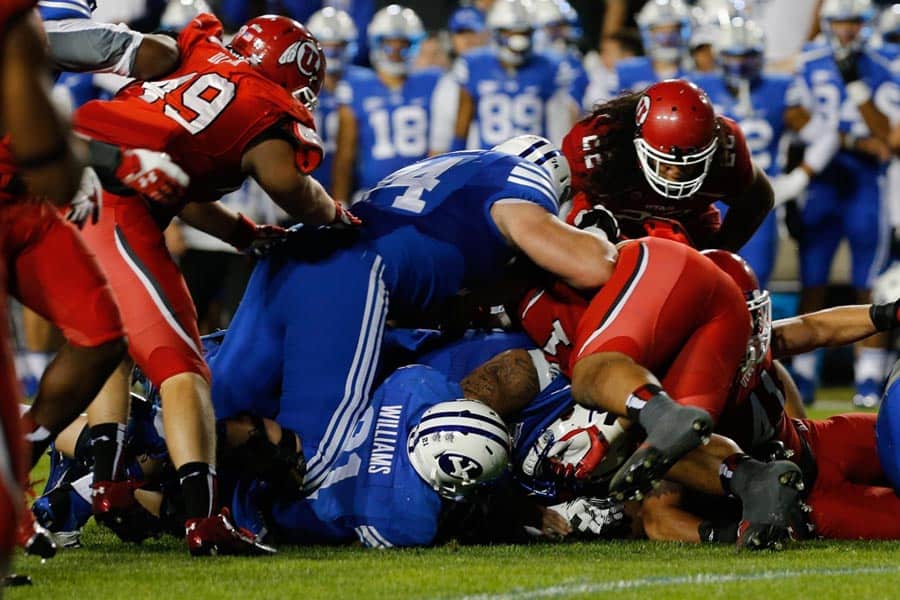 The BYU Cougars and the Utah Utes have agreed to extend their future football series through 2020, The Salt Lake Tribune has reported.

The report followed a statement from Utah athletic director Dr. Chris Hill on Tuesday on the status of the BYU-Utah rivalry:

“I was very disappointed at the inflammatory statements made today by a local radio host toward me personally in regards to the Utah-BYU football rivalry and I feel it is important to shed some light on the topic.

“The message I have received loud and clear from Utah season ticket holders is that they support our decision to take a two-year hiatus from the BYU rivalry in order to play Michigan at our place.

“The Michigan game is attracting more national publicity than we’ve had for maybe any non-conference home game in our history. There is a tremendous excitement surrounding the game from our fans. We anticipate it will also draw the largest TV audience we’ve had for a game televised from Rice-Eccles Stadium.

“Neither Tom nor I like to announce things until we have signed contracts in hand, but the circumstances today, when my personal integrity was attacked, led me to believe it is important to let people in the state know our future plans.”

“We’re playing it, like we’re saying, ’19 and ’20 I think are the first games of the year, ” Hill said. “It’s important for us to be able to play in the beginning of the year. That’s really in a lot of ways not very debatable because of whenever our league schedule is.”

BYU and Utah are scheduled to meet next season on Sept. 10 in Salt Lake City in the second game of a home-and-home series that began in 2013 in Provo.

If you’ll recall, the “Holy War” series between BYU and Utah was not played in 2014 and will not take place in 2015 either. That’s due to Utah joining the Pac-12 and then scheduling a home-and-home series with Michigan for 2014-15.

Back in February, Tom Holmoe offered his thoughts on the future of the series at his semiannual roundtable discussion.

Utah leads the overall against BYU 54-31-4. The Utes beat the Cougars 20-13 in their last meeting in 2013 to extend their winning streak to four straight.

The Utes are currently scheduled to open the 2019 season at home vs. Idaho State. In order to play BYU that weekend, they will have to postpone or cancel that game. Utah is also slated to host Northern Illinois on Sept. 7.

BYU, which has opening weekend available both seasons, now has nine games scheduled in 2019 and eight games in 2020.

BYU has announced that the series is official:

Great news. Glad to see these two schools are not letting the changing landscape of college football impact their historic rivalry.

Not going to happen anytime soon. Texas wants no part of a&M. Also, texas has built an OOC many years in the future with quality p5 OOC, thus they have no need to get A&M, UT has 4 years playing 2 p5’s OOC with a 9 game conf schedule and no FCS games. A&M meanwhile has many openings and never schedules 2 p5’s OOC even though they have 8 game conf schedule.

You are way wrong, friend. It’s the Ags that want no part of the Horns. They are yesterdays news in the State of Texas. Aggies OWN recruiting in Texas.

Glad to see it coming back. This game is why I became a college football fan and it has been missed. It is an emotional drain and is hard on both teams to have at the beginning of the year. If Stanford and USC can schedule Notre Dame toward the end of the year, not sure why Utah can’t get the Pac 12 to allow them to schedule their in state rival in November. Why force the Colorado rivalry?? I completely see where Dr Hill is coming from though. A 9 game Pac 12 schedule is crazy enough. It is obvious that BYU, as an independent, needs this game more than Utah does.

While it helps Pac-12 scheduling to have a team playing BYU during Thanksgiving week, it doesn’t have to be Utah vs. BYU.

BYU needs it more in October or November. For civility reasons, I wish the game would just go away.

Good to see this get worked out.

Educated guess from a reader after communicating with Tom Holmoe.

Here are the two sources I used, folks:

2. Tom Holmoe’s e-mails to Chris Hill list the first date above booked with an opponent and the latter four open dates:

3. The only date previously thought to be open now not mentioned as open by TH was 10/12