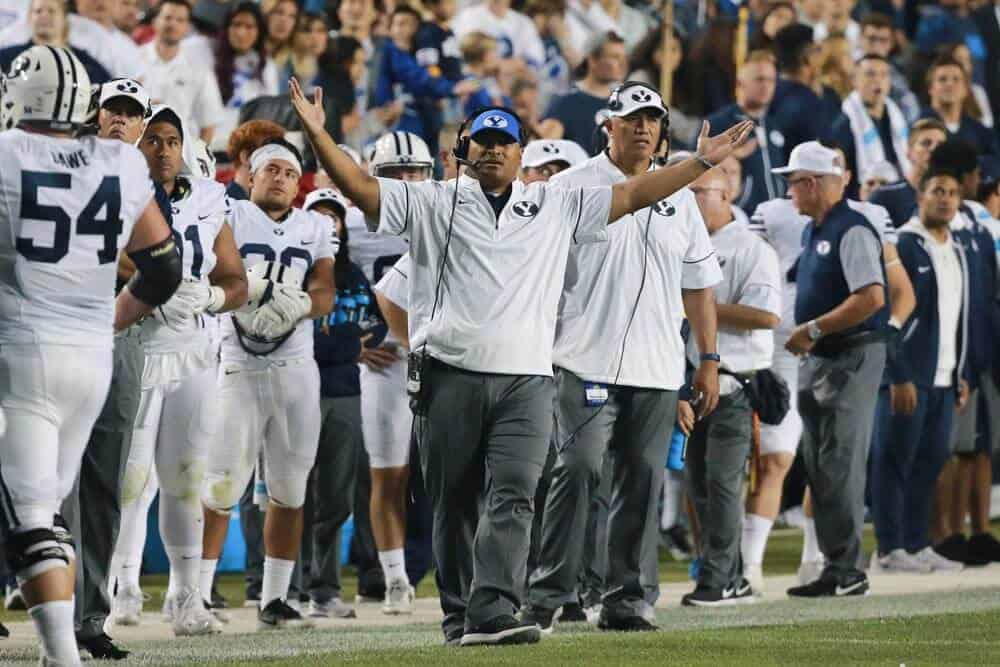 The BYU Cougars and the San Diego State Aztecs have scheduled a home-and-home football series for 2019 and 2020, both schools announced on Thursday.

In the first game of the series, BYU will travel to face San Diego State on Nov. 30, 2019. The Cougars will then host the Aztecs at LaVell Edwards Stadium in Provo on Nov. 14, 2020.

BYU and San Diego have met 36 times on the gridiron and the Cougars currently lead the series 28-7-1. In their last meeting in the 2012 Poinsettia Bowl, BYU defeated San Diego State 23-6.

The Cougars, an FBS Independent, now have nine games announced for the 2019 season and ten games for the 2020 season.

The addition of BYU completes San Diego State’s non-conference schedule in 2019. The Aztecs are also scheduled to host Weber State (Aug. 31) and travel to UCLA (Sept. 7) and Eastern Michigan (Sept. 28).

The BYU Cougars also announced today that they have added the McNeese State Cowboys to their 2018 football schedule. BYU will host McNeese State in Provo on either Sept. 22 or Oct. 13. The exact date for the game will be announced later.

Good series. BYU has been able to remain decent as an FBS Independent, and as long as Rocky Long stays at San Diego State, they’ll be formidable as well.

Rocky Long is the coach at SDSU? That’s great, he hates BYU, will add to the matchup.

BTW, this is good stuff. BYU got its most pressing date filled (only season-closing vacancy before 2024 and no P5 school will fill it), with a just-below-P5 quality opponent…that is a rival..that is a warm-weather closer…with a November return game.

And good for SDSU, they fill whatever stadium this is played in.

I was hoping they would make it a 4 game series. But @SDSU to end the 2019 season is very nice for BYU.

While I had been hoping BYU would add a sixth P5 opponent in 2018 and fifth then sixth P5 opponent in 2019, my thought is that the flexible date on the McNeese State game may be an indicator BYU will next address its excess of home game needs 2018-2020 with a 2 for 1 with NMSU. This uncertain date announcement is unusual for BYU but matches what NMSU has lined up with Louisiana in 2018. BYU could go H-A-H 2018-2020 with NMSU and help out a new independent as Notre Dame (and NMSU/WAC) did BYU and BYU did UMass. I am thinking NMSU would fill one of the two dates, BYU would host McNeese that day and NMSU would visit Provo on the other day. This would leave the Cougars with one home date in 2019 to fill once FCS games are scheduled for 2019 and 2021. The target would likely be a home P5 game in 2019 (fifth P5 that year) with return road game in 2021. BYU is fairly set for P5 opponents 2020 on, 6 or more annually are likely plus Boise State, Utah State, an FCS opponent and the best of the G5s.