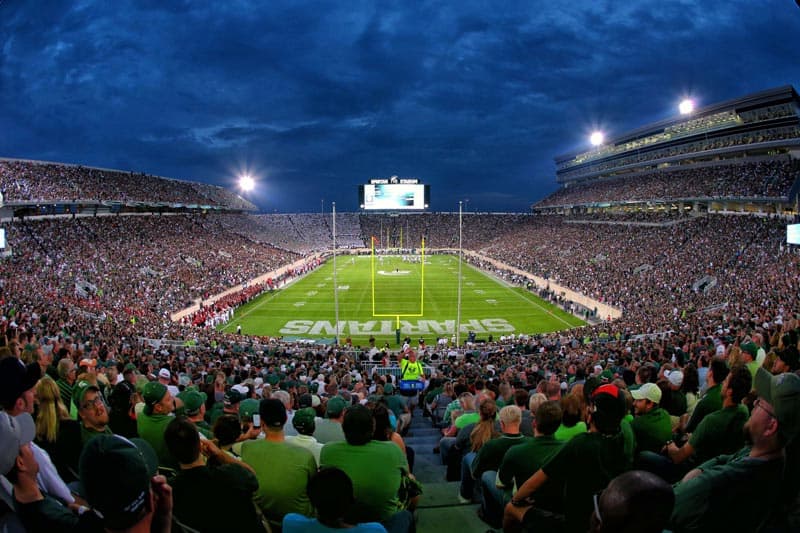 The BYU Cougars and the Michigan State Spartans have scheduled a home-and-home football series for 2016 and 2020, both schools announced today.

Michigan State will host the first game of the series at Spartan Stadium in East Lansing on Oct 8, 2016. BYU will host the second and final game at LaVell Edwards Stadium in Provo, Utah on Sept. 12, 2020.

The 2016 contest will be the first ever meeting between the two schools on the gridiron.

“We continue to be aggressive and innovative in our approach to non-conference scheduling, as we seek to bring the top programs in college football to our state as well as provide our student-athletes with an opportunity to compete nationally at the highest level,” Michigan State Athletics Director Mark Hollis said. “The BYU series also provides MSU Alums in the Rockies and West with an opportunity to see the Spartans play against a national program.”

Michigan State was previously scheduled to host Wisconsin on Oct. 8, 2016. That game has been moved to Sept. 24, a date that both teams previously shared as an off week.

The Spartans also moved a previously scheduled game with Furman from Sept. 24 to the season-opener on Sept. 3. Michigan State’s open date in 2016 will now fall on Sept. 10, which is the week before a visit to Notre Dame.

In addition, previously scheduled games against Eastern Michigan at home on Sept. 10, 2016 and on the road on Sept 12, 2020 have been mutually canceled.

BYU also had to shift a couple of games to make way for the series with the Michigan State Spartans. An Oct. 8, 2016 home game vs. UMass is now up in the air, although it will likely just shift dates that season.

“I’m excited about this series with one of the top programs in the Big Ten,” said BYU Director of Athletics Tom Holmoe. “We haven’t played many games in the Great Lakes region and I like scheduling opponents like Michigan State that we’ve never played in football. It’s exciting for Cougar Nation and it’s a great experience for our coaches and players.”

So excited for this game! MSU will be a fantastic October game. We need one interesting home game for ’16 and it’ll make for an even better schedule. BYU’s 2020 looks crazy! Shaping up to be their best yet.

It takes a while to build a strong independent schedule and things look to be coming together in many seasons. I loved the 2013 home schedule, the 2014 was the same as if BYU had stayed in the MWC, 2015 is great…. although most big names games are on the road… but, by 2020 the home/away mix is awesome.

It’s much easier to understand when you put it that way!

I think the worm has turned and BYU will have an easier time putting schedules, with Power 5 conference teams, together. BYU fans have no interest in the FCS, nor MWC teams other than Boise, (sorry Uggies, a win every 9 years/ave doesn’t make the cut). We saw just how much playoff seeding is related to strength of schedule ie. How many wins vs top 25, vs top 50, etc. BYU is the only non-Power 5 that Power 5 teams can afford to play home and home. Home games on ESPN along with a sellout for a quality opponant, away games stacked with BYU a fans local and traveling. No other non-Power 5 team could bring 7,500 to Notre Dame, then 15,000 to Georgia Tech a week or so later.

Speak for yourself, I enjoy the Utah State game.

The open date that works for both Umass and BYU is October 15th, one week later. It would reduce the hole in UMass’ schedule, and fill one of the home games BYU needs. So I would bet dollars to doughnuts that is when that game gets played. BYU needs 6 home games and are short 3, so no way does this get dropped.

My hunch is that UNLV road game will be pushed to 2017, and BYU will look for one more FBS school to host and bring in an FCS school to Provo to finish the schedule. BYU is short home games.

Wow 5 power schools, albeit 4 on the road. When you add in strong road games against Boise State and Cincinnati, BYU easily has the strongest schedule of a non-P5 school. And yet they probably need to schedule 7 power conference schools to get the ACC and SEC to possibly consider them a power school. Its a catch-22 situation. But they are putting themselves in a strong position to accept a P5 invitation down the road. An they have clauses in contracts, such as the Missouri one, which state they can back out of the contract free if they join a P5 conference.

BYU isn’t a school worthy of a home-and-home, this should have been a 1 game payoff to play in EL and that’s it.

As a Sparty fan, these two games are going to be awesome. And playing in Provo will be a treat for the Mean green players.

Shep, I am genuinely interested to know if you are saying this as a MSU/Big 10 fan or just an anti-BYU fan. I’d like to hear what real MSU fans are thinking about this matchup.

Shep, my good man. You sound like more a schlep! BYU just swept Texas (41-7 in Austin this year). Would you prefer more MAC opponents come crawling to you. Most MSU fans will welcome this on the schedule and enjoy a trip out west to play under the Wasatch mountains unless you prefer to play most of your games in the middle of a corn field. Have a good day-and don’t sweat the small stuff. Also, you don’t want to sound like the holier than thou SEC which other than few teams refuses to leave their home base for a non league game.

BYU has established that they are garbage on the road versus Power 5 teams. Do you really want to talk about Texas? Texas is going through one of the lowest points of its history. Until BYU gets a decent coach and some real athletes, they are going to continue to lose big games. The story of BYU’s independence has been consistent: Win a game or two against some lower level Power 5 teams, inexplicably lose to bottom-feeder from a Power 5, and rattle off a bunch of wins against terrible MWC and FCS schools. Bronco is good for getting you to 8-5 in the Independent climate. Good job! You are scheduling bigger opponents, but your team is still a joke.

As a Pac 12 and USC fan, you are crazy. BYU is one of the most respectable teams in the country. They will benefit from being independent. Also, with their future schedule, I think they will be a team to watch out for.

BYU was undefeated against P5 schools this year, with the Texas and Cal games taking place on the road.

@Dave – what’s your point about BYU defeating Texas this year? Doesn’t mean much. You bring up the MAC but they were a whole lot more competitive than BYU was the second half of the year. There is no benefit from MSU traveling to Provo, they’d be better off playing a home-and-home with a school in fertile recruiting ground such as Florida, Texas, and California as opposed to Utah. Considering they have deals with ASU and Miami FL, it would’ve made much more sense to have it with Stanford or Texas Tech. BYU is not different than Memphis or UNLV.

You are wrong, sir. BYU won a nation championship in the 80s, is known as QB U, and has an extremely large following. As such, this game will play on primetime. It’s great for Sparty.

FYI BYU has gone 13-12 vs power 5 teams since 2008, including beating Texas 2 out 3, 2-0 vs. Georgia Tech, 2-1 vs Washington, beating UCLA 59-0 in 2008, winning @ Mississippi, beating Oregon St 2 out of 3. Maybe Michigan isn’t worthy of a home & home with Michigan St. after their pathetic season with all of their resources. To compare BYU to UNLV is like saying Indiana or Purdue is the equal of Michigan State.

Everyone needs to freakin’ calm down. It’s true, BYU would not be at the top of any P5 conferences if they were actually in one based on the last 3-4 years of independence. However, there is no doubt that teams like BYU or Boise St, add to a non conference schedule more than a UNLV would. Any UNLV fan would admit that.

Hopefully, BYU can win more recruiting battles than they have been and build a team thats worthy of these types of schedules in the coming years.

You provide absolutely zero context to these items. UCLA went 4-8 in 2008, Ole Miss went 2-10 when they lost to BYU, etc. Like a typical Mo-mo, you spin your wheels without going anywhere when it comes to logic. Stop sounding like you have impressive wins with those items, because you don’t you schmuck.

This is for “Maverick” maybe 20 years ago byu was qb u which I still doubt. MSU is qb U! Who has more NFL starting qbs than the Spartans right now?! Shhhhhhhh

As a Catholic, (not a Notre Dame fan ) I find your crude reference to members of the LDS community (Mo-mo) a bit sad. Perhaps, overtime you will be able to overcome such prejudices. BYU would be a good mid level addition to the PAC12, better than WSU, California and Colorado and on par with Oregon State. No one said that they were the end all and be all but compared with many members of P5 conferences, such as Washington St, Colorado, California, Indiana , Purdue, Illinois, Kansas,Wake Forest, Kentucky, Virginia, North Carolina to name, they would be a consistently stronger member of any P5 conference.

Pretty sure if you don’t run up out of this thread my strong swinging fists are going to land upside your head.

You’ll just have to show me the directions to your Mom’s basement haven’t explored the rest of the house…it’s usually straight to her room.

Toodles. And heed my words.

My magical underwear will protect me, words heeded!!!!!

What a dick. BYU is a bad football program cause they have mormons playing for them? Magic underwear? Real classy and creative. I would think you would want to talk about things you know. But football clearly isn’t one of them. Maybe you could teach us all how to cut out eye holes in our white sheets. Freaking bigot.

hey shep is your last name is it …… howard ?