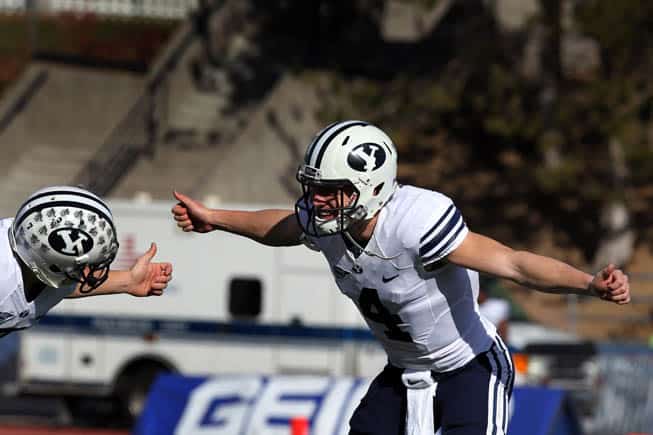 Back in 2011, the BYU Cougars and the Southern Miss Golden Eagles signed an agreement for a home-and-home football series to be played in Provo in 2014 and in Hattiesburg in 2015.

But in November, Southern Miss announced their 2014 non-conference schedule, minus the BYU game, and stated that they will “push that game back to a later date.”

That later date is now 2016. Per a copy of an addendum to the contract, Southern Miss will travel to face BYU in Provo on November 19, 2016.

With the addition of Southern Miss, BYU now has seven games scheduled for the 2016 season. The Cougars open against Arizona at University of Phoenix Stadium in Glendale and also face West Virginia at FedEx Field in Landover, MD.

Road games for BYU in 2016 include Utah, Boise State, and Cincinnati. The only other home game currently known for 2016 is the season finale against Utah State.

Southern Miss currently only has one other game scheduled for 2016 — a trip to LSU. However, the game was slated for Sept. 3 and LSU has since scheduled a game against Wisconsin at Lambeau Field on the same date.

The Golden Eagles were previously set to host Western Kentucky in the second game of a home-and-home series, but the Hilltoppers are joining Conference USA this season.

So far – Holmoe has 2 home games and 5 Road games scheduled for 2016. This looks to be a disaster. I am a Huge Y fan, but this should be very troubling.

Do not panic. The 2016 season is three seasons from now and there are only 5 games needed by then. The 2013 and 2014 schedules were not finished until less than a year before the first kickoff. And, the 2016 schedule is already pretty decent – Utah, West Virginia, Arizona, Boise St., Cincinnati. My hunch is that we will see a couple more MWC/AAC level opponents at home, one FCS at home, and two more P5-level matchups – one home, one away.

*New games – for illustration purposes only

I have to agree with Bill. I love the away schedule in 2016. It’s adding up to be a great season but the trend has been, the closer we get, the harder it is to get decent home games. We’ll end up getting a few more mid majors, and an FCS. Don’t get me wrong, I am not complaining about the overall schedule. Tom does a great job, independence just makes it hard to get a lot of fun home games for local fans. I still hopeful that home games with big schools will get easier as time goes on. I do, however, like Utah St. as the last game of the year. I’d like to see that continue instead of having it the first Friday of October each year.

The problem with Independence will always be an imbalanced schedule. Each year BYU plays big names on major networks. The problem is that they rarely play those games in Provo. 2013 was great with Texas GT Utah and Boise at home. Best home schedule so far but they also played Notre Dame and Wisconsin on the road.

In 2014 the biggest home games are USU Houston and Virginia. that slate is hardly anything to get excited about. The biggest 2014 road games are Texas UCF and Boise.

So far in 2015 the home games are Boise Cincy ECU UCONN and Fresno St. The big road games are Michigan and Nebraska.

Each year the road schedule is more impressive than the home schedule. If BYU could bring one big time name to Provo each year than I would be a bigger fan of being Indy. Their are big names scheduled to come to Provo in the future such as Wisconsin and USC but those games are in 2019 or later.

I would be surprised if BYU is still Independent in 2019. If the Big 12 or Pac 12 never call then BYU might join the AAC or maybe even go back to the MW.

I believe the So Miss away game will be moved to a later year. The 2014 game at LES was moved to 2015 and now BYU has a BYE that date. so appaerntly was moved by So Miss. So So Miss will now do the favor of allowing BYU to move the 2015 game in So Miss, maybe to 2017. That allows Holmoe to put in its place a home game, which would be a sixth home game (right now there are 7 away games and 5 home games scheduled for 2015)..