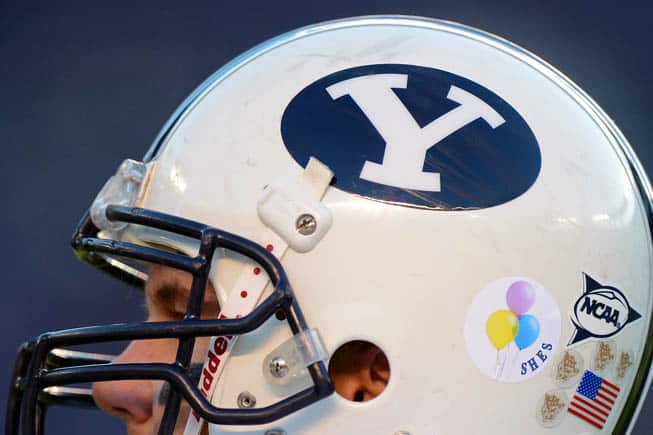 The BYU Cougars and the Fresno State Bulldogs have scheduled a home-and-home football series for 2015 and 2017, both schools announced today.

BYU will host the first game of the series at LaVell Edwards Stadium in Provo, Utah on Nov. 21, 2015. In the second and final game, the Cougars will travel to face the Bulldogs at Bulldog Stadium in Fresno, California on Nov. 4, 2017.

“This is a great regional matchup for our football program,” said BYU director of athletics Tom Holmoe. “It’s been more than a decade since we played Fresno State. If tradition holds true, fans will be in for a high-scoring game featuring two former Western Athletic Conference foes.”

The two schools played the majority of their games against each other when both were members of the WAC from 1992 through 1999. BYU is now an FBS Independent while Fresno State is a member of the Mountain West Conference.

The addition of Fresno State gives BYU nine games on their 2015 football schedule. The Cougars are also slated to host Boise State, Cincinnati, and Connecticut and travel to Nebraska, Michigan, Southern Miss, UNLV, and Utah State.

In 2017, BYU has games scheduled at home against Wisconsin and Boise State and on the road at East Carolina.

Fresno State has now tentatively completed their 2015 non-conference schedule, unless they take advantage of the Hawaii Exemption. The Bulldogs are scheduled to open the season against Abilene Christian and later host Utah. Road games include Ole Miss and now BYU.

The game against BYU in 2017 is the first announced non-conference match-up for Fresno State.

Sucks for the Cougs. BYU would get the same respect and more wins playing Hawaii.
Fresno is going to win one of these and EITHER ruin a great season, OR make a mediocre season horrible for BYU.

Oh yeah.
Maybe not. Probably not.
I’m scared though.

Hawaii has been so bad the last year or two, that unless they have some major improvement they are on a much lower level than Fresno St. is.

Honestly, this will be a fun match up. Going to California later in the year is nice, and the two teams have history from the WAC days. I’m still holding out hope that BYU and Air Force can make it happen as well…as for that, we will have to wait and see.

At least they didn’t have to give another two for one. Air force isn’t going to happen. They are disgusted with BYU.

This series intrigues me.