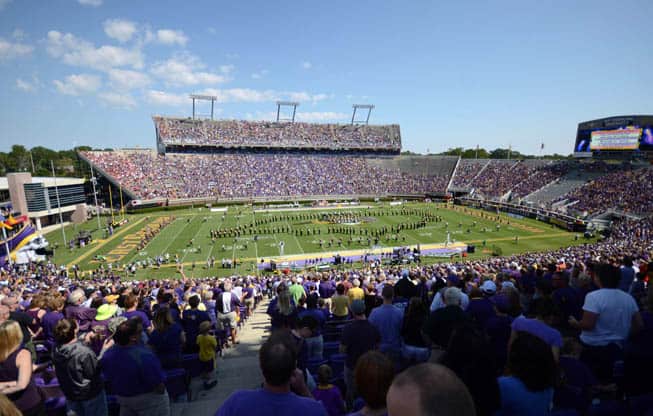 Back in 2012, BYU and East Carolina announced a home-and-home football series that was to be played in Greenville, North Carolina in 2017 and Provo, Utah in 2018.

Today we learned that there has been a date change for the match-up in Provo. In an East Carolina release this morning announcing a future football game at Florida, the ECU-BYU game in Provo was listed for the 2015 season rather than 2018.

We followed up with East Carolina and they confirmed that the 2018 game at Provo has in fact been moved to 2015. The ECU athletics department also provided us with the tentative dates for both games. BYU is currently set to host East Carolina on Oct. 10, 2015 and travel to face the Pirates on Oct. 21, 2017.

The Southern Miss game in 2015 has been rumored to be off, but we have yet to obtain official confirmation of that. BYU was slated to visit USM in 2014, but it was removed from both schedules.

In 2017, the Cougars have eight games scheduled and need four more.

I am surprised; when BYU first announced they were going Indy, I expected a lot of MAC, CUSA and SBC level teams. 2015 looks like a very decent schedule.

The Cougars seem to be scheduling a hybrid MWC-AAC schedule with some high-profile Big Ten opponents and then two or three PAC 12 (in about 3 or 4 years) – but without road trips to Laramie. I’m not complaining!

We should probably worry about a bowl game for 2014 first!

This sites database is not synchronized…

I believe the latter is correct.

Wow. ECU’s scheduled series with South Carolina and West Virginia have changed a lot over the years. Both schools owe trips to Greenville.