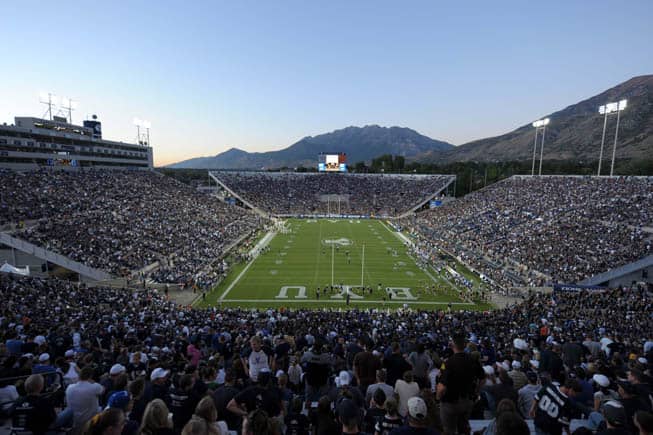 The BYU Cougars and the California Golden Bears have scheduled a home-and-home football series for 2014 and 2017, both schools have announced.

BYU will travel to face Cal at California Memorial Stadium in Berkeley on Nov. 29, 2014. The Cougars will then host the Golden Bears at LaVell Edwards Stadium in Provo on Sept. 16, 2017.

“This is obviously a unique series for me,” said BYU director of athletics Tom Holmoe who coached football at Cal from 1996-2001. “Cal is a world-class academic institution with a historic football tradition. Playing in the newly remodeled Memorial Stadium will be a treat for our team and the Cougar faithful who attend the Berkeley matchup, and having the Golden Bears play at LaVell Edwards Stadium will be a great game for our home fans.”

BYU and Cal have played three times with the last meeting coming in the 2005 Las Vegas Bowl. The Cougars lead the series 2-1.

The addition of Cal in 2017 gives the BYU Cougars six games, four at home and two on the road. BYU is also slated to host Boise State, San Jose State, and Wisconsin and travel to East Carolina and Fresno State.

California has completed their non-conference schedule for the 2014 season. The Golden Bears open the season at Northwestern on Aug. 30 and then host Sacramento State on Sept. 6.

The game at BYU in 2017 is the first announced non-conference game for Cal for that season.

Cal and USC can schedule BYU in November.
Utah. You’re running out of excuses.
Lets do it every year.

If Utah AD Chris Hill is to be beleived, it just might happen in 2018.

I haven’t seen anything official yet, but it looks like the Pac-12 is changing their policy to allow non-conference games on Thanksgiving weekend, but only if it’s a home game for the Pac-12 team. I think they’re looking to fill out their schedule on the Pac-12 network. Could mean BYU and Utah would play odd-numbered years in Provo in September and even-numbered years in Salt Lake in November.

I think this is only to alleviate the scheduling issues when Stanford and USC play Notre Dame late in the season. But they may rotate it around.

I really don’t want Utah on BYU’s schedule. I’m tired of all the garbage that goes on in the rivalry. If Utah can’t be BYU’s last game of the regular season, then don’t schedule them.

I guess USC, Stanford and Cal will be rotating BYU in years Notre Dame is playing at USC or Stanford.

Counting the Stanford rumors, that makes 5 out of 7 FBS teams in California that have scheduled BYU in the last several weeks. BYU (rightly so) wants to play in California and against California teams every season.

We need to play more Florida and Texas schools as well.

Actually I was getting 2017 and 2014 confused. If Southern Miss doesn’t drop the game, this completes BYU’s 2014 schedule with no FCS school on it.

I don’t love the Southern Miss game anyways.
I’d like to see a Purdue type match-up instead.

I am wondering if the USM game will fall through. With the Nebraska/Michigan Road Games, USC 2 for 1s and neutral site games, the Cougars really need the FCS or Idaho 1 for none annually to balance the games outside of Provo. Turning USM into a 2 for none per USM’s request would help in this regard.

Just checked with Southern Miss, and their SID says he is unaware of any changes to the BYU series. Doesn’t mean it couldn’t change later though.

Isn’t it ironic that the 2 Pac-12 teams that pushed the hardest to block BYU from joining the conference (Cal and Stanford) are the same 2 that have stepped up to help them fill their future November schedules? What’s the deal?

I guess the Stanford series is still a rumor, but still . . . Also, I think Utah is still dragging their feet because they want a 2 for 1 like some other schools are getting now that they’re in a “big-boy” conference. Does anyone know, is that something Utah has been asking for? It wouldn’t surprise me from them anyway.

USC and Stanford were told to find some friends to play Thanksgiving for the five 14 weeks seasons 2020-2024 or else no Notre Dame closers for their counterpart. This opened the door for earlier years and BYU has lined up for Thanksgiving:

2019 could be @ Washington State. They are already on the schedule – just no date yet.

Happy to see Cal on the schedule.

I’d also like to see a BYU/Iowa, BYU/Boston College and BYU/Miami series. I haven’t looked through schedules, but maybe they can make room.

Now why would byu and washington state play on rivalry week? That makes no sense whatsoever

Because Stanford plays Notre Dame, leaving Cal without a game whatsoever. But 2019 is not a big concern as it is a 15 week season, as 2/7 of seasons are.