Brian Kelly: “We want to get an SEC team on our schedule” 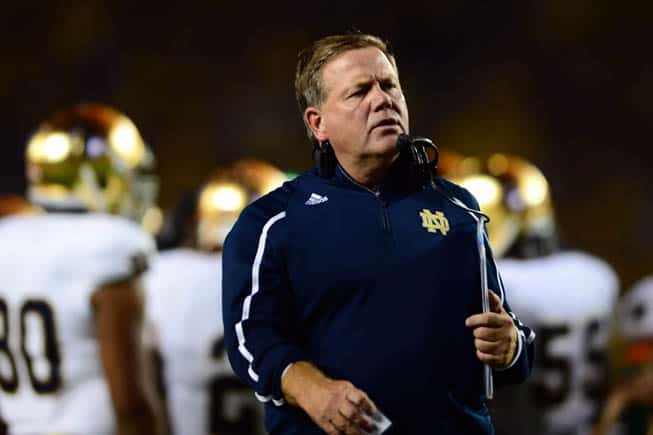 Last year, out of nowhere Notre Dame head coach Brian Kelly said that the Georgia Bulldogs would be a natural matchup for the Fighting Irish.

Then last month, it was reported by CBS Sports that Notre Dame and Georgia were in discussions to schedule a future home-and-home football series, possibly for 2018 and 2019.

A possible Georgia-Notre Dame matchup was again referenced this week when Brian Kelly was featured on Bruce Feldman’s podcast.

“I know the mention was Georgia. You hear a lot of rumors of that. Is that something that seems like it would be just too hard to squeeze in or is that something you’ll push for?” Feldman asked.

“No I don’t think that that’s something that’s too hard. I think one of our wishes, Jack (Swarbrick, Notre Dame AD) and I, is that we want to get an SEC team on our schedule,” Kelly said. “The discussions have been to include an SEC opponent, and we want one that we feel makes sense, that has a very good geographical draw for us in the SEC.

“If you look around we’re in Florida already with Florida State, so I think you can probably figure out pretty easily what SEC (team) would be the best draw for us as it relates to recruiting and an alumni base.”

Kelly is, of course, speaking about the state of Georgia and it’s fertile recruiting base. A look at the 247Sports composite recruiting rankings shows that Georgia has the fourth highest number of top recruits, trailing only Texas, Florida, and California.

Notre Dame already plays opponents in California (Stanford and USC) and has a future home-and-home series scheduled with Texas. The Irish have also played in Texas as part of their Shamrock Series.

So it makes sense for the Irish to want to play in Georgia, and the Georgia Bulldogs are the only SEC team in the state. The next time Georgia and Notre Dame face off on the gridiron, it will be only their second meeting following the 1981 Sugar Bowl.

“I would imagine a lot of fans would get excited about those traditional Georgia-Notre Dame helmets matching up against each other at some point” Feldman said.

“I would think,” Brian Kelly said while chuckling.

Sounds like a great idea. The Irish will face Georgia Tech from time to time within their ACC opponents. A series with the Bulldogs will assure the Irish get a strong presence felt within the state. Hope it works out.

Of course they’d be glad to end up playing an SEC team. They’ll end up with Kentucky or Vanderbilt or (Ole {Miss)issippi State} though, knowing them.

ND has already tried a home and home with Ole Miss. Game 1 was in Jackson, MS on a very hot Saturday afternoon in week two of the season. Ole Miss scored late on a pass and won 20-13. Joe Montana did not play in the game but numerous ND studs were on the field including All-Americans Ross Browner, Ken McAfee and others. Ole Miss lost to Southern Miss the next day and only won 5 games in 1977. ND went on to an 11-1 season and won the 1977 National Championship. The return game was in 1985 in South Bend and ND had there way with Ole Miss 37-14.

Of course fans would love it…

WTF is your problem? Them, the SEC, isn’t eager to play Notre Dame. I don’t give a hot damn about Alabama, so I don’t know where your comment is coming from. Alabama only womped ND because it was the end of a very long season… play that game early in the year, and it would have turned out a lot different, and Alabama could have lost. I remember at least back to the days when Alabama’s OOC games were often Penn State and A&M and other major schools… these days, those folks schedules are embarrassing. Georgia State? Ouch.

How many academy teams does Notre Shame play again?

Georgia will never agree to this…..it might mean they will lose a critical home game against Wofford or VMI…..

Georgia’s the one SEC team that routinely plays major out of conference opponents in addition to the in-state, OOC rival Georgia Tech. Georgia is the one who had a home and home tentatively planned with Ohio State and the Buckeyes opted out. Georgia is the one who tried to get a home and home with Michigan but the Blue AD wanted 2 for 1. The new AD has been more reluctant to follow up with that type of scheduling, and next year’s schedule is a disgrace. But I also believe he is feeling the heat about that and is working to schedule games with the history and tradition of the Irish. I hope it happens.

I am just hoping UGA is watching Auburn’s OCC schedule this year and next….you know what I am talking about. It’s time to renew our bitter rivalry…

Notre Dame played Tulane in Tulane’ SEC days and Knute Rockne was on the Panama Limited bound for New Orleans to be hired by Tulane when Notre Dame preempted Tulane by a day.

Georgia bailed on a home & home with Oregon as did Kansas State. Why are SEC schools so reluctant to come to the west coast to play OCC games? The weather is milder, there are no bugs and you cannot beat the natural beauty. It is just as from Athens to Eugene or Seattle as it is the other way around. Playing Georgia State, Troy and Elon is an insult to your fan base.

So when you say the Bulldogs are “the one SEC team that routinely plays major out of conference opponents”… you mean a “nearby” opponent with nickname Yellowjackets, and on occasion another nearby team. Indeed every other year the Bulldogs OOC schedule has two power conference programs, Georgia’s remaining OOC games are home games against SunBelt and FCS programs. Clearly the Bulldogs are scared to travel far. South Bend would be an extremely long distance for Georgia to travel.

Most SEC programs, besides LSU and Tennessee do not travel far. Texas A&M wanted to cancel the home-and-home series with Oregon. But after getting shafted by Georgia, Ducks held firm and would not allow the series be cancelled. So the Aggies sucked it up and scheduled a home-and-home with UCLA. And Arkansas scheduled one with Michigan.

But Alabama, Auburn continue to avoid traveling far. Neutral field games in Arlington and Atlanta is about as far as they go. Georgia, So Carolina, Florida and Louisville have a built-in excuse to not travel far with nearby OOC rivalry games.

Actually Oregon bailed on the series. UGA did not object.

Quit drinking the dogwater koolaid…its the other way around.

At any rate who did Georgia decide to replace Oregon with in 2015 & 2016? A home game against a a SunBelt team and a TBA where I suspect not much travel is involved.

Oregon set up home-and-homes with both Michigan St and Nebraska.

Actually looks like it was mutual from a non-biased report: http://collegefootballtalk.nbcsports.com/2010/09/27/georgia-oregon-mutually-agree-to-cancel-future-series/

Not sure what the concern about distance traveled to play OOC games. UGA’s playing a home and home with Clemson – a better opponent than pretty much anybody in the Big 10. UF plays FSU every year – are you suggesting it would be more difficult for them if they played Michigan State or someone like that??

Alabama has the 95th toughest

Alabama always has a by-week prior to LSU. Sure, you claim that their schedule is so tough. Explain ND 103-56 schedule compared to Bama’s 50%

Alabama will have a great season only based on their weak schedule.

If you haven’t notice the SEC doesn’t have to travel far because we are so great in conference,all you other garbage conference colleges need to come to us and play real football if you want a challenge.

As in playing coastal Carolina who’ll ford or vmi?

Georgia pussed out of the Oregon home and home series. Oregon was kind enough to say it was “mutual” so Georgia could save face, which they shouldn’t have done. Now A and M cancels. Only SEC teams with a pair enough to play are Tennessee (and LSU at neutral sites). The rest of the SEC don’t even play a full conference schedule whereas the Pac 12 does. This should reflect in the playoff committees rankings as well. No more little sisters of the poor if you want to be in the playoff. Ninnies.