Breaking down Week 9 of the 2021 college football schedule 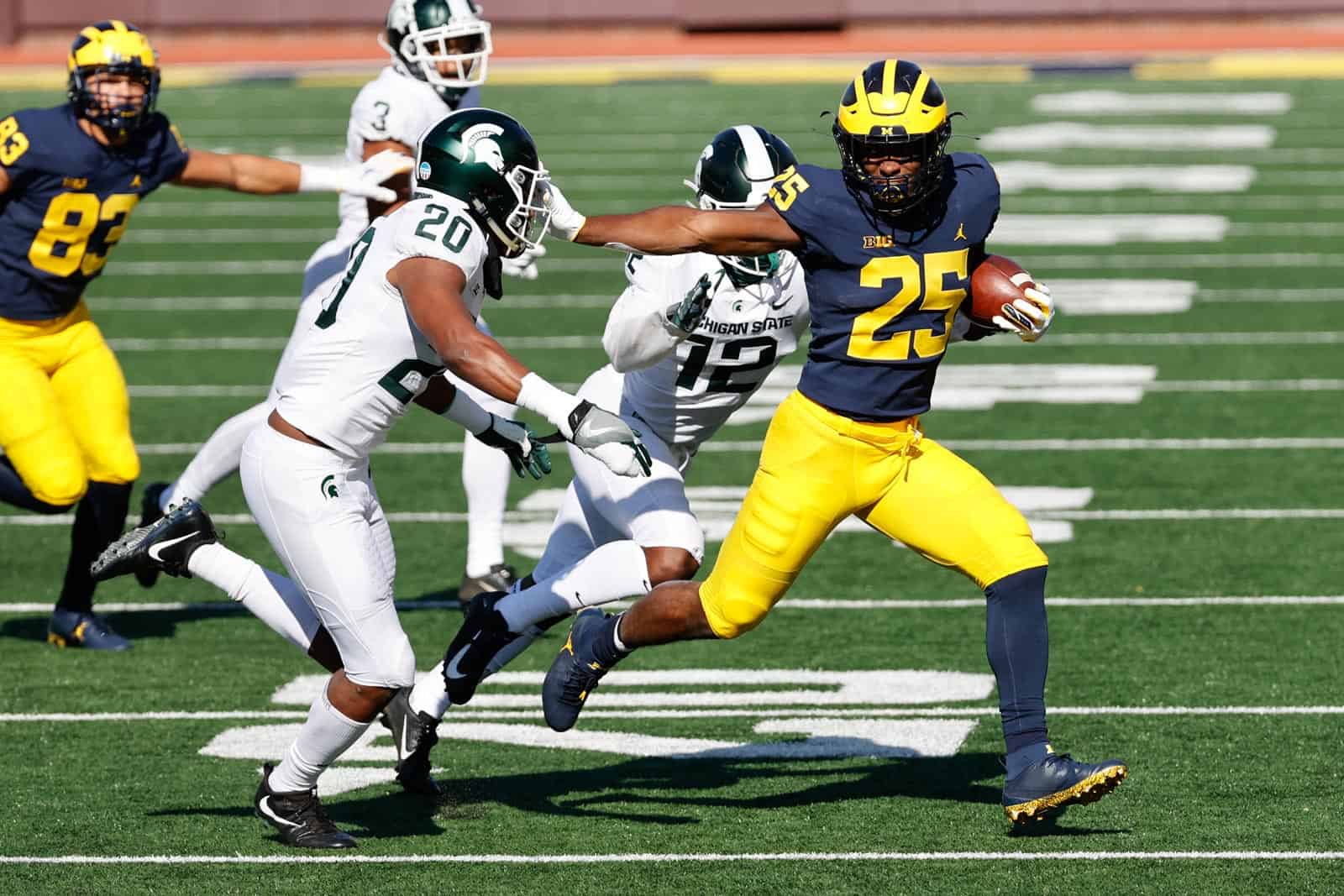 Week 9 of the 2021 college football schedule is everything Week 8 wasn’t. Where there were no ranked vs. ranked affairs last weekend, this Saturday there are three including an epic Top Ten matchup.

Of the nine-remaining undefeated FBS squads, only two – (6) Michigan and (8) Michigan State – will face a ranked opponent. But that doesn’t mean there isn’t an upset on the horizon as (1) Georgia will be tested against Florida (the Gators may be 4-3 but they’re still stacked with talent) and (19) SMU and (21) San Diego State are both playing in games with a one-point spread.

Most critically, Week 9 is all that stands between us and the release of the first College Football Playoff rankings on Tuesday, Nov. 2. It’s essential that all squads with a chance to make the CFP bracket score a win this week – in what is Week 1 of the real rankings – to ensure the best possible pole position.

In what may be the biggest mismatch in Week 9, tune in to this one to watch Nevada’s elite air attack (currently No. 3 in the nation) take on a UNLV defense ranked No. 124 vs. the pass. Where only two FBS teams have averaged more air yards than the Wolf Pack, only six have been more generous than the Rebels. Keep an eye on Nevada junior QB Carson Strong (#12), the No. 4 passer in America.

Did you know that the Longhorns’ defense is ranked No. 114 in the FBS and No. 8 in the Big 12 vs. the run? Cue up Baylor – quietly ranked No. 9 nationally and No. 1 in the conference in rushing offense – and things get interesting. The only other top ten rushing attack Texas has faced this season is Arkansas (currently No. 6 in yards per game), which hung up 333 yards and four scores on the Horns.

This is your opportunity to watch Pitt senior QB Kenny Pickett (#8) and the seventh-best passing attack in college football. Pickett is currently ranked No. 9 in the FBS in yards per game, No. 6 in passer rating and No. 4 in TD passes.

In what should be, at least on paper, the best strength vs. strength matchup of Week 9 it’s Florida’s No. 4 nationally ranked rushing attack – averaging a cool 254 yards per game – taking on a Georgia D ranked No. 2 in the FBS vs. the run, allowing a meager 63. The Bulldogs have given up a total of 225 rushing yards in their last four outings – all SEC games.

After Matt Wells’ release, Texas Tech will be led on the sidelines by interim head coach Sonny Cumbie. Cumbie played quarterback for the Red Raiders from 2000-04 and after a successful run as the OC at TCU from 2014-20, took the same job at Tech this season.

This is the first time since 2010 that both the Seminoles and Tigers are unranked coming into their annual clash. Clemson went 6-7 that year, the second in the Dabo Swinney era and the only losing record with him at the helm. Florida State – which won the game 16-13 – posted a 10-4 mark in what was the first of Jimbo Fisher’s seven seasons in Tallahassee.

While it’s no surprise that USC is ranked No. 13 in the FBS in pass offense, did you know that Arizona – which hasn’t won a game yet – is ranked No. 13, in the nation, vs. the pass? The Trojans are three-touchdown favorites meaning this pairing hardly has upset, nor intrigue, nor drama, written all over it but – what if?

Despite starting out the season with a combined 46 rushing yards in his first two appearances, Oklahoma State senior RB Jaylen Warren (#7) is the No. 11 back in college football, averaging 111 yards per game. It’s a number that ought to do nothing but rise vs. a Kansas D ranked No. 127 overall and dead last in the Big 12 against the run.

This week the Mustangs’ magical 7-0 run – powered by a passing attack ranked No. 10 in the FBS – will be severely tested against a Houston D ranked a lofty No. 12 in the entire nation – vs. the pass. Where SMU hung up 438 air yards and three scores on Tulane last week, the Cougars held pass-happy Texas Tech to a mere 231 passing yards in Week 1.

So, it’s late and the fair-weathered fans you’ve been watching with all day have gone to bed – what’s next? Tune into ESPN2 to see the second-best passing attack in the land (high-flying Virginia) take on a secondary that gave up 345 and 314 passing yards respectively to Arizona and Utah State. Plus, how about Bronco Mendenhall – who has been the head man at Virginia since 2016 – returning to BYU where he compiled a 99-43 record from 2005-15?

Though somewhat muted by a 4-3 start, Marshall is ranked a lofty No. 5 in the nation in pass offense. Cue up FIU – currently ranked No. 129 in the FBS in pass D – and the Thundering Herd could be a danger to the scoreboard. Where Marshall is averaging 353 air yards per game, the Panthers are allowing 307 – only one team in the entire FBS has been more generous. On the flip side, while FIU also boasts an elite air attack – No. 14 in the nation – Marshall’s D, unlike that of the Panthers, has been stellar vs. the pass, currently ranked No. 11 in the FBS. Keep an eye on Thundering Herd freshman QB Grant Wells (#8) – No. 5 in the nation in passing yards per game.

The Heartland, a bronze bull, wasn’t introduced until 2004 when the two schools decided to honor their then 110-year-old rivalry by offering a traveling prize. Why a bull? According to the Hawkeyes, it “symbolizes the kind of games that have been typical when the schools meet.” The Badgers have grabbed the bull by the horns nine times vs. Iowa’s six.

One of two FBS “can” trophies (both of which Fresno State plays for) the “Battle for the Old Oil Can” debuted in 2011 after a contest aimed at naming the rivalry and establishing a traveling trophy. The repurposed antique recounts “the discovery of an old oil can from Fresno (circa 1935) that was supposedly recovered during a San Diego State campus building project.” The Bulldogs have had the can in their garage five times vs. the Aztecs’ four.

Established in 2009 by the student governments of both schools, the Okefenokee is a 10-foot long oar, carved from a 1,000-year old cypress tree from the Okefenokee Swamp. Covering nearly 700-square miles, the swamp straddles the Florida-Georgia state line. The Bulldogs and Gators have paddled home with the Oar six times apiece.

First presented in 1953, the Paul Bunyan was donated by then Michigan governor Gerhard Mennen Williams to commemorate Michigan State’s inaugural season in the Big Ten. The trophy is a whopping nine-feet tall, featuring Bunyan standing with one foot on each side of the state, each school’s flag claiming its half. The Wolverines have earned 38 Bunyan’s vs. the Spartans’ 28. The 1958 and 1963 games both ended in ties.

This Saturday’s Virginia Tech and Georgia Tech game (Noon ET, ESPN 3) marks only the 22nd time in history that two of the four FBS “Tech” programs have clashed on the gridiron.

Apart from last year, the Hokies and Yellow Jackets have met every season since Virginia Tech joined the ACC in 2004. The only other action between the two came in Atlanta in 1990, a 6-3 win for Georgia Tech. The Hokies lead the series 10-7.

The Yellow Jackets and Red Raiders have met twice previously but not in 51 years and never in the regular season. The two first clashed in the 1965 Gator Bowl (a 31-21 win for Georgia Tech) and then most recently in the 1970 Sun Bowl (a 17-9 win for the Yellow Jackets).

The Red Raiders and Bulldogs met as recently as 2016, a 59-45 defensive battle in Lubbock that was a win for the home team. Before that, it was 88-years ago, in 1933, when the Bulldogs were again the visiting team, this time falling 40-10.

While the Hokies and Yellow Jackets will continue to meet annually for the foreseeable future as members of the ACC Coastal division, there are no other Tech vs. Tech matchups currently on the books.

Next Tuesday is the “real P ower F ive I nvitaional Rankings” on display.

I hope the AP sports writers popularity mixed with some merit Poll continues it’s own direction VS the Power Five Exclusivity mixed with national brand lobbying Poll the Committee will market to 1A Fans.

Coastal Carolina did their part VS Conference Foe TroyU. on Thursday. They’ll keep their ranking in the Top 25 for another Week.

If BYU wins VS UVA in The Bronco Bowl they’ll be chasing CCUChants similar to 2020 in the Top 25 Rankings.

If BYU loses to Cavs Saturday they’ll be invisible in the rankings Race VS CCU.