Breaking down Week 6 of the 2021 college football schedule 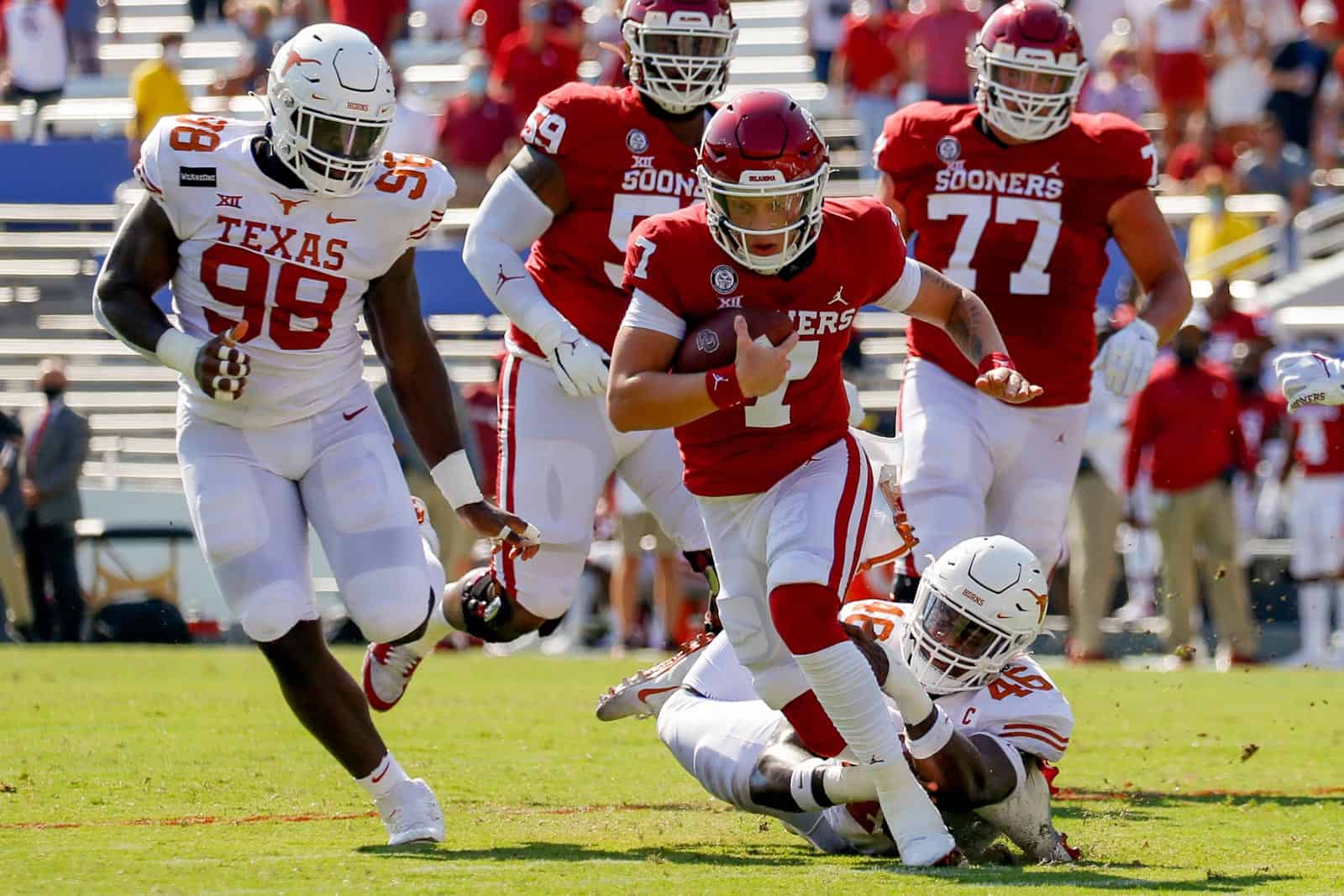 Of the 17 undefeated teams remaining in the FBS, six hold the No. 1 through No. 6 spots in the current AP. Of these, four are playing a ranked opponent this Saturday. Of the two with “easier” matchups, one – (1) Alabama – gets a worthy league foe (Texas A&M, which just dropped from the rankings) on the road.

Overall, it’s a season-low 51 total games with a season-high 28 clubs taking the week off.

THIS is why you bought the kegerator.

Arkansas State’s prolific passing attack is ranked No. 5 in the FBS, making for a real heavyweight battle against a Coastal Carolina D ranked No. 3 in the nation vs. the pass. But wait! There’s more. The Chanticleers’ high-powered ground game (ranked No. 6 in the FBS) vs. a Red Wolves’ defense ranked a dismal No. 129 vs. the run – only one team in the nation has allowed more rushing yards.

After rushing for 170 yards in the opening win over Louisiana and dropping to a season-low 138 ground yards in the loss at (13) Arkansas, Texas has averaged 345 rushing yards in its last three outings and is currently ranked No. 5 nationally in rushing offense. It sets up for a Battle Royale against Oklahoma, currently No. 7 in the FBS vs. the run, giving up, on average, 83.4 ground yards per game. The Sooners’ D is far and away the best the Longhorns have faced thus far. Check out Texas sophomore RB Bijan Robinson (#5), currently the No. 2 back in college football.

(1) Alabama (ranked No. 24 in the FBS in pass D) held Ole Miss to a season-low 213 air yards last Saturday. This week, the Rebels host Arkansas, which despite getting blanked by (2) Georgia last week, is the owner and operator of the No. 2 pass defense in all of America. Where Ole Miss is averaging 308 air yards per game, the Hogs are allowing a paltry 130.

Though the sexier option is on CBS, don’t sleep on this one which comes complete with two potential mismatches: (1). Boise State’s No. 18 ranked passing attack taking on a BYU defense that’s No. 98 vs. the pass – and – (2). Cougar sophomore RB Tyler Allgeier (#25) (currently ranked No. 9 in the nation in rushing yards per game) vs. a Bronco D ranked No. 108 in the FBS against the run.

After coming into 2021 ranked No. 10 in the preseason AP poll, North Carolina is 3-2. Despite the unmet expectations, the Tar Heels still have a high-powered passing attack, currently ranked No. 15 nationally and No. 3 in the ACC. It’s a concrete strength that might make UNC look like it’s righted the ship against a Florida State defense that’s No. 103 nationally and No. 12 in the ACC vs. the pass.

Though they’re 19-point favorites and ought to be out for revenge after getting smashed 62-24 by Tennessee last week, Missouri’s biggest weakness could be further exposed by – yes, I’m going to say it – North Texas. Where the Mean Green are a top rushing team (No. 1 in the C-USA and No. 26 overall), no team in the FBS has given up more ground yards this year than have the Tigers. While you’ve got to figure that the gap in talent between the two programs – with far different access to resources – will prevent an upset…this is why they play the game. It’s reality TV at its finest! Keep an eye on North Texas senior RB DeAndre Torrey (#3) – the No. 3 back in the FBS.

Where USC’s passing attack is the best in the Pac-12, Utah’s pass D is the third best in the league. It sets up for a solid strength vs. strength matchup for two teams – which after starting the season in the Top 25 and combining for a 5-4 mark thus far – desperately needing a Week 6 win to keep hope alive.

If you’re up late and want to add a splash of yardage to your final beverage of the evening, tune into this sleeper to watch New Mexico State’s defense (which gave up 382 and 352 passing yards respectively in back-to-back games vs. New Mexico and FCS South Carolina State) try and stop a Nevada offense averaging 331 air yards per game (No. 9 in the FBS).

Not only do the Gators have the best rushing attack in the SEC, their 292 yards per game earns them the No. 3 rank in the FBS. Only option-centric Army and Air Force have averaged more. Florida hung up 244 ground yards on (1) Alabama, a defense that on average has given up 111. It sets the stage for a rush-fest vs. Vanderbilt, the second-most-generous rushing defense in the SEC, ranked No. 112 nationally and allowing 203 ground yards per game. Look for Florida to bounce back in a big way vs. the Commodores.

First awarded in 2009, the Gansz Trophy honors Frank Gansz, a highly regarded, longtime special teams coach in college and the NFL. Gansz played at Navy from 1957-59, was an assistant coach there from 1969-72 and then was the special teams coach at SMU from 2008 until he passed away in 2009. Navy has won seven Gansz’s vs. SMU’s two.

Awarded to the annual winner of the Red River Showdown (a.k.a. the Red River Rivalry/Classic/Shootout), the Golden Hat dates to 1941 when the Texas State Fair presented it to the rivalry.  Originally called the “Bronze Hat,” it was upgraded to the gold standard in 1969. According to legend, it’s one of the few long-standing traveling awards that has never been stolen, lost, broken or vandalized. The Longhorns have worn the hat 40 times vs. the Sooners’ 38. The 1995, 1984 and 1976 games ended in ties.

A renewed tradition, the Battle for the Saddle was reignited in 2017. The original prize dates to 47-years ago, in 1961 (Tech’s second season in the Southwest Conference), when the Lubbock Avalanche Journal and the Fort Worth Star-Telegram combined forces and tagged the rivalry “The West Texas Championship of the Southwest Conference.” The original Saddle was in use until 1970 when it mysteriously disappeared after each school had won it five times. When TCU joined the Big 12 in 2012 there was a push to resurrect the award. The Horned Frogs have won the new Saddle three times vs. the Red Raiders’ once.

(9) Michigan’s visit to Nebraska this Saturday night marks only the third time in history that the Wolverines have played in Lincoln. Given that the first two trips resulted in a loss (23-9 in 2012) and a tie (6-6 in 1911) it’s also an opportunity for Michigan to score its first ever win at Nebraska.

Not surprisingly, it’s the only current Big Ten venue that the Wolverines have never won at.

The only other current Power 5 destinations that Michigan has visited previously but never scored a victory at are (8) Oregon and Utah. The Wolverines made the trek to Eugene just once, in 2003, when at No. 3 in the AP they fell to the No. 22 ranked Ducks 31-27. They’ve also visited Salt Lake City on only one occasion, in the 2015 season opener, a 24-17 loss to the Utes.

The reality is Michigan has only traveled to other Power 5 venues sporadically throughout its football history. The conference it’s visited the most frequently is the Pac-12, where it’s played roadies at eight out of the 12 current destinations. Other than their 0-1 records at Oregon and Utah, the Wolverines are 3-1 at Cal, 2-2 at Washington, 2-1 at Stanford, 2-1 at UCLA, 1-0 at Colorado and 1-0 at USC.

I especially enjoy the matches which haven’t been played very often.

Regarding those matchups outside a P5s Region, when they profess to be a national brand & nationally relevant but they don’t have to risk going outside their same ole lineup of In-Conference Midmajors, Doormats & Nonconference Patsies (whom they play approximately every 3-4 Years) allows for some fresh chatter in place of the yearly playback Loop. Examples, AL, GA, PA State, OK, OH State, OR, MI, MI State, ND, Auburn, FL, TX.