Breaking down Week 5 of the 2021 college football schedule 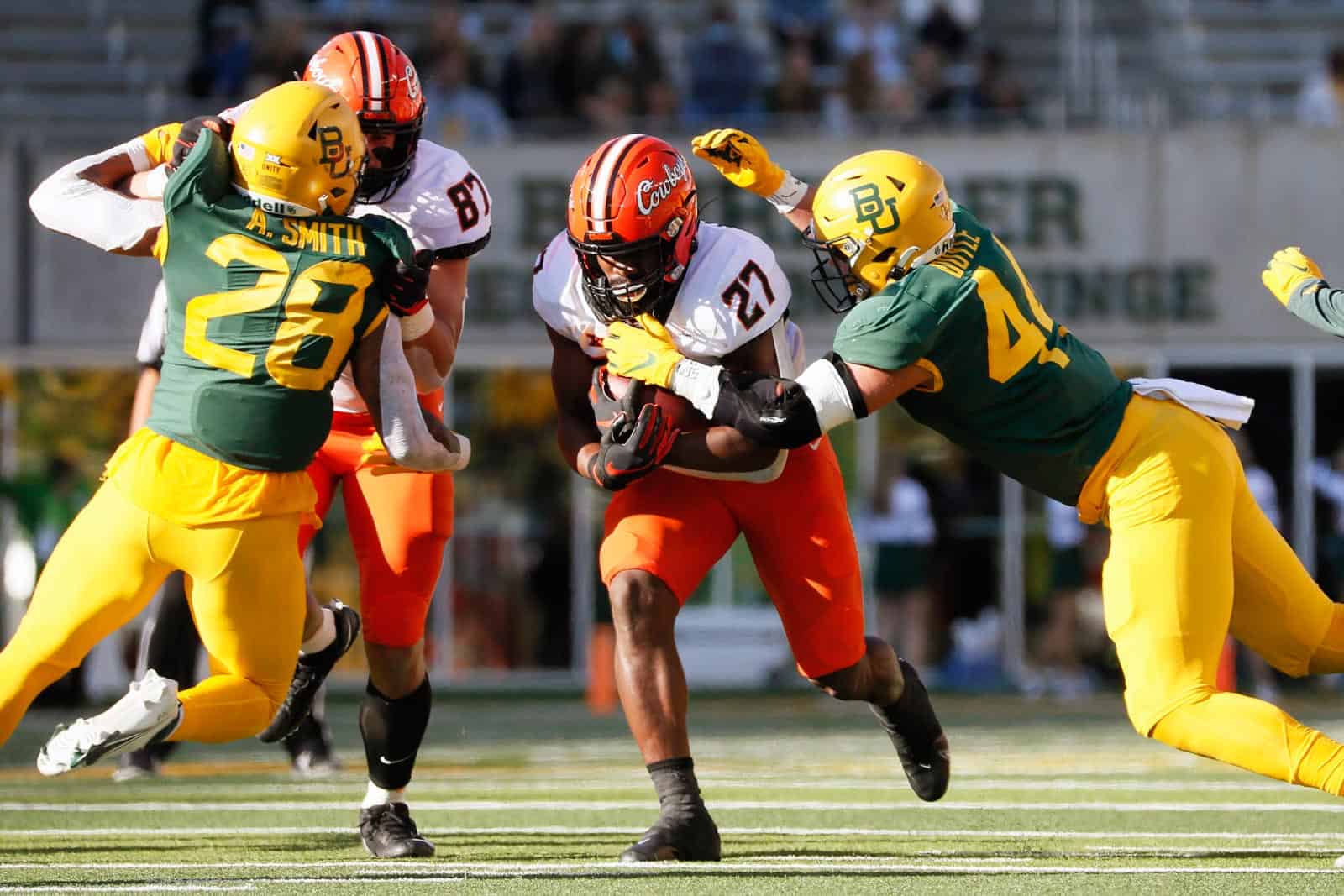 Week 5 of the college football schedule is when quality at last trumps quantity. While on one hand there are a season-low 61 total games on offer, on the other 100% are FBS vs. FBS pairings (meaning no FCS opponents are on the schedule) and four feature ranked vs. ranked matchups.

It’s also the week that the entire Top Ten will be tested. Half of the upper crust (including the top two programs) will face a ranked foe (two of these matchups are between Top Ten teams) and the other half are all playing a worthy conference opponent.

Despite the 0-2 start in ACC play, Virginia is currently ranked No. 1 in the FBS in passing offense and is fresh off racking up 553 air yards in a loss at North Carolina and 406 last week vs. (24) Wake Forest. It sets up well against Miami – a team ranked No. 13 in the ACC and No. 93 nationally vs. the pass. Check out Cavalier junior Brennan Armstrong (#5), averaging 426 yards per game he’s the No. 1 QB in college football.

Arkansas’ glorious 4-0 run has been powered by an offense that’s ranked No. 8 nationally in rushing yards per game. It’s a strength that will be severely tested against Georgia, which just so happens to be ranked No. 7 in the FBS vs. the run. These are the same guys that allowed a whopping two rushing yards in their opening win vs. (25) Clemson.

In what may be the best matchup in Week 5, tune in to this one to see Michigan’s ground game – ranked no. 5 in the nation – take on a Wisconsin D ranked No. 1 in the FBS vs. the run. Where the Wolverines are averaging 291 rushing yards per game the Badgers are allowing 23 (50 to No. 4 Penn State, 16 to Eastern Michigan and 3 to No. 9 Notre Dame). Check out Michigan sophomore RB Blake Corum (#2) – the No. 9 rusher in the FBS.

Pitt is quietly ranked No. 4 in the nation in passing offense. It’s a strength that pairs ever-so-well with Georgia Tech’s D, ranked No. 2 in the ACC and No. 23 overall vs. the pass. The Yellow Jackets held (25) Clemson to 126 air yards in Week 3. Keep an eye on Pitt senior QB Kenny Pickett (#8), not only is he No. 6 nationally in passing yards per game but he is also ranked No. 2 overall in passer rating.

Cincinnati is a two-point favorite over the Irish but haven’t beaten a Top Ten opponent since downing then (7) Rutgers 30-11 in 2006. The Bearcats have never beaten a Top Ten foe on the road.

Things that aren’t shocking: Ohio State is ranked No. 11 in the nation in pass offense and is a 15-point favorite over Rutgers. Things that may surprise you: the Scarlet Knights are ranked No. 15 in the FBS and No. 1 in the Big Ten in pass defense.

Florida State hasn’t started a season with five consecutive losses since 1974 and are only 4.5-point favorites vs. Syracuse.

Nevada may have the No. 10 passer in the FBS in junior QB Carson Strong (#12) but Boise State’s got the No. 4 tackler in college football in junior safety JL Skinner (#0).

Florida has more rushing yards than passing yards in each of its first four appearances. It’s a streak that included hanging up 244 ground yards and four rushing TDs on (1) Alabama, which has, on average, allowed 120 rushing yards per game thus far. Enter in Kentucky – which is giving up 87.5 yards per game on the ground (No. 21 in the FBS, No. 3 in the SEC) – and this one may be more interesting than advertised.

In yet another epic strength vs. strength matchup, it’s Mississippi State’s passing attack (ranked No. 6 in the FBS) taking on an Aggie D ranked No. 4 nationally vs. the pass. Where the Bulldogs are averaging 363 air yards per game, TAMU is allowing a mere 119.

Baylor won a total of two games last year and finished ranked a dismal No. 123 in the nation in rushing yards per game. Speed forward to this season and the Bears are off to a perfect 4-0 start and are ranked No. 6 – in the nation – in rushing offense. Holy plot twist! After playing two of the poorest rushing defenses in the FBS in Texas State and Kansas, Baylor faced Iowa State in Week 4 (ranked No. 6 vs. the run) and posted its fewest rushing yards of the season (123) in a narrow 31-29 upset win. This week it’s Oklahoma State, currently No. 19 in rushing D and fresh off limiting Boise State to 61 ground yards in Week 4 and K-State to 62 last week.

While this one doesn’t look like the stuff that upsets are made of, did you know that 4-0 Michigan State is ranked No. 107 in the FBS vs. the pass? It’s the second most generous unit in the Big Ten. Cue up Western Kentucky – owner and operator of the No. 2 ranked passing attack in the Americas – and wait a second…could this be something? Filed under the heading “Week 5’s unlikely hero’s” is Hilltopper senior QB Bailey Zappe (#4) – No. 2 in the FBS in passing yards per game and No. 3 in passer rating.

9: Washington has won 9-straight over Oregon State (last loss in 2011)

This matchup features one of the most potent offenses in the FBS taking on a defense that has struggled epically thus far. In one corner it’s the balanced attack of SMU – ranked No. 9 nationally in scoring, No. 14 in passing yards per game and No. 23 in rushing – and in the other it’s USF’s D – ranked No. 117 in points allowed, No. 111 vs. the pass and No. 123 vs. the run. Only four teams in the entire nation have averaged more yards per game than has SMU this year (549.8) while only two have allowed more yards than have the Bulls (504.8). Yikes!

Where Arkansas State has been dominant through the air (No. 7 in the FBS in passing yards per game) only five teams in the nation have allowed more passing yards than has Georgia Southern (No. 125 in pass D). But wait! There’s more. Where the Eagles have been successful running the ball (their option attack is No. 15 in the FBS in rushing yards per game) the Red Wolves have been super generous vs. the run (No. 114 in the nation).

At 4-0 Army is off to its best start since 1996. While it’s no surprise that the Black Knights’ option offense is ranked No. 2 in the FBS in rushing yards per game it’s a strength that may look like a superpower vs. a Ball State D that’s currently ranked No. 108 in the nation vs. the run. It’s the same unit that coughed up 272 ground yards last week in a loss to Toledo – a team that came into the game averaging 114 rushing yards per game. Keep an eye on Army senior QB Christian Anderson (#4) (questionable after suffering a shoulder injury last week) – the top rushing QB in the nation and fresh off a 236-yard performance last week vs. Miami Ohio.

THE ANNIVERSARY AWARD – Bowling Green at Kent State – Saturday, 3:30pm ET, ESPN+ – series started in 1920 – Bowling Green leads 60-22-6 but Kent State has won three-straight. If the Golden Flashes win again this year, it will mark their longest winning streak in the series.

The Anniversary Award dates to 1985 when the alumni associations of both schools established a traveling trophy to commemorate the 75th anniversary of each institution. Both were founded in 1910 in northern Ohio – Bowling Green in the west and Kent 150 miles to the east. The Falcons have won 25 Anniversaries vs. the Golden Flashes’ ten.

The Shula Bowl and Trophy kicked off in 2002, the first year the two schools (located only 60-miles apart in South Florida) met on the gridiron. FAU first fielded a football team in 2001, FIU followed in 2002. The game and trophy are named in honor of legendary Miami Dolphins coach Don Shula, who was a “mentor of the first coaches at each school…Howard Schnellenberger (FAU’s head coach from 2001-11) served as Shula’s offensive coordinator at Miami during the 1970s, including the Dolphins’ perfect season in 1972. Don Strock (FIU’s head coach from 2002-06) was a quarterback for Shula’s Dolphins from 1974-87.”

What sets the Golden Screwdriver apart from all the other FBS rivalry trophies is that it’s not an official part of the game its associated with. At least not yet. It all began at the 2002 game, when then Hawaii head coach June Jones claimed to have been hit in the head by a screwdriver hurled from the stands at the end of his team’s 31-21 win in Fresno. The trophy, a golden screwdriver implanted in artificial turf on a rustic wooden base “commemorates” the altercation. Its creation is the result of a Fresno radio station’s call for listeners to design an annual award for the rivalry game.

Not to be confused with Akron and Kent State’s Wagon Wheel,  the Old Wagon Wheel  was established in 1948 by fraternities at BYU and Utah State and is “believed to be from Jim Bridger’s chuck wagon, the first vehicle to enter the Utah Valley.” Bridger (also the namesake of the “Bridger Rifle” that Utah State and Wyoming play for) was one of the first Americans to visit the territory that became Yellow Stone National Park. He’s also credited with discovering the Great Salt Lake. The Cougars have won ye Ole Wheel 41 times vs. the Aggies’ 25.

The O’Rourke-McFadden dates to 2008 and honors the two All-American quarterbacks who played in the first-ever clash between Boston College and Clemson – the 1940 Cotton Bowl – when “Banks” McFadden led his Tigers to a 6-3 win over the Eagles’ “Chuckin’” Charlie O’Rourke. The loss was the last-ever in O’Rourke’s collegiate career, the next season he led BC to an 11-0 record and the only national championship in program history. The Eagles have only won the trophy once, in 2010.

One of nine bells awarded in FBS rivalries, Duke and North Carolina’s version of the Victory Bell was established in 1948 by a cheerleader from each program to “foster friendly relations and eliminate vandalism between the two neighboring schools.” Originally, the winning team also earned the right to paint the cart which holds the Bell their unique shade of blue. This lasted until 2014, when the Tar Heels took the Bell back from the Devils after a 45-20 win in Durham and painted not only the cart Carolina blue but slathered the hue all over the visitor’s locker room at Wallace Wade as well as Duke’s practice field. The cart is now permanently painted to honor both schools. UNC has earned possession of the Victory Bell 47 times vs. the Blue Devils’ 25. The 1975 game ended in a tie.

Given that K-State beat the Sooners five straight times from 1993-97, if it can manage another upset this Saturday in Manhattan, extending its current streak to three wins, it will earn it a place in a very exclusive club: current Big 12 members to have scored three or more consecutive wins over Oklahoma on more than one occasion.

@AmyDaughters,
Dan-ke for stating what I’ve been waiting 4 all Season.

Preseason Autonomous 5 ranked Teams playing someone from their own Conference in the place of Patsy Dependent Conference Foes who have to travel to the Autonomous Team’s Stadium & are selected 95% of the Time because they’re an easy win.
If there aren’t any ranked Team upsets this Weekend, it will mean the unranked P5 Foes are overrated in the Sportswriters eyes as well.

September was very Fun because of all the 1AA Schools who did Upset a 1A Hosting Team. Could 2021 have had The most Upsets in a very long Time? Askin 4 a Friend. Heheh.

Holy crap do you put the work into this

But the only Teams who are guaranteed to be mentioned every Week are the Teams in the AP Top 10.
That’s the Privilege of being in the Top 10.