Breaking down Week 5 of the 2017 college football schedule 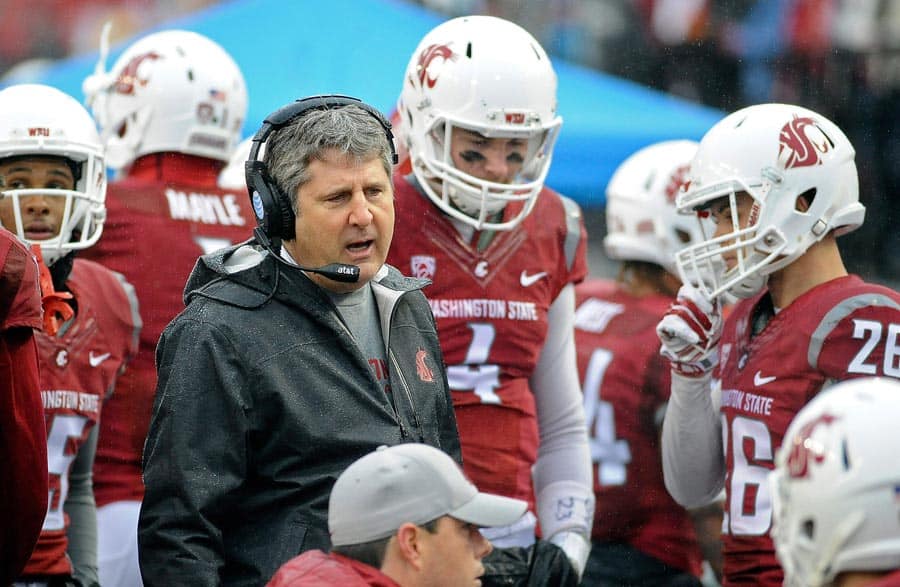 There are 54 games on tap for Week 5 of the college football schedule, one on Thursday, four on Friday, and 49 on Saturday.

It’s the fewest games on offer in 2017, that due to FCS games being limited to just one (No. 17 Louisville hosts Murray State) and byes jumping up to a season-high 23. Notables off this week are three members of the Top 10: (3) Oklahoma, (8) Michigan, and (9) TCU.

What Week 5 five does have going for it is three ranked vs. ranked contests, up from the two we enjoyed each in Weeks 3 and 4. Even better, the goodness is spread out between three of the Power leagues – the Pac 12, SEC, and ACC.

Also worth mentioning is a bump in quality viewing on Thursday and Friday nights. Texas travels to Iowa State on Thursday night (8pm EST, ESPN) and there’s lots to like on Friday – (14) Miami at Duke (7pm EST, ESPN), Nebraska at Illinois (8pm EST, FS1), and (5) USC at (16) Washington State (10:30pm EST, ESPN). All have upset potential.

Though Saturday night is stacked with the other two ranked vs. ranked games, keep an eye on (15) Oklahoma State at Texas Tech (8pm EST, FOX) and Ole Miss at (1) Alabama (9pm EST, ESPN).

Despite ranking No. 17 in the FBS in passing yards per game, USC sophomore quarterback Sam Darnold (#14) has thrown seven interceptions in four games. That ties him for the third-most picks in the entire nation. Cue up Washington State which has picked off five passes this season, tying it for the sixth most in the FBS. Keep an eye on Cougar sophomore safety Jalen Thompson (#34), he’s already scored three interceptions, No. 2 in the nation.

Another potential pick-fest, Boston College’s redshirt freshman quarterback Anthony Brown (#13) is tied with USC’s Darnold with seven interceptions. Even scarier is the matchup, pitting Brown vs. a Central Michigan defense that’s scored a whopping nine picks thus far, tied for the second most in the FBS. The Chippewa are led by senior defensive back Josh Cox (#14), who like WSU’s Thompson already has three interceptions, the same number he posted in 14 games as a junior in 2016.

Though both Navy and Tulsa’s rushing offense are ranked in the top 5 nationally, the Golden Hurricane D stands alone in its inability to stop the run this season. The gap is huge – the Midshipmen’s No. 2 ranked rushing attack (averaging 393 yards per game) vs. Tulsa’s No. 127 ranked rushing defense (allowing 294.5 yards per game). It means that only one team in the nation has rushed for more yards than Navy while only three have given up more ground yards than Tulsa. Check out Midshipmen junior quarterback Zach Abey (#9), not only is he the No. 1 rushing QB in the country (averaging 157 yards per game), he’s the No. 4 rusher in the FBS.

Oklahoma State ought to be angry after losing its place in the Top Ten to (9) TCU last Saturday. Despite the loss, the Cowboys still rank No. 5 in the FBS in passing yards. The combination of the two factors make the road trip to Lubbock to face Texas Tech’s No. 116 ranked pass defense tantalizing or terrifying, depending on where you went to school. Either the Red Raider defense will shock the world and prove they really have turned over a new leaf or Cowboy senior quarterback Mason Rudolph (#2) – still the No. 4 passer in the nation – will be back on the Heisman shortlist.

Despite a painful 1-2 start to 2017, UNLV ranks No. 8 in the nation in rushing, averaging 292.33 ground yards per game. It puts them just behind heavy weights like Alabama (No. 5 with 303.25 yards per game) and ahead of run-centric programs like Wisconsin (No. 12 with 275.33). It makes things look pretty-darn good coming into this weekend’s visit from San Jose State, the No. 126 ranked rush D in the FBS. The Spartans have coughed up 279 ground yards per game including allowing 318 and three scores in a 61-10 loss to Utah State last weekend. Check out UNLV junior running back Lexington Thomas (#3), quietly the No. 7 back in college football, his seven scores are No. 3 in the FBS.

First up for grabs in the BYU-Utah State series is the Old Wagon Wheel, established in 1948 by fraternities at both schools, it honors the Mormon move westward in the mid-19th century, done in covered wagons. BYU has won the Wheel 40 times vs. Utah State’s 23.

Next is the Beehive Boot, the award given to the annual winner three-way rivalry between BYU, Utah and Utah State. The Boot itself, first awarded in 1971, is a 100-year old pioneer boot sourced from where else, the Beehive State (the state’s nickname was chosen because it’s the symbol of hard work and industry). BYU has won 22 boots vs. Utah’s 15 and Utah State’s 9. The Utes have won the last two and three of the last four. The Cougars haven’t worn the boot since 2009.

Utah beat BYU 19-13 on Sept. 10. Utah and Utah State aren’t slated to meet this year. In case of a tie, a media vote decides the winner of the boot.

The James Bonham Trophy – South Carolina at Texas A&M – series started in 2014, Texas A&M has won all three games in the series.

(22) Notre Dame and Miami (Ohio) meet for only the second time in history this Saturday, that despite both being among the 20 oldest programs in the FBS. Their only-ever meeting was 108-years ago, in 1909, also the first season the field goal went from being worth four points to three.

Though the Irish have won 13 national titles in their storied history, Miami – also known as the “Cradle of Coaches” – has produced seven head coaches who combined have won 12 NCAA national titles plus two Super Bowls and three NFL Championships.

In addition, Sean McVay (Miami class of 2008) is currently the head coach of the Los Angeles Rams.

UNLV might rush for 500 yards against the Spartans this week