Breaking down Week 12 of the 2017 college football schedule 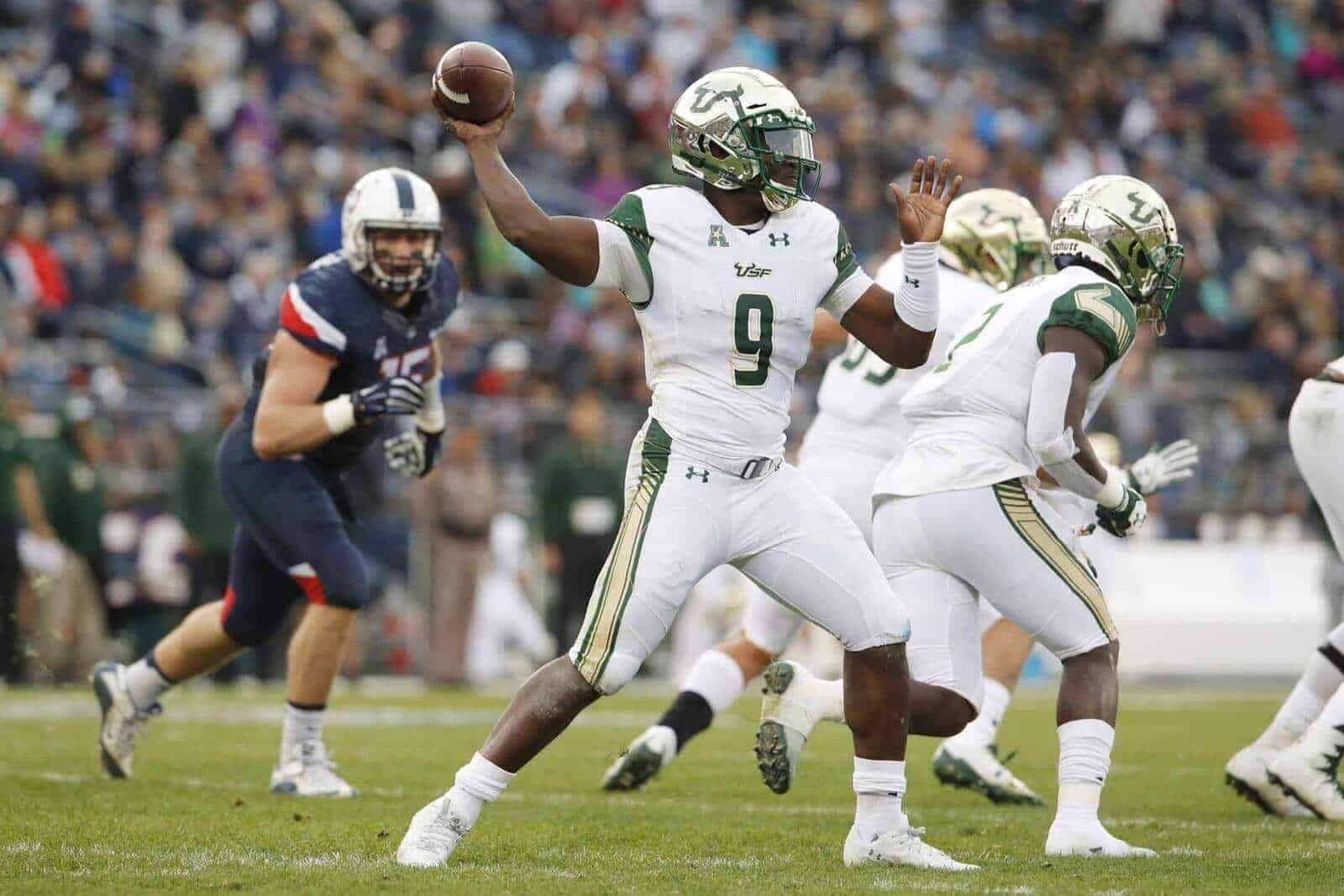 Week 12 of the college football schedule marks the second to last full weekend of the regular season. So, while it might not be as sexy as the last two weeks, it’s precious.

For any dissenters, imagine a cold Saturday in February with nothing to cuddle up with but a basketball.

What’s missing this week is the promise of any true elimination games, where top ranked teams square off for one step towards the Playoff bracket. What’s left in its wake is the possibility of an earth-shattering upset.

From the cheap seats, the Hurricanes look the most vulnerable, coming off a huge, confidence-bursting win over Notre Dame and taking on a Cavalier defense that quietly ranks No. 16 nationally vs. the pass.

Looking at Week 12 from a bigger picture standpoint, there are nine games before the weekend, but none feature a Power squad nor a member of the Top 25. The only Ranked vs. Ranked game comes early on Saturday when (5) Wisconsin tries to stay in the conversation with a visit from (24) Michigan.

The biggest mismatch of Week 12, tune in to see the No. 7 rushing attack in the FBS (USF) take on the No. 128 ranked rushing defense (Tulsa). Only UCLA has given up more ground yards than the Golden Hurricane this season, while only six teams nationally have averaged more rushing yards per game than the Bulls. Rather than relying exclusively on one back, USF has shared the love equally with three. Check out senior running backs Darius Tice (#6) and D’Ernest Johnson (#2) and senior quarterback Quinton Flowers (#9). Combined, they’ve rushed for 2,162 yards and 25 scores.

Memphis sophomore running back Tony Pollard (#1) is the No. 1 kickoff return man in college football. In 15 tries he’s racked up 617 yards and three scores. That’s an average of 41.13 yards per return. The stars align for Pollard this Saturday vs. an SMU coverage team that is tied for the third worst unit in the FBS. The Mustangs have already allowed eight kickoff returns of 30-plus yards – included are two returns of 40-plus, two of 50-plus, one of 60-plus and one of 70-plus.

In a twist of fate, the top three quarterbacks in the FBS are set to face three of the worst pass defenses in the nation this Saturday. Hunker down with an adequate supply of chicken wings and prepare for a yardage explosion.

Oklahoma senior Baker Mayfield (#6) is the No. 2 quarterback in college football in yards per game (355.9) and No. 1 passer rating (202.10). Look for him to explode against Kansas’ No. 117 ranked pass defense, giving up an average of 275.5 yards per game. It’s the same unit that coughed up 467 air yards and five passing touchdowns in a loss to Central Michigan earlier this season. Mayfield ought to take one huge step towards the Heisman in this one.

Only East Carolina and UConn have given up more passing yards per game than Kansas State (303.4). It also means it’s the worst pass D in a Big 12 short on stoppage. Cue up Oklahoma State senior Mason Rudolph (#2), the No. 1 quarterback in the nation, and you get the picture. He’s thrown for 400-plus yards in three games this season while the Wildcats have allowed more than 400 on three different occasions.

Haven’t heard of New Mexico State senior Tyler Rogers (#17)? Averaging 354.4 yards per game, he’s the No. 3 quarterback in the FBS. In his last outing at Texas State on Nov. 4th he racked up 474 yards and three scores. His 10.3 yards per attempt and passer rating of 171.11 were both season highs. Look for Rogers to go off vs. a UL-Louisiana defense ranked No. 115 against the pass, the worst in the Sun Belt. Only three teams in nation have given up more passing TDs than the Ragin Cajuns (25).

The Shula Bowl and Trophy kicked off in 2002, the first year the two schools, only 60-miles apart, met on the football field. FAU first fielded a football team in 2001, FIU followed in 2002.

The result of a collaboration between honor societies at the two schools, the tradition of the Illibuck dates to 1925. The first two winners – Illinois in 1925 and then Ohio State in 1926 – received a live turtle, the animal chosen because it’s longevity, mirroring the rivalry between the two schools. Ironically, the live turtle died in 1927 and from that season on the winner has been awarded a 32-pound wooden turtle – affectionately known as Illy Illibuck. The Buckeyes have captured the replica tortoise 63 times vs. the Illini’s 22. The 1951 and 1963 games ended in a tie.

First awarded in 2011, Rip Miller was a member of Notre Dame’s Seven Mules, the line that blocked for the legendary Four Horseman from 1922-24. He went on serve as an assistant at Navy from 1925-30, taking over the head job in 1931. As a coach, he was part of efforts to establish the annual game between Navy and Notre Dame. Miller finished his career an assistant athletic director in Annapolis, a post he held from 1948-74. The Irish have won the prize honoring his legacy five times vs. the Midshipmen’s one.

A renewed tradition, the Saddle Trophy is due to be awarded to the winner of the TCU-Texas Tech series for the first time in 47 years. The original award dates to 1961, Tech’s second season in the Southwest Conference, when the Lubbock Avalanche Journal and the Fort Worth Star-Telegram hooked up to honor the yearly winner. It was a part of a move to brand the rivalry as “The West Texas Championship of the Southwest Conference.” The Saddle was in use until 1970, when it mysteriously disappeared. At that time, each school had won the traveling prize five times apiece. There has been a push to resurrect the Saddle since TCU joined the Big 12 in 2012, an effort that finally comes to fruition this season.

Awarded to the winner of the Big Game, the tale of the Axe  begins with a series of baseball games between the two schools in 1899. That’s when the Axe was purchased, “probably from Sears” by Stanford fans and painted red. During the three-game series, Cardinal enthusiasts used the Axe to chop up a variety of Cal related items, including beheading a scarecrow wearing school colors. After Stanford blew a late lead in game three, Cal fans stole the Axe.

One of seven bells awarded in FBS rivalries, USC-UCLA’s Victory Bell dates back to 1939 when the UCLA Alumni Association gave the bell, a massive 295-pounder off a locomotive, to its alma mater. The Bruins rang the bell after each football score for two seasons until 1941, when members of a USC fraternity, disguised as UCLA fans, stole the bell during the season opener.

After a series of shenanigans, the two schools signed an agreement before the 1942 game to award the bell to the winner of the cross-town rivalry. The recipient earns the privilege of painting bell’s carriage its school colors, which the Trojans have done 43 times vs. the Bruins’ 31. Four games (1944, 1958, 1971 and 1989) ended in a tie.

This Saturday, the two FBS schools hailing from the state of Arizona are scheduled to travel to play the two institutions representing Oregon. The Arizona State Sun Devils visit Oregon State in Corvallis at 3pm EST and the Arizona Wildcats square off with Oregon in Eugene at 7pm EST. Both games are on the Pac-12 network.

It’s only the second time in history that the two states have played a round robin on the same date and the first time ever it’s all gone down within one of the two’s boundaries.

The only other complete exchange came 37 years ago, on Nov. 22, 1980. Like this year, it was also a Saturday, but the four teams swapped opponents – Arizona visiting Oregon State and Arizona State hosting Oregon.

The Wildcats beat the Beavers 24-7, capping off a 5-6 campaign in Larry Smith’s first year as head coach. For Oregon State, it was the tenth loss in an 0-11 finish, the only winless season in school history.