Breaking down Week 11 of the 2021 college football schedule 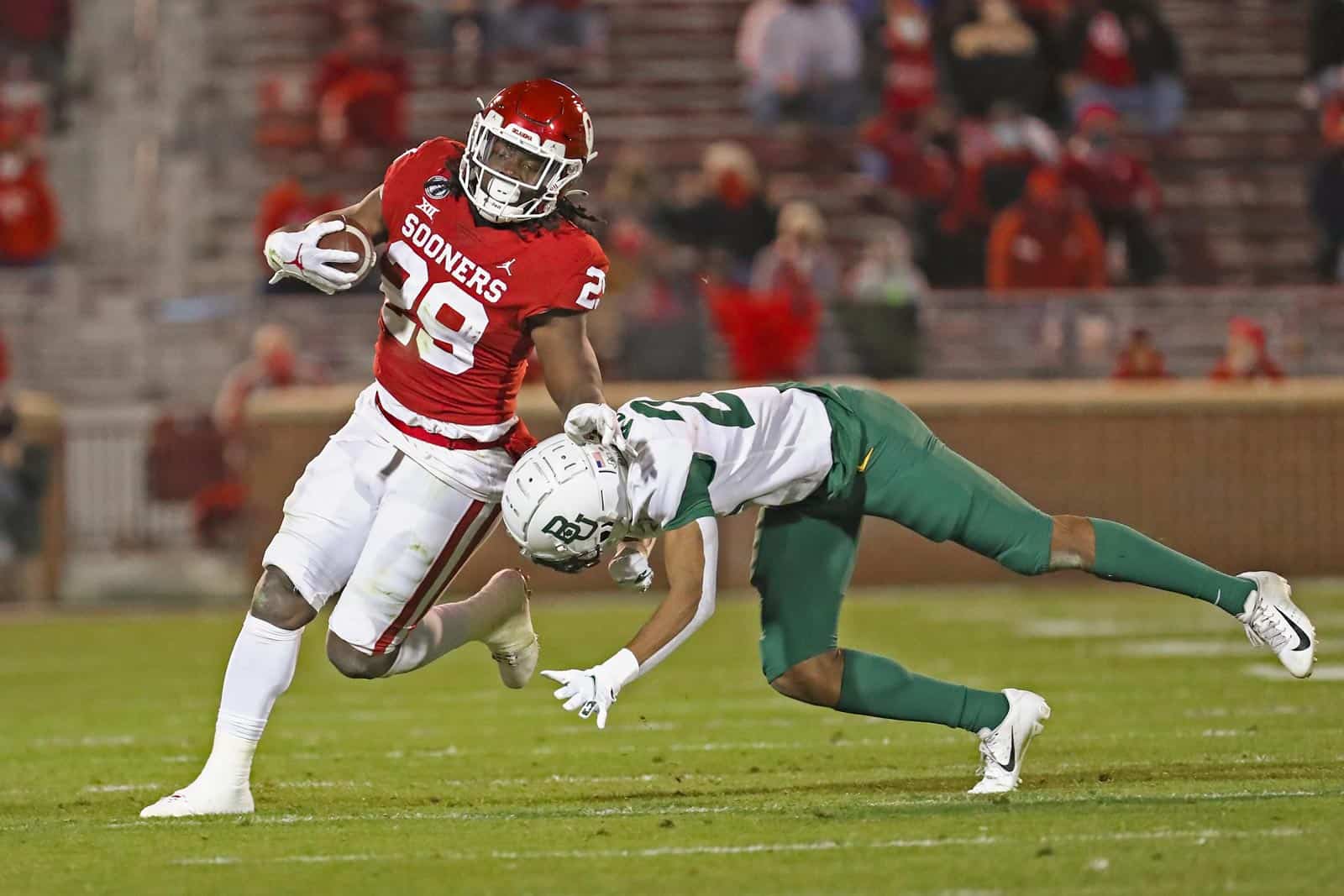 Breaking down Week 11 of the 2021 college football schedule

With only three weeks remaining in the regular season and four ranked vs. ranked matchups on tap, Week 11 of the 2021 college football schedule literally has it all.

While there’s no way to predict what the CFP committee will do next in its quest to, apparently, create controversy, we do know that among its latest Top Ten only three members are favored by fewer than 13-points this week. (6) Michigan is a one-point favorite vs. Penn State, (8) Oklahoma is a 5.5-point favorite over (13) Baylor and (9) Notre Dame is favored by 5.5 vs. Virginia.

That said, and all logic aside, based on 2021’s proven track record it’s more likely that the next shocking upset is hidden under the dangerous auspices of a “sure thing.”

As a note: USC at Cal (originally scheduled for this Saturday at 3:30pm EST on FS1) has been postponed until Saturday, Dec. 4th due to COVID-19.

After hanging up a career high 438 air yards and three scores in a three-point loss to Eastern Michigan last Tuesday, this week Toledo redshirt freshman QB Dequan Finn (#7) will square off with a Bowling Green defense that’s quietly earned a No. 12 rank – in the nation – vs. the pass.

Ball State’s defense – ranked No. 94 nationally vs. the pass – is fresh off giving up 331 air yards to an Akron offense averaging 224. Cue up Northern Illinois, which has racked up a total of 883 passing yards and six scores on its last two opponents, and things could get aerial. Check out NIU junior QB Rocky Lombardi (#12) – while he’s no relation to legendary coach Vince Lombardi, he did start his collegiate career at Michigan State.

This game features the No. 4 back in America – CMU redshirt freshman RB Lew Nichols III (#7) – taking on a Kent State defense ranked No. 110 nationally vs. the run. Nichols has averaged a cool 169 rushing yards in his last four outings.

Not only does this one feature the No. 5 QB in the land – Pitt senior QB Kenny Pickett (#8) – it’s got both the No. 6 and the No. 8 receivers respectively in North Carolina sophomore WR Josh Downs (#11) and Panther sophomore WR Jordan Addison (#3). Which defense can handle the truth?

Oklahoma’s defense is ranked a lofty No. 17 nationally vs. the run, giving up, on average a paltry 111 ground yards per game. Baylor – currently No. 8 in the FBS in rushing yards per game (232) – is the best ground attack the Sooners have faced this season. Keep an eye on Bears’ senior RB Abram Smith (#7), the No. 8 back in America.

While it’s not likely that the Goliath-like Buckeyes will overlook the David-esque Boilermakers, this game features OSU’s No. 6 nationally ranked passing offense taking on a Purdue D ranked No. 15 in the FBS vs. the pass. On the flip side, it’s the Boilermakers’ air attack – ranked a lofty No. 8 in America – taking on a Buckeye D that’s ranked No. 96 nationally and No. 11 in the Big Ten vs. the pass. Surely lightning can’t strike thrice…

This under-the-radar selection features the top team in the C-USA East (6-3 Marshall) squaring off with the No. 2 squad from the West (6-3 UAB). It’s also a Thundering Herd passing attack – the No. 7 ranked unit in all the nation – trying to get ‘er done against a UAB squad ranked No. 23 in the FBS in total defense.

After coughing up 536 air yards to (19) Purdue in last week’s upset loss, Michigan State is ranked dead last in the entire nation in pass D. This week it’s Maryland – owner and operator of the No. 14 ranked passing attack in the FBS – standing between the Spartans and a much-needed rebound.

Oregon State is quietly the top ranked rushing attack in the Pac-12, averaging 230 yards per game – earning it the No. 10 slot in the FBS. Cue up Stanford – ranked a very un-Cardinal like No. 127 nationally and dead last in the league against the run – and the Beavers (favored by 12 points) could snap an 11-game losing skid vs. Stanford.

While you might not be surprised to hear that Ole Miss is ranked No. 21 nationally/No. 3 in the SEC in passing offense, did you know that the Rebels are No. 5 in the FBS/No. 2 in the conference in rushing yards per game? It sets up ever so well against an Aggies D ranked No. 28 nationally/No. 5 in the league vs. the run. Where Ole Miss is averaging 238 ground yards per game, Texas A&M is allowing 123.

A must-win game for both teams, the victor will take the lead in an ACC-Atlantic race that, at least for now, is sans Clemson, which has won six-straight division crowns.

The Longhorns’ four-game losing skid ought to end with a bang vs. Kansas – home to a defense ranked No. 128 nationally in both scoring and vs. the run. Look for Texas sophomore RB Bijan Robinson (#5) – the No. 6 back in the FBS who suffered from a “stinger” in the loss vs. Iowa State – to have a big night if healthy.

After finding its footing with an interim head coach, a new starting QB and an upset win over (13) Baylor, this week TCU draws the one-loss Cowboys. Look for Horned Frog redshirt freshman (and Oklahoma transfer) QB Chandler Morris (#14) – who threw up 461 yards vs. the Bears – to be severely tested against an OSU D ranked No. 22 in the Americas and No. 2 in the Big 12 vs. the pass.

These two are both 4-1 in MWC action, putting them at the top of the West division. Saturday night’s winner will be one step closer to a conference championship game appearance.

THE BATTLE OF I-75 TROPHY – Toledo at Bowling Green – Wednesday, 7pm EST, CBSSN – series started in 1919 – Toledo leads 41-40-1 but the pair split the last two, the home team winning on each occasion.

One of two FBS rivalry awards named after a freeway, the I-75 Trophy replaced the 31-year old Peace Pipe Trophy in 2011. The two schools are located only 30 minutes apart, a quick trip on Interstate 75 in northwestern Ohio. The Rockets have won the newer prize nine times vs. the Falcons once.

One of the most unique FBS trophies, the Floyd of Rosedale is a bronze statue of a pig honoring an actual pig. The original animal was the price of a bet on the 1935 game between Minnesota Governor Floyd Olson and Iowa Governor Clyde Herring. The pig, a prize hog, hailed from Rosedale, Iowa. The Golden Gophers won the real pig in a 13-6 decision, ultimately finishing the season 8-0 and capturing the second of their three consecutive national titles. Since then, the Hawkeyes have brought home the bronze edition of Floyd 42 times vs. the Gophers’ 41. The 1970 and 1951 contests both ended in ties.

Though the series dates to over 100-years ago, the Golden Boot (formed by combining the two states geographically) wasn’t introduced until 1996, Arkansas’ fifth season in the SEC. The trophy is a 24-karat gold whopper—four-feet high and weighing in at 200 pounds.  LSU has won the Boot 17 times vs. the Razorbacks’ eight.

The Ram-Falcon was the brainchild of the Air Force ROTC unit at Colorado State. First awarded in 1980, the trophy itself is a depiction of a Ram and Falcon squaring off atop a wooden base. Air Force has captured the prize 25 times vs. CSU’s 15.

When New Mexico State takes the field vs. (2) Alabama on Saturday it will mark the 25th time the Aggies have attempted to score a win over a current SEC member.

It also marks the most-lopsided, all-time record between an FBS program and an opposing FBS conference. The only other schools that have never beaten a certain league with double-digit tries are:

Dan-ke for your usual recent History & Statistics based analysis of the 1A Games this Week.

In the Streakers & Never-land Sections this Week & over the last several I’ve noticed an Elephant in the Room which each Autonomous 5 Conference chooses to See of the other 4 + the 5 Dependent Conferences & Independents & avoid recognizing in itself.

I know that you’ve known this for a long time but I’m not informing you of anything, maybe the few who read the Comments may See something.