Breaking down Week 10 of the 2019 college football schedule 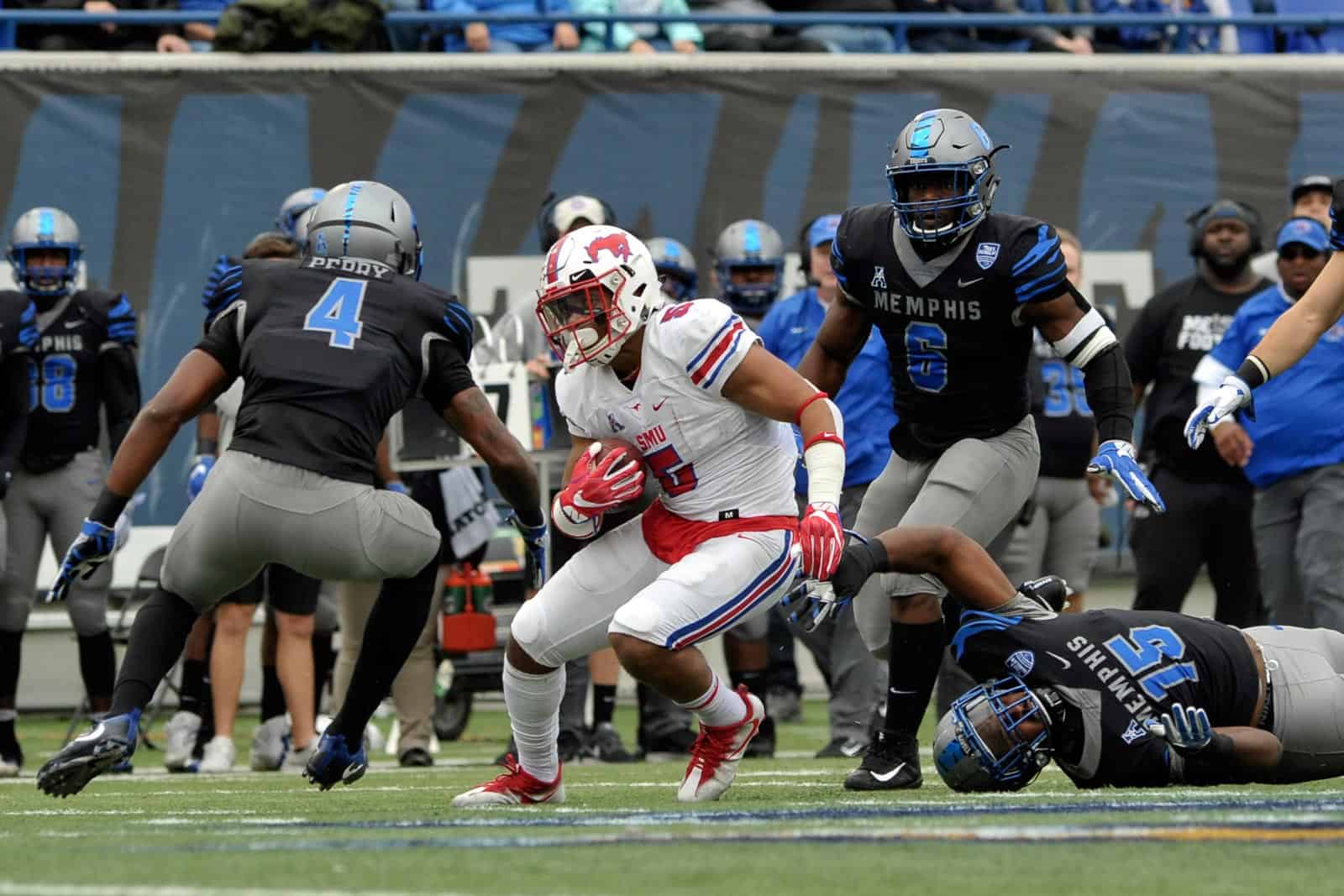 With a season-high 35 teams off – including nine members of the AP Top 25 – Week 10 of the college football schedule is a lot less obvious in its potential goodness than previous weeks.

A whopping four members of the AP Top 5 are on a bye (a curious occurrence given the first CFP rankings are due out next Tuesday, Nov. 5), but several “second-tier” contenders are set to be tested – (6) Florida vs. (8) Georgia, (7) Oregon at USC, (9) Utah at Washington, and (12) Baylor vs. West Virginia. A win in each of these contests is critical for programs with hopes of slipping into a playoff slot if one of the current top-ranked squads fall from perfection.

Things get started on Thursday night with two games at 8pm EST each featuring a 7-0 ranked team – West Virginia at (12) Baylor (ESPN) and Georgia Southern at (20) Appalachian State on ESPNU. That leaves Friday night’s single contest, also at 8pm EST (ESPN2), Navy at UConn. Keep in mind that the Midshipmen are ranked No. 1 in the nation in rushing offense while the Huskies are No. 102 vs. the run.

Saturday gets off to a slower start with (14) Michigan at Maryland on ABC and NC State at (23) Wake Forest on ESPN, both air at Noon EST.

Though Virginia Tech visits (16) Notre Dame at 2:30pm EST on NBC, Week 10’s biggest attraction is (8) Georgia vs. (6) Florida on CBS at 3:30pm EST. Secondary options include (22) Kansas State at Kansas on FS1 (a rivalry game with both squads fresh off big upset wins) along with Miami Fla. at Florida State on ABC and TCU at Oklahoma State over on ESPN.

Tune in to this one to see the No. 4 receiver in college football – Liberty senior WR Antonio Gandy-Golden (#11) – take on the most generous defense in the land. UMass is currently ranked No. 130 (or dead last) in scoring D, No. 130 vs. the run and No. 119 vs. the pass. It is the only unit allowing 50-plus points per game this season (50.6). Gandy-Golden has already earned 100-plus receiving yards five times this season including hanging up 174 yards on Buffalo and 181 vs. FCS Hampton.

The biggest statistical mismatch in Week 10, Louisiana is quietly ranked No. 3 – in the nation – in rushing offense, its 286.86 yards per game sandwiching it between No. 2 Air Force (322.5) and No. 4 Ohio State (284.25). It’s a number that ought to rise even higher against a Texas State defense ranked No. 122 vs. the run – only eight teams in the nation have been more generous. The Ragin’ Cajuns are fresh off rushing for 315 yards and scoring five rushing TDs at Arkansas State (in Week 8, before their Week 9 bye) while the Bobcats most recently coughed up 200-plus ground yards and three scores apiece in back-to-back losses to ULM and Arkansas State. Louisiana’s ground attack is led by the fantastic trio of junior Trey Ragas (#9), junior Elijah Mitchell (#15) and senior Raymond Calais (#4) who have already hooked up for 1,641 yards and 22 TDs.

After winning its first four games of the season, Virginia has dropped three of its last four to the likes of (16) Notre Dame, Miami Fla. and Louisville. Hidden in its statistical DNA are 32-recorded sacks, tying it with (18) Wisconsin for the fourth-most in the FBS. It sets up for an under-the-radar mismatch against North Carolina, who with 27 sacks allowed has given up the sixth-most in the entire nation. Keep an eye on Cavalier senior inside LB Jordan Mack (#4) (who will miss the first half of the game due to a targeting call last week), sophomore outside LB Noah Taylor (#14) and junior inside LB Zane Zandier (#33), combined they’ve recorded 16.5 sacks for 103 lost yards.

The three-way contest between Army, Navy and Air Force, the Commander in Chief was established in 1972 to ensure that the newer Air Force Academy (which kicked off football in 1957) would play Navy and Army (both dating back to 1891) annually. The Falcons lead the way with 20 trophies, followed by the Midshipmen with 15 and the Black Knights with eight.

Navy beat Air Force 34-25 on Oct. 5. Since Army currently possesses the trophy, the winner of this year’s Army/Navy game (Dec. 14 in Philadelphia, Pa.) will claim the Commander in Chief’s Trophy this season regardless of what happens Saturday in the Air Force-Army game.

Awarded to the winner of the three-way battle between Florida/Florida State and Miami Fla., the Florida Cup (also known as the “state championship of Florida”) was established in 2002 by the Florida Sports Foundation. Though the Cup is 17-years old, it’s only been presented five times – from 2002-04 and in 2008 and 2013. While Florida State meets Florida (a non-conference fixture) and Miami Fla. (as permanent ACC cross-division rivals) annually, the three-way rivalry has been hampered by the limited number of times the Gators have squared off with the Hurricanes. The good news is, the two schools have just inked a deal for a series in 2024 and 2025.

Miami won the first three Cups (2002-2004) while Florida (2008) and Florida State (2013) have captured the two most recent. This season, the then No. 8 Gators beat the Hurricanes 24-20 in the opener in Orlando and the Seminoles close out the regular season with a visit to Florida on Nov. 30.

One of the three FBS Governor’s Cups, Kansas’ version has been awarded to the winner of the football edition of the Sunflower Showdown since 1969. The Jayhawks and Wildcats have played consecutively since 1911 and from 1902-39 competed for an earlier award called the Governor’s Trophy. K-State has won 29 Cups vs. Kansas’ 20.

Established in 2009 by the student governments of both schools, the Okefenokee is a 10-foot long oar, carved from a 1,000-year old cypress tree from the Okefenokee Swamp.  Covering nearly 700-square miles, the swamp straddles the Florida-Georgia state line. Each team has paddled home with the oar five times.

Established in 1948 by fraternities at both schools, the Old Wagon Wheel honors the Mormon move westward in the mid-19th century, a trek done in covered wagons. BYU has won the Wheel 40 times vs. Utah State’s 25.

With six teams off apiece from both the Big Ten and MAC there will be a serious lack of college football in the Midwest this weekend.

In Michigan, 40% of the field is off with Michigan State and Western Michigan enjoying a bye. In Ohio things are even leaner with a whopping 63% of its FBS programs taking a bye – (3) Ohio State, Kent State, Miami, Ohio University and Toledo. That leaves (17) Cincinnati, Akron and Bowling Green as the only teams in action.

Over in Pennsylvania, only one of its three FBS programs are playing – Pitt (who is out of state at Georgia Tech) – while (5) Penn State and Temple are off. That leaves Iowa which has both of its only two FBS programs with a bye in Week 10 – (19) Iowa and Iowa State.