Breaking Down Navy’s New Schedule in The American 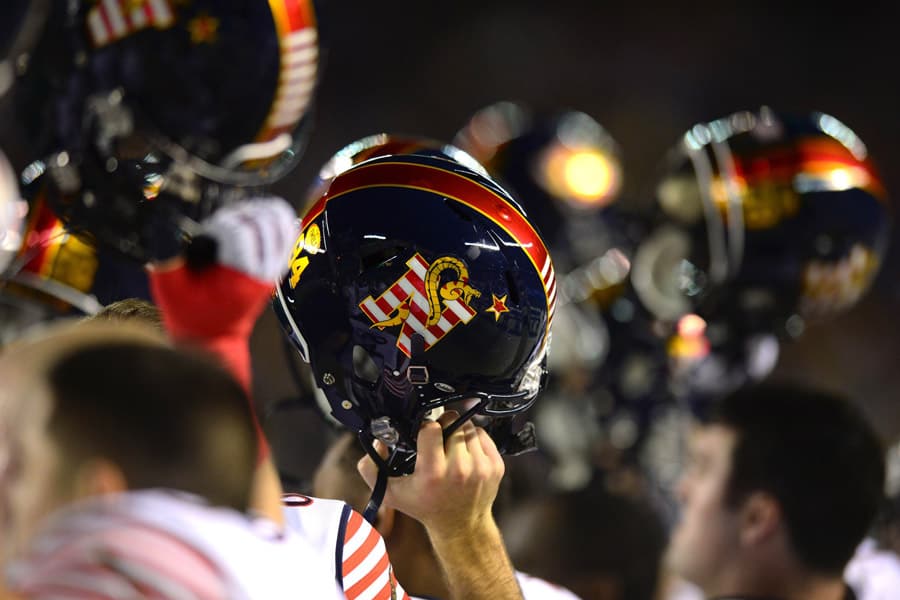 After spending 135 years as an independent, Navy joins the American Athletic Conference this season.

The move leaves Notre Dame standing as the only FBS program that has remained conference-free throughout its football history. The Irish earn the distinction due to Army’s seven-year fling with Conference USA, an affair which lasted from 1998-2004.

Two of the biggest knock-on effects of the historic move are the opportunity to play for a conference crown and major scheduling changes.

Conference membership equals Navy’s first-ever chance to win a league title. This is a huge deal because, believe it or not, the Midshipmen have never captured a football championship of any kind.

Next up is Navy’s schedule, which has been a wide-open affair for more than 100-years, morphing into a conventional line-up which includes eight conference games and four non-league clashes.

It’s a new era for Midshipmen football, sacrificing self-guided destiny for an opportunity to advance on to even bigger things than the very real honor of the Commander-in-Chief’s Trophy.

What Stays the Same?

The good news is, Navy’s three long-standing rivalries stay intact despite the move into a conference.

First up, the 115-year old series with Army will live on and remains the national season-ender. What’s curious about the arrangement is its placement after the American Athletic Conference championship game. This means the outcome won’t help, or hurt the Midshipmen in their quest for a title.

Next, the annual match with Air Force, the third part of the Commander-in-Chief’s Trophy equation, will continue. The two academies have met 47 times and consecutively since 1972. Though this game gets less billing than does Army-Navy, either the Falcons or Midshipmen have captured each of the last 18 Commander-in-Chief awards.

Last up, Navy will continue to play Notre Dame annually, a series that has been played every season since 1927. The 88 meetings between the two make the Irish the Midshipmen’s second-most played opponent in history.

Introducing eight conference games to a schedule that has been independent for all of its 100-plus year shelf life means major change. Here are the highlights:

Over the last seven years, Navy has averaged 3.7 regular-season games vs. teams who are current Power-Five members. The number includes the annual game with Notre Dame plus a handful of Big Ten and ACC programs. The Midshipmen played an SEC foe in the regular season as recently as 2011, when they got edged 24-21 by No. 10 South Carolina.

The move to the AAC means the number of Power-Five opponents will drop all the way to one, the annual game with the Irish.

Over the last several years Navy has filled the non-Power, non-rivalry portion of its schedule with a combination of teams from the Sun Belt, Mountain West, Conference USA, MAC and now defunct WAC.

All these games fall off the schedule in 2015 in favor of eight games vs. American Athletic members.

While Navy has what looks like a commanding all-time edge over AAC power-players like Cincinnati, the Midshipmen haven’t played the Bearcats since 1956. They have never faced UCF or Memphis, the two teams who shared the conference crown with Cincinnati in 2014.

With only four non-AAC games to work with and three annual meetings with Army, Air Force and Notre Dame, Navy is left with only one game to schedule at will each season.

This is significant because the Midshipmen have squared off with an FCS opponent consecutively since 2006.

What will the changes mean to Navy’s win/loss total?

First things first—you’ve got to give the Midshipmen a lot of credit for continuing to post winning records despite recruiting to what is a military academy and then playing three to four Power teams each year.

Navy has finished under .500 just once since 2003, a 5-7 hiccup in 2011. If that weren’t enough, 2011 is also the only season since 2002 that it slipped under the eight-win mark. Not many programs that don’t require military service can claim that.

Moving into the new era of Navy football, it’s logical to predict that the Midshipmen will pick up at least two wins a season with the drop in Power opponents.

This should be the case despite the slight upswing in difficulty due to dropping the Sun Belt and MAC type games and diminishing the FCS opponents.

And they won’t play the Big Ten or the ACC.

To illustrate, in 2014 Navy played regular-season games vs. 12 teams that went on to finish the season a combined 82-71 (54%). Included were the eventual national champion (Ohio State) and seven squads that finished .500 or better.

The net effect is not earth-shattering, but it should be somewhat easier for Navy to keep its winning streak going and possibly hit 10 wins more frequently (it went 10-4 in 2009 and 10-2 in 2004).

Beyond that, it will be exciting to see if the end result is Navy hoisting a conference championship trophy for the first time in its storied history.

This is really good for the Naval Academy.

Sorry, the author is wrong. Navy won the National Championship in 1926 with a 9-0-1 record. That said, moving to a conference is important for Navy and the long term financial success of the program

Wasn’t a consensus national championship, however, per the NCAA. Alabama, Stanford, and Lafayette are generally considered to be the champs that year.

Still have that messy CBS contract with the Army-Navy game fouling up Navy’s shot at an American conference championship leading to a New Year’s Six game though. Of course, how often is that *really* going to happen? Anyone want to lay odds on it?

How would it foul up Navy’s chances if they win the AAC championship game? They haven’t lost to Army in 13 years and don;t look to be losing to them any time soon. Perfect timing to me.