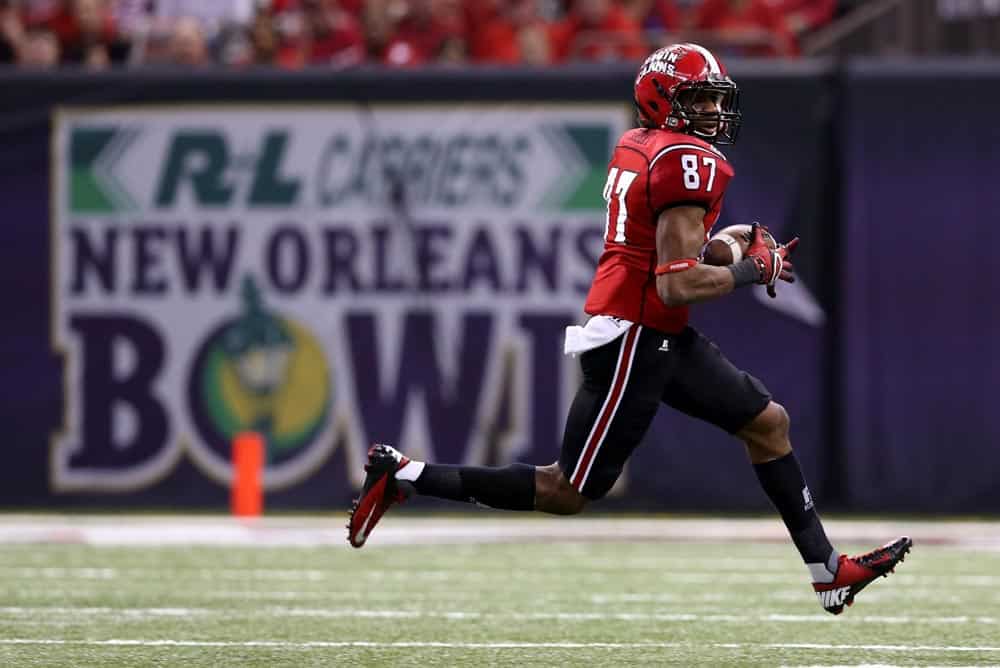 The bowl schedule starts with a bang this Saturday. With six FBS bowls and an FCS celebration, it’s the most games of any single day this bowl season.

Things kick off at noon EST on ABC with the Air Force Reserve Celebration Bowl – an FCS bowl game dating back to last season. After that, it’s a steady flow of games all the way until 9:00pm EST when Southern Miss and UL Lafayette square off in the New Orleans Bowl.

Arguably the best game of the day is Houston and San Diego in the Las Vegas Bowl at 3:30pm EST on ABC.

After a pause for the NFL on Sunday, things crank back up on Monday afternoon (Miami Beach), Tuesday night (Boca Raton) and Wednesday night (Poinsettia). Tuesday also marks the beginning of a glorious run of 12 straight nights (minus Sundays) with at least one televised college bowl game.

What follows is the 411 on each of the first nine games. Stay tuned moving forward as we break down the remainder of the schedule in eight game increments.

Most appearances: North Carolina AT&T and Alcorn State (1 each)

NC Central and Grambling State haven’t played since a pair of regular season meetings in 1985-86 in New York City. It’s also a rematch of the 1972 Pelican Bowl, a game Grambling won 56-6. NC Central’s only-ever bowl win came in 1954 when it beat Tennessee State 19-6 in the National Classic. For Grambling State, it last beat Florida A&M in the 1993 Heritage Bowl.

New Mexico and UTSA split a home-and-home series in 2013-14. The Roadrunners started playing football in 2011, this is the program’s first-ever bowl game. It’s a home game for the New Mexico, which posted a 5-1 record in University Stadium this season. The Lobos’ last bowl win came in the 2007 New Mexico Bowl when they beat Nevada 23-0.

Houston and San Diego State haven’t played since a home-and-home series in 1972-73. The game will be the first-ever as a head coach for Houston’s Major Applewhite, recently promoted from offensive coordinator to replace Tom Herman who left for Texas.

The Aztecs lost to North Carolina in the 1998 Las Vegas Bowl, it’s the Cougars first trip.

Previous editions:  In 1948 the Camellia Bowl was a one-time only game between Wichita State and Hardin-Simmons in Lafayette, La. From 1961-80 it was a season-ending quarterfinal game in Sacramento, Calif. for what is now called Division II.

The Mountaineers’ second-ever FBS bowl game after moving up to the FBS ranks in 2014. App State is 2-2 all-time vs. the current MAC membership; 0-2 vs. Ball State and 1-0 vs. Ohio. This is only the second current Sun Belt member Toledo has ever faced, the Rockets are 4-0 vs. Arkansas State.

Most appearances: Southern Miss and UL Lafayette (5 each)

Southern Miss and UL Lafyette have clashed 50 times previously – more than any other combo this bowl season with the exception of BYU-Wyoming with 77. The two shared conference membership from 1928-41 (Southern Intercollegiate Athletic Association) and 1948-51 (Gulf States) and were regular fixtures until they last played in 2008. The Golden Eagles have won eight straight over the Ragin’ Cajuns.

UL Lafayette’s entire bowl record consists of four straight New Orleans Bowls from 2011-14. Southern Miss hasn’t won a bowl game since 2011 when it knocked off Nevada 24-17 in the Hawaii Bowl. That was also the last season the Golden Eagles were ranked, earning a mention at No. 22 after upsetting (7) Houston in the C-USA title game.

The extent of Central Michigan and Tulsa’s history is a home-and-home series they split in 1986-87. The winning team hung 40-plus points on the loser on each occasion. The Chippewa haven’t won a bowl game since edging Western Kentucky 24-21 in the 2012 Little Caesar’s Bowl. For Tulsa, it was the 2012 Liberty Bowl, a 31-17 win over Iowa State.

Memphis and Western Kentucky go way back, playing five regular season games between 1933 and 1956. The 1939 game was played when both schools were members of the Southern Intercollegiate Athletic Association. The Tigers haven’t won a bowl game since 2014 when they beat BYU in double overtime in the Miami Beach Bowl.

Previous editions:  From 1952-55 the Poinsettia Bowl was a title game between the West and East Military Service champions, each representing a fort or base. Fort Ord, a former Army base near Monterey, Calif., won two of the four games.

With 77 previous meetings, BYU and Wyoming have more history than any other matchup this bowl season. The two schools shared conference affiliation from 1922-37 (Rocky Mountain Athletic), 1938-61 (the Mountain States Athletic), 1962-98 (the WAC), and 1999-2010 (the Mountain West). They also met in the 1996 WAC title game, BYU won 28-25. The Cougars have won seven straight over the Cowboys. This is the FIRST ever non-conference game between the two.

BYU has dropped three straight bowl appearances, last beating San Diego State in the 2012 Poinsettia Bowl. For Wyoming, it was the 2009 New Mexico Bowl, a 35-28 win over Fresno State in double overtime.

The San Diego State vs. Houston is by far the best matchup and is even better than many of the lower tier bowls played later. BYU vs. Wyoming has some modest degree of appeal. The rest of the bowls are certainly representative of the bowl inflation of the past 20 years. No name teams playing other no names in half empty (or worse) stadiums with nothing on the line-a bit like getting a participation award for playing 4th grade soccer at the end of the season pizza party.

The new orleans bowl should be renamed the UL/Lafayette bowl since they seem to be a constant presence -hoping that the Rajun Cajun fans are interested enough to drive to the game, buy lunch, see the game and drive home without the need for a hotel stay. A nice way to end the season for a couple SEC doormats.

This is great stuff!