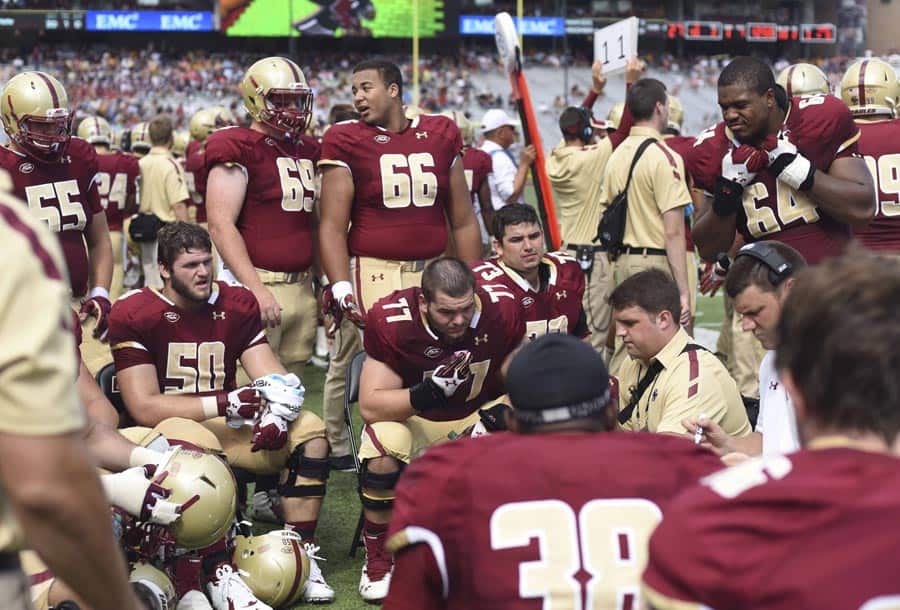 The Boston College Eagles are set to add UConn and Wagner to their future football schedules, according to a report by AJerseyGuy.com.

Boston College is closing in on a deal to host the Wagner Seahawks at Alumni Stadium in Chestnut Hill, likely on Sept. 10, 2016. The game would be the first ever meeting between the two schools.

The Eagles are also set to resume their series with UConn with the first matchup on November 19, 2016 at Alumni Stadium. BC would then travel to face the Huskies at Rentschler Field in East Hartford Nov. 18, 2017.

UConn will then travel to Boston College again in 2022, and then BC will return the trip to East Hartford in 2023. Dates for the four games were confirmed and reported by The Hartford Courant.

Boston College and UConn have met 12 times on the gridiron. The Eagles lead the series 10-0-2 and have nine straight dating back to 1912.

The addition of UConn and Wagner would complete Boston College’s 2016 football schedule. The Eagles are also slated to visit UMass (at Gillette Stadium) on Sept. 17 and Buffalo on Oct. 1. BC was previously slated to host UMass, but will now visit as a concession for the Minutemen replacing a previously scheduled game with UConn.

Boston College will also reportedly add two additional games to their series with UMass. The two teams are currently scheduled to meet on Sept. 17, 2016 at UMass and Sept. 1, 2018 at BC. According to reports, the two new games will be played in the early 2020’s

I thought BC said they wouldn’t play UConn out of conference teN years ago.

The people at BC who said that ten years ago could only promise BC wouldn’t play someone else under their watch. They had no say, and have no say today, about who BC would or wouldn’t play after they were gone.

BC, or any other college, can’t “say” anything about what the school will or won’t ever do. They have no control over what their successor may say.

About time this happen. Could the next step be UConn to the ACC?!? (Maybe the B1G knows something we don’t!)

Maybe just maybe Boston College has buried the hatchet with Uconn over the lawsuit to try and keep BC in the Big East. It’s too bad they couldn’t have decided to forgive them when the ACC was actively seeking a replacement for Maryland. Uconn could be sitting comfortable in the Big East, Louisville and Cincinnati would be in the Big 12 (maybe for the 2014 season but surely in the 2015 season after the whole title game debacle with TCU/Baylor).

Not going to happen. The more likely scenario is Notre Dame goes all in after the current NBC contract if Navy joins the ACC for football only. That protects the annual Notre Dame-Navy matchup. UConn doesn’t have the same drawing card. They have no rivals. They shouldn’t have joined the lawsuit against BC, or they’d have an annual game with BC already…. which would have been their angle into the ACC.
.
At least that gives UMass an opening to fill the hole in the American. An annual UMass/UConn rivalry would bring back the way New England used to be….

@shep dude wtf are you smoking!? UConn and UCF are not rivals

according to UConn they are lol http://www.sbnation.com/college-football/2015/10/10/9494275/uconn-ucf-rivalry-trophy-conflict-mean-girls