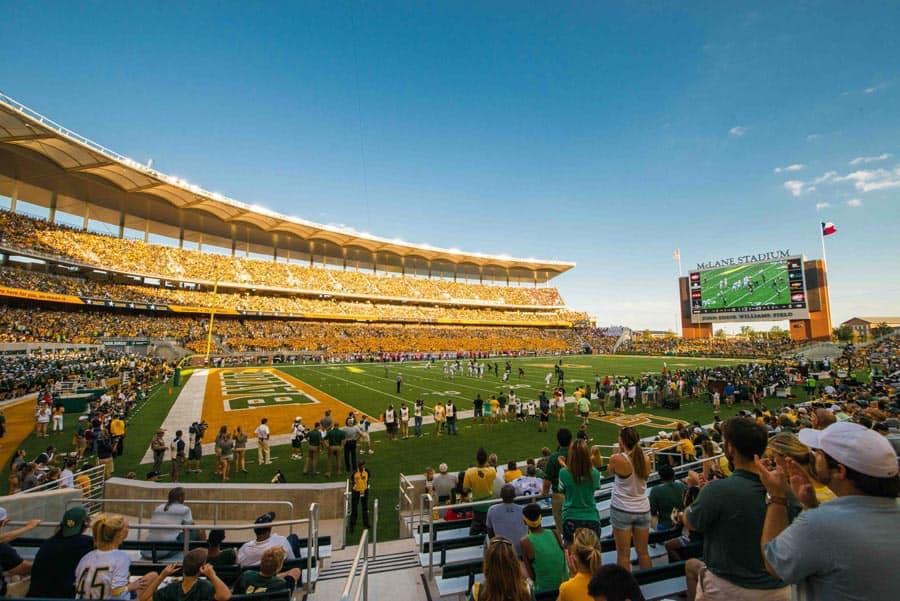 The Baylor Bears and the Utah Utes have scheduled a home-and-home football series for 2023 and 2024, the two schools announced today.

Baylor will host Utah at McLane Stadium in Waco on Sept. 16, 2023 to kick off the series. The Bears will then travel to face the Utes at Rice-Eccles Stadium in Salt Lake City on Sept. 14, 2024.

Provided the two schools don’t meet in a bowl or playoff game, the 2023 contest will be their first-ever meeting on the football field.

“We are excited to begin a football series with Utah,” said Baylor Director of Athletics Ian McCaw. “The Utes have enjoyed considerable success on the national level including five 10-win seasons since 2003.”

Baylor, which has drawn criticism for the overall weakness of their non-conference opponents, now has two teams from a Power Five conference lined up. The Bears are also slated to play Duke in 2017 and 2018.

Back in February, Baylor announced the addition of a three-game series with Louisiana Tech for 2020-22. Other future opponents for the Bears include Rice, SMU, UTSA, and four FCS schools.

Utah’s slate of non-conference opponents from 2016 onward is similar to Baylor’s. The Utes have games against BYU, Northern Illinois, San Jose State, and four teams from the FCS on the books.

Did Utah pretend to be Weber State to get Baylor to agree to these games?

Baylor should move it’s match-up with UTSA in 2019 to 2020 and get some P5 opponents between 2019-22 if they want to be taken seriously and have a better shot of trying to make a run at the play-offs let alone a national title because games versus Rice, Lamar, and at SMU aren’t going to cut it unless they can go undefeated and even then is their Big12 slate enough to battle test them enough to take on the elite teams that make the play-offs?

Maybe they could schedule some for the year 2525. If man is still alive. ;)
At least the message is finally being heard in Waco… play a tougher schedule, get a greater reward. And we don’t mean Lamar and Incarnate Word.

A miracle Baylor is actually going to play a P5 OOC or did the AD make a mistake and think Utah was still Mountain West. Baylor haven’t played a P5 OOC since 2009 and don’t until Duke in 2017/2018. They don’t in 2019 with the powerhouse schedule of Incarnate Word, UTSA and Rice

Don’t worry, guys. It’s still almost a decade away from happening. Still plenty of time for Baylor to cancel.

unfortunately this is true haha

I this this is an intriguing matchup, but we have to wait 8 years for it. I agree, Baylor has to schedule better P5 OOC games, if they want to be taked seriously.