Baylor and Arkansas could play in Houston in 2019 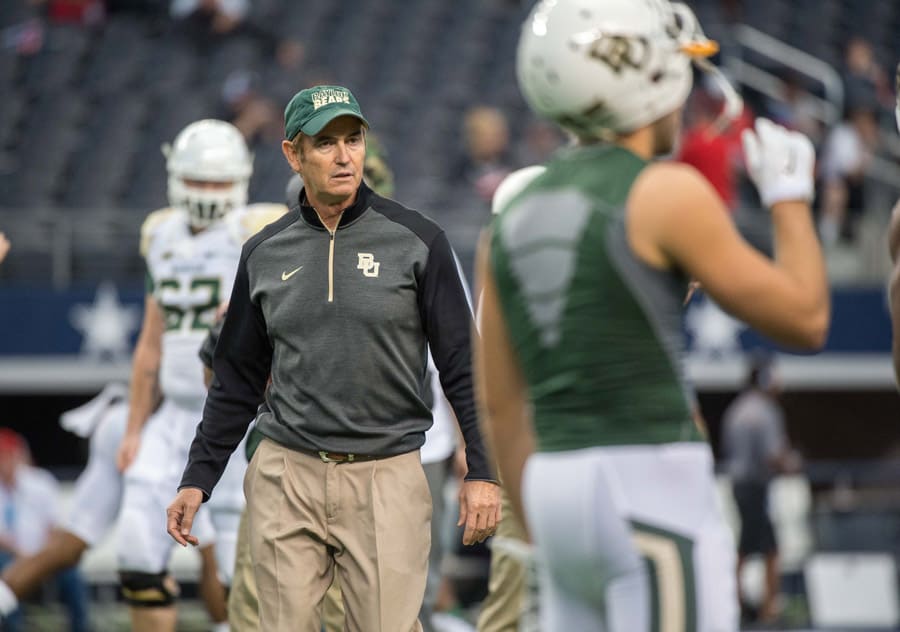 Since Baylor missed out on being selected to the College Football Playoff, the Bears have been looking at strengthening their non-conference schedules.

Baylor does play nine conference games in the Big 12, which is one more than the ACC, SEC, and Big Ten play (Big Ten moves to nine in 2016). However, their current non-conference lineup is littered with teams such as Rice, SMU, UTSA and numerous FCS schools.

The Bears do have a future home-and-home series scheduled with Duke and recently added one with Utah and a three-game series with Louisiana Tech.

Those moves are a step in the right direction, and today news came out that Baylor is continuing their push for better non-conference opponents.

At a luncheon with the Touchdown Club of Houston this afternoon, Baylor head coach Art Briles indicated that “there’s a chance” they could play the Arkansas Razorbacks in Houston in 2019.

During Q&A at Houston Touchdown Club luncheon, Art Briles said “there’s a chance” Baylor could play Arkansas in Houston in 2019.

Baylor and Arkansas first met on the gridiron in 1904 and have played a total of 70 times. Three of those matchups came before the two schools were members of the Southwest Conference.

The Razorbacks currently lead the series 35-33-2, but the two haven’t played since Arkansas final season in the SWC in 1991.

As College Football Talk indicated earlier today, there would need to be some schedule shuffling in order for Baylor and Arkansas to play in 2019 in what would most assuredly be a season-opening game.

Baylor’s 2019 non-conference slate is currently full with Incarnate Word (Aug. 31), UTSA (Sept. 7), and at Rice (Sept. 14). The easiest move here would be to move Incarnate Word to another season or pay the cancellation fee.

Arkansas is currently scheduled to host Michigan to open the 2019 season in the second half of a home-and-home series that begins in Ann Arbor in 2018. This game could simply be pushed back a week or two the same season.

Whatever happens, it would be great to see Baylor take on an SEC team in the regular-season.

Talk about a non-article…..Baylor could POSSIBLY play Ark “5” fb seasons from now.

Sounds like they plan to boot Rice from the schedule in 2019. That game is in Houston according to the schedule. Makes sense, neutral site in the same city they wanted to be in.

Baylor shuffling that schedule? No way. It won’t happen unless they replace Rice with Houston Baptist which I can see them playing in Houston.

Whoa, I hope they don’t lose Incarnate Word. That looks like a tough game!

Theres no way Arkansas schedules Baylor and Michigan in the same season.

Id love to see Baylor beatup Arkansas. But, its hard to believe Arkansas would want to play Baylor and Michigan in the same season, then having to play their conference games. And Id also love for Baylor to upgrade the sschedul. But in the Big 12, you play 9 cconference games. Meaning one game more than them other schools playing 8 w/3 weak games, and 1 power cconference out of world oopponent. So Big 12 schools actually play 10 power 5 games when adding a out of cconference school. What other school/s besides in the Big 12 are doing that?
#BU#B2BBIG12CHAMPS
#FOOTBALLU
#NATTYORBUST

Go Hogs! We would all like see the Baylor Bears and the Arkansas Razorbacks play. Not just one game, lets go at it home and home. As I said Go Hogs!

Would be excellent for both teams non conference SOS, I’d like to see home and home series. Both Waco and Fayetteville are hostile atmospheres, and would probably be sell out on both ends