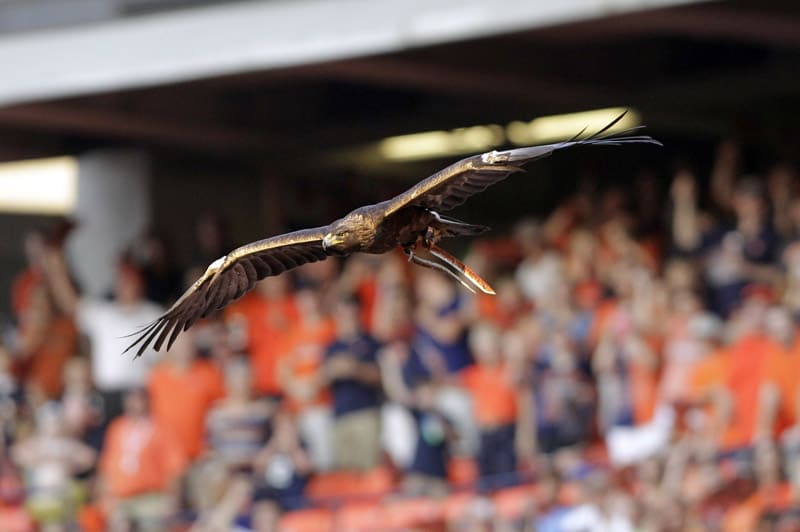 Tigers vs. Tigers! ACC vs. SEC! The Auburn Tigers and the Clemson Tigers will square off in a home-and-home football series in 2016 and 2017, both schools announced today.

The series with Clemson series fulfills the non-conference schedule mandate for Auburn for both the 2016 and 2017 seasons. As you probably know, the SEC has mandated that each member play at least one power five non-conference game beginning in 2016.

The ACC issued a similar strength of schedule mandate, but it doesn’t begin until 2017. Clemson already has their mandate fulfilled each season due to their annual rivalry game against the South Carolina Gamecocks.

Auburn is slated to host Arkansas State in 2016, and the Clemson contest is their first announced game for the 2017 season.

Good for Clemson. They continue to have the sort of OOC schedule which is attractive to their fans and one which means when they put together the great season they can have the quality wins and are ready to play in big games.

LETS GO! Love playing SC every year as well as home and homes with UGA and AU. Gonna be a fun trip.

Clemson should’ve been invited to the SEC back in 1990. GO TIGERS!

Maybe they didn’t want to be. At that time, the ACC made more money than the SEC because basketball carried a higher proportion of TV value than it does now, and of course the ACC had excellent basketball. I would even go so as far as to say, in that window of time, ACC basketball was more dominant in that sport than SEC football was in that sport, at that time; the SEC actually went 12 years between national titles (Georgia in ’80 to Bama in ’92), whereas the ACC was 7 NCG’s for hoops and won four in that same span. Even in football, Georgia Tech was helping carry the load alongside Clemson with its 1990 national title, and FSU’s entry made the ACC even more appealing for Clemson to want to stick around. Besides, Clemson loved being, by and large, the bell cow of ACC football back then. They had already been in the league for nearly 40 years. They already were playing SC every year and played two others, UGA and Auburn, pretty frequently. In other words, they were getting a lot out of the SEC wiyhout even having to be in it. Knowing what they knew then, I wouldn’t have blamed Clemson at all for turning down an SEC invitation at that time if one had come.

Three comments. Clemson has set up a super hard OOC with two top tier P5 schools the next four years. South Carolina is one, the Georgia this year, Notre Dame next year, and then Auburn in 2016-17. These give the Tigers a great chance to build a resume for Playoff consideration if all goes right. This looks like a Southern Cal type of schedule mentality.

As for Auburn, this is another benefit of the SEC and ACC requiring 9 P5 games. Fans really win with this rule everywhere. Only about a half dozen P5 schools are not scheduling a P5 OOC in 2016, sticking to 9 conference games

We are down to just a handful of SEC and ACC schools who do not have a P5 OOC in 2016. BC, Ole’ Miss, Miss St, and Missouri. Two schools outside these conferences have open slots and look like possible opponents in Arizona and K State. I suspect BC will wind up playing one of the Mississippi schools in a 2016 and 2017 series. I’d love to see K State and Missouri play at Arrowhead in 2016; that would be highly anticipated by both schools as it was always the second most important game for both after the KU game. Anyway that is my guess and hope.

Clemson has to schedule 2 P5 OOC out of necessity…B12, B10, P12 all have or will play 9 game conf schedules plus a atleast 1 P5 OOC. They will all play atleast 10 P5 opponents, To also get to 10 P5 opponents Clemson needs to schedule 2 OOC. Also the ACC is not highly regarded so the only top opponent they play annually in conf is FSU as Vtech and Miami have fallen into mediocrity. Nobody knows if UL will be good or be like WV who went from top school in the BE to canon fodder in the B12

That’s not all entirely true. Sure, most of those teams (B1G, B12, P12) will play a P5 school out of conference, but there will some who dodge them.

Baylor seems content to play AAC, C-USA, and Sun Belt schools from the state of Texas. Expect them to have some combination of Houston, SMU, Rice, UTSA, UTEP, North Texas, Texas State, and FCS teams. Maybe the occasional home game against a non-Texas team outside the P5. They’d really be stepping outside their current pattern to play anyone else.

I would be surpised if Purdue, Minnesota, Rutgers, Indiana, and Illinois don’t ever have a year without a non-Big Ten P5 team on the schedule. Same goes for Colorado, Washington State, Utah, and Oregon State.