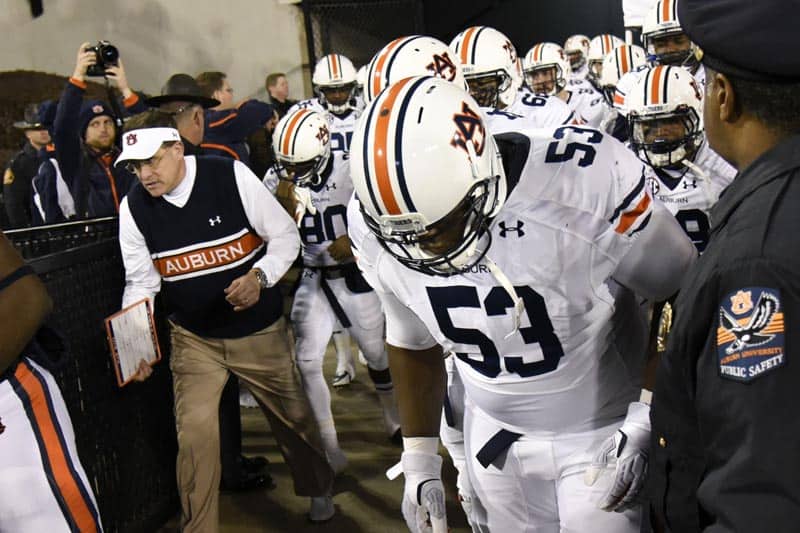 The Auburn Tigers have completed their 2016 non-conference football schedule, the Montgomery Advertiser has reported.

New additions to Auburn’s schedule in 2016, per the Advertiser, are home games against the ULM Warhawks on Oct. 1 and the Alabama A&M Bulldogs on Nov. 19.

Auburn opens the 2016 season at home against the Clemson Tigers in the first game of a home-and-home series that concludes in 2017. The following week on Sept. 10, the Tigers host the Arkansas State Red Wolves.

Earlier today, it was announced that Auburn would host Mercer in 2017. The game is tentatively set for Nov. 18.

Auburn finished the 2014 regular-season 8-4 (4-4 SEC) and will face Wisconsin in the Outback Bowl on Thursday, Jan. 1, 2015. Since UW head coach Gary Anderson has left for Oregon State, the Badgers will be coached by Barry Alvarez.

FBS teams scheduling FCS teams, and the beat goes on!!!

Dang, that’s stepping it up!!! What is Auburn thinking??? Are they just trying to lose every game??? Why don’t they give themselves a chance??? Having all four of their non-conference games at home and then to play the likes of Arkansas State, UL-Monroe, and now Alabama A&M. This is too much to handle. I know A&M has had two consecutive seasons of 4-8 records, but hey they play in the SWAC East, that’s the SWAC EAST, not the West and ULM is just two seasons away from being a .500 ball club. Good Luck if you’re a War Eagle fan, hope you can find some way to pull out a win in ’16.

Really???? And Auburn fans wonder why they need a “Cam Newton” to be taken seriously in the S.E.C.!!!! STOP PLAYING THESE C GRADE TEAMS just to get a win! I’d rather see my team play and lose to a good team than watch a boring win with no offense from the other team. Good job to the Auburn team managers for putting together a exiting and TOUGH line-up for 2016! LOL. Sounds like ole Gus can’t take the heat….Go back to Arkansas St…No, that’s right you’d rather PLAY THEM!

Who are you a fan of? I’m guessing bama? I’m sorry but have you seen who they are playing this year? Christian southern? Ulm? Stfu

After the performance this season (2015) the Warhawks in 2016 look like s formidable opponent for my Tigers…. Starting the season in’16 against the Clemson Tigers will probably be a bummer