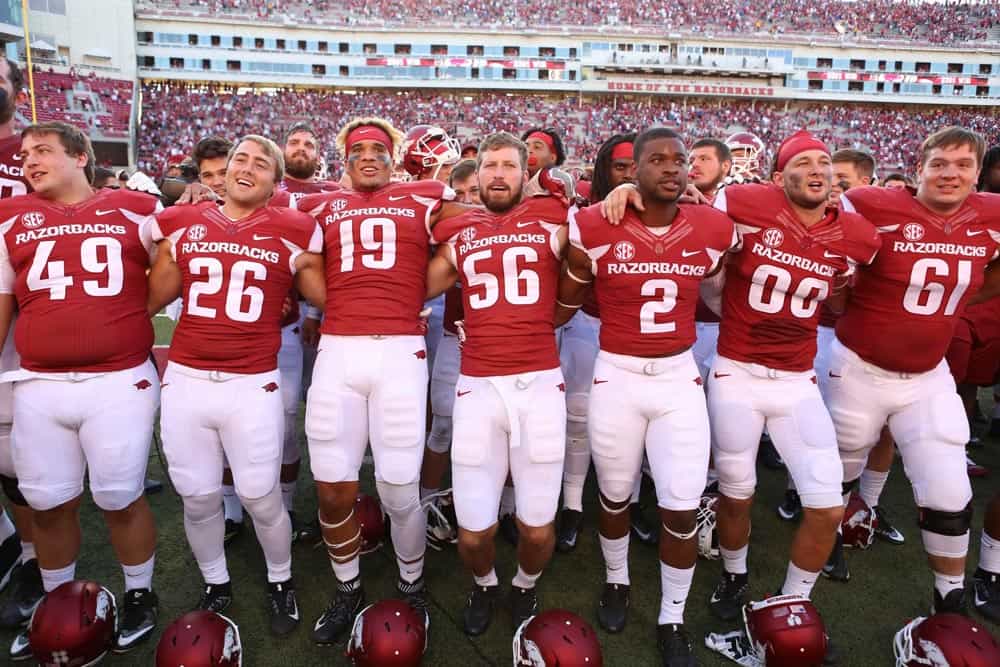 The Arkansas Razorbacks will host the Florida A&M Rattlers in 2017 and the Missouri State Bears in 2021, according to a report by WholeHogSports.

Arkansas and Florida A&M will meet for the first time ever on the gridiron to open the 2017 season on Sept. 2. The game will be played at D.W.R. Razorback Stadium in Fayetteville or at War Memorial Stadium in Little Rock.

Florida A&M, often referred to as FAMU, is a member of the Mid-Eastern Athletic Conference (MEAC) in the Football Championship Subdivision (FCS). Last season, the Rattlers finished 1-10 overall and 1-7 in MEAC play.

The addition of FAMU completes the non-conference schedule for Arkansas in 2017. The Razorbacks are also set to host TCU in Fayetteville on Sept. 9 and will later host New Mexico State on Sept. 30 and Coastal Carolina on Nov. 4.

Arkansas has also added the Missouri State Bears to their 2021 football schedule. The game, also a season-opener, is set for Sept. 4.

Missouri State is a member of the Missouri Valley Conference in the FCS. Last season, the Bears finished 1-10 overall and 0-8 in conference action.

The Bears are the second announced non-conference game for Arkansas for the 2021 season. The Razorbacks are also slated to host the Texas Longhorns on Sept. 11.

Moving Florida A & M to Thursday might begin a tradition; although games in Little Rock are likely done. LR should have been in on a new stadium push in the 90’s. They weren’t. Now, Arkansas has one of the coolest, most unique, most beautiful stadiums in the United States. With 77,000 seats, many of which are premium seats, Arkansas will want to play seven games per year at Don Reynolds Razorback Stadium! In doing so, they will not be forced to complete their schedules with non-majors. San Jose State is coming for 1.5 million. Colorado State is coming for 1.35 million. Tulsa might come for less, due to tradition and proximity. These are respected programs with some history. Missouri State is close by; 120 miles to Springfield. But, like Florida A & M, it’s a practice game. Rumor has it that Oklahoma State may still be open to their “two for one” proposal(two Fayetteville/ one Stillwater), if the schools agree to play home-and-home in basketball. This development would fill a need while creating an additional opportunity! O.S.U. is that required opponent from a power five conference Arkansas must play every year. Every third year the Hogs would have the potential of an eighth home game. Why not use this to set a match up with Nebraska, every third year; at Arrowhead Stadium. This would be a near perfect neutral site! Lincoln is 202 miles to Kansas City. Fayetteville is 236 miles to Kansas City. It would be S.E.C. versus Big Ten. It could be set up to match the Oklahoma state rotation.