Arkansas to play Colorado State in 2018, 2019, will count as Power Five games 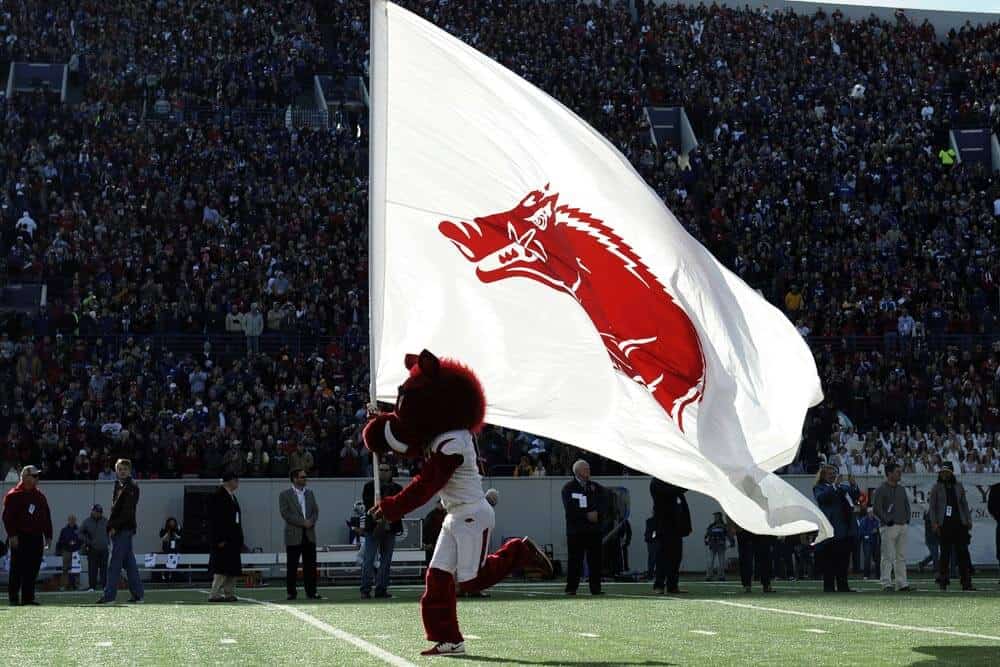 The Arkansas Razorbacks have been in search of a Power Five non-conference opponent for the 2018 and 2019 season after Michigan canceled their series and left the Razorbacks in a pickle.

Apparently unable to find a Power Five team to play in both seasons, Arkansas has received a waiver from the SEC and will be able to count the Colorado State Rams.

Arkansas was already scheduled to host Colorado State on Sept. 14, 2019. Today, that single-game was essentially converted into a home-and-home series, and the Razorbacks will take on the Rams at Colorado State Stadium in Fort Collins on Sept. 8, 2018.

“We are appreciative of the assistance of the Southeastern Conference and Colorado State University in filling the scheduling void created by the cancellation of a home-and-home series with a Big Ten opponent,” Arkansas Vice Chancellor and Director of Athletics Jeff Long said. “Since we received the news of that cancellation this past summer, we worked on a number of scenarios to meet the SEC requirement, but were ultimately unable to find a Power 5 conference opponent at this late date. I would like to thank Commissioner Sankey and the other SEC AD’s for their cooperation with the waiver. Colorado State is an outstanding program with a beautiful new football stadium. We look forward to our series with them in the coming years.”

The addition of a game at Colorado State completes the non-conference schedule for Arkansas in 2018. The Hogs are also scheduled to host Eastern Illinois (Sept. 1), North Texas (Sept. 15), and Tulsa (Oct. 20).

“This is exciting for our football program and for our fans,” said Colorado State head coach Mike Bobo. “Being able to bring an SEC opponent to Fort Collins speaks to the growth of our program and also speaks to the impact our new on-campus stadium is already making. We want to challenge ourselves in our non-conference schedule and also bring those quality opponents to our home field and our fans.”

Colorado State has also completed their non-conference schedule in 2018. In addition to hosting Arkansas, the Rams face Colorado in Denver (Sept. 1), play at Florida (Sept. 15), and host Illinois State (Sept. 22).

Would have preferred that Arkansas play against a winning program, not Colorado State.

BYU or Oklahoma State would have been better options.

Would have expected this type of move from a Vanderbilt, Purdue or Wake Forest. Surprised Arkansas is stooping this low.

I don’t know why it wouldn’t surprise you, have you seen some of the scrubs on Arkansas’ schedule? Didn’t they lose to Toledo a couple years ago?

Matt, since 2003 Arkansas has played Texas three times (scheduled for a fourth time in 2021), USC twice, Texas A&M three times before they joined the SEC, Rutgers twice, Texas Tech twice, and now TCU twice. They had Michigan before they dropped them for Notre Dame and it’s hard to get mad at them for that other than the fact it left Arkansas in a scheduling bind. Some of those games didn’t go so great for them, but they have scheduled multiple P5 schools. Their G5 opponents aren’t any different than most of their peers.

Rutgers, Texas Tech, and TCU aren’t exactly powerhouses at them moment so I wouldn’t lean on those as solid non-conference matchups. Since the SEC only plays eight conference games, SEC teams they really should be scheduling two P5 opponents annually to get their schedule on par with teams from the Pac 12, Big 12 and Big 10. Right now they are still getting away with playing three scrubs every year even with one solid non-conference game and that should hardly pass as a strong schedule. I agree it is not their fault that Michigan bailed on the game, but they put themselves in this position by scheduling an otherwise very weak non-conference schedule.

Rutgers, Texas Tech, and TCU are all P5 opponents. And by the “not powerhouses” logic, anyone who had Michigan State and Notre Dame last year fell into playing a bad team.

TCU was in the top 5 in the country just a few years ago after all.

So, when the Big Ten adds Rutgers they are great when they are the ninth conference game, because you know… they are a power five team and all. But when Arkansas schedules them, they are a weak opponent.

This is exactly why nine conference games don’t matter. When your conference includes the likes of Rutgers, Maryland, Purdue, and Indiana it’s not even close to the schedule teams like Louisiana State, Alabama, Georgia, and Auburn face…

I think it is funny how consistent the SEC supporters blindly support their teams. Arkansas plays E. Illinois, Colorado St, North Texas and Tulsa in their 2018 non-conference. That is dreadful. How hard is it to admit that? Look, as a B10 supporter, I am embarrassed that the conference let in Rutgers solely for the purpose of grabbing a NY/NJ television market for the B10 network. I can admit that. And you are absolutely right, Rutgers is as much of a bye week for B10 teams as FCS teams are to each SEC team. But when you compare the other three games vs. a B10 comparable such as Northwestern (Duke, Akron, ND) or Michigan St (ASU, CM, TBD), its laughable. And sure, go ahead and counter by comparing Arkansas’ schedule to Minnesota. Just realize that when you are making that comparison, you are dragging Arkansas down to the level of Minnesota; which for being the almighty SEC, is not a level your fanbase typically projects for your conference.

We had Michigan scheduled. We just got done with Texas Tech and will finish with TCU this season. Nobody is saying our 2018 OOC schedule is strong. But stop crapping on us because of it.

“Pride cometh before a fall.” CSU might surprise the Razorbacks.

But BYU cannot offer a return game until 2021. I am thinking this was a constraint.

This should leave a decent balance of home and road needs. Though the one and done at Oregon for BYU in 2022 is still puzzling.

I could see BYU being willing…if the game were later in the year. But I don’t know if Arkansas would want to play them in the middle of conference season instead of the usual bodybag game.

Arkansas is totally irrelevant in the SEC-so who cares who they play. THey lost to ULM and a few years ago were swept in a 2 game series by both Rutgers and Fresno State- couple of the worst teams in their own conferences let alone the whole country.

They’ve never played Fresno State. The Rutgers series was pretty bad for them, but they were terrible those two years.

Its a shame Mike Bobo probably wont be there. I have a feeling CSU is gonna have a big year and make him a hot property next offseason.

Hawgs could have scheduled the Gators to a non-conference game. If NC-WF are doing it in 2019.

This is all Michigan’s fault for running out on scheduled games.

Really not that bad, because at least they’re going TO Fort Collins for the ’18 game. It’s an SEC *on the road to a G5 team*!! How rare is that? But seriously, Colorado State is one of the teams that the Big XII-IV+II should have taken in. Adjacent area state, large, growing population base, very large alumni base and history, and built-in rivalry game with a P5 from the PAC. Certainly CSU’s ’18 schedule is not bad now. 2 SEC’s and a PAC game? That’s OOC strength.

As an Arkansas fan, I’d like to see some more road games against G5 schools. Good for college football when P5 teams make those road trips.