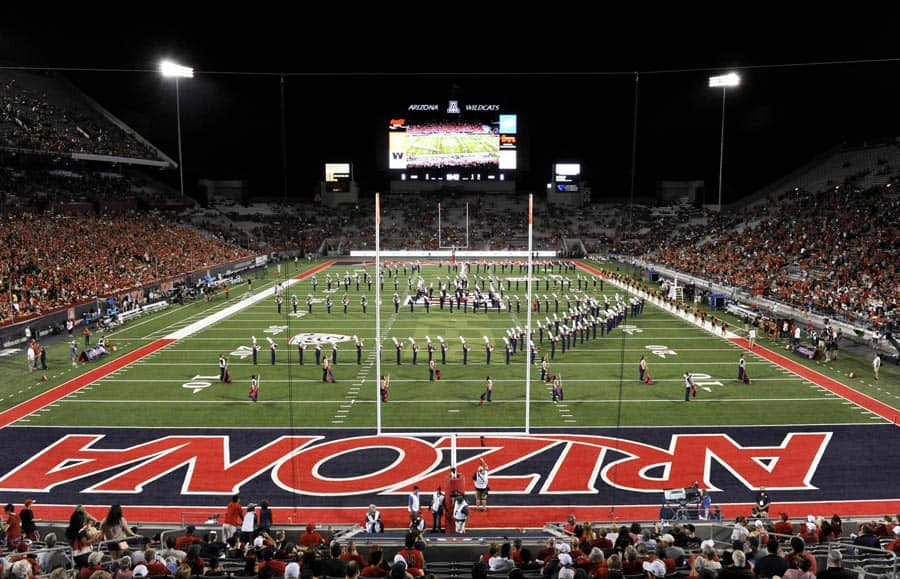 The Arizona Wildcats and the Texas Tech Red Raiders have scheduled a home-and-home football series for 2019 and 2020, the two schools announced today.

Arizona will host the first game of the series at Arizona Stadium in Tucson on Sept. 14, 2019. The Wildcats will then travel to face the Red Raiders at Jones AT&T Stadium in Lubbock on Sept. 19, 2020.

Arizona and Texas Tech have met 32 times on the gridiron, with the last meeting coming in 1989. Texas Tech leads the overall series 26-4-2.

The Wildcats now have two of their three non-conference games set for the 2019 and 2020 seasons. They are also scheduled to play a home-and-home series against Hawaii, with games set for Honolulu in 2019 and Tucson in 2020.

Texas Tech is only the second opponent from a Power Five conference on Arizona’s future schedules. The Wildcats are also set to face Mississippi State in 2022 and 2023.

Arizona is the first announced non-conference opponent for Texas Tech for the 2019 season and second for 2020. The Red Raiders are currently slated to host Wyoming in 2020.

The Red Raiders now have three Power Five opponents lined up for future seasons. Texas Tech visits Arkansas this season and squares off with Arizona State in a home-and-home series in 2016 and 2017.

Most of those meetings came between 1932 and 1956 when both schools (then known as Arizona State Teachers College-Tempe and Texas Technological College) were members of the Border Intercollegiate Athletic Association.

That’s some information right there.

Thanks Bill (the one that’s commenting for years; not the newbie), but the college you refer to is now known as Arizona State. University of Arizona has always been known by its current name. However, you are correct in stating that both were members of the Border Intercollegiate Athletic Association and that most (56.25% to be exact) of those games between the two came during that time.

On a completed unrelated note, is there a reason you attach ” (the one that’s commenting for years; not the newbie)” to your name when commenting. I rarely see any other Bill commenting, and wouldn’t an initial suffice better? Just saying…

“Texas Tech is only the second Power Five opponent on Arizona’s future schedules. The Wildcats are also set to face Mississippi State in 2022 and 2023.”

BYU is a Power Five opponent,* and they are also on Arizona’s future schedules.

*Sources: the ACC and SEC

They are considered Power Five by those conferences for scheduling purposes only. They aren’t a member of a Power Five conference, which is what I was looking in in terms of future opponents.

Washington has only 2 power 5 teams OOC teams on their future schedule, Michigan in 2020/2021 and a very bland 2 games with an unattractive Rutgers in 2016/2017. I’d tae Arizona’s OOC schedules any day as they are not filled with 8 Big Sky games over the next 7 years like former power Washington has scheduled. These are not your Don James schedules or teams.

Kevin, I agree with Hank. I get what you are saying, but the way it’s worded in the article may be misleading or ambiguous. Perhaps you should reword to: “Texas Tech is only the second OPPONENT FROM A Power Five CONFERENCE on Arizona’s future schedules. The Wildcats are also set to face Mississippi State in 2022 and 2023.”

Art Briles looks at a series like this and feels compelled to schedule another game with Incarnate Word.

Maybe Art will look overseas and schedule Incarnate World. Baylor is the joke of the country now in scheduling.

It was updated with info from the school’s release.