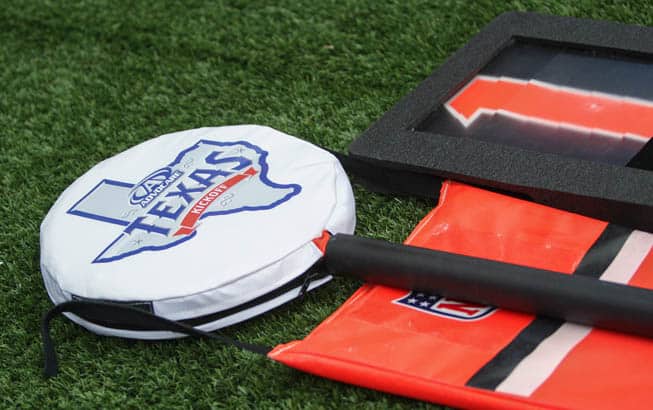 The Arizona State Sun Devils and the Texas A&M Aggies will meet in the 2015 AdvoCare Texas Kickoff, ESPN and the schools officially announced this afternoon.

The game will be played at Reliant Stadium in Houston on Saturday, Sept. 5, 2015 and an ESPN network will televise the game to a national audience. Arizona State and Texas A&M have never met on the gridiron.

“Playing Arizona State is a wonderful opportunity to compete against one of the best teams in the Pac 12,” said Eric Hyman, Texas A&M Athletics Director. “We are excited about the matchup in Houston and especially playing in Reliant Stadium with such a large number of our former students in the area.”

“We are excited to participate in this unique college football event in the state of Texas against an SEC opponent in Texas A&M,” said Steve Patterson, Arizona State Athletics Director. “Our fans and alumni experienced a fabulous time in Dallas with the Notre Dame game at AT&T Stadium earlier this year and we are excited to provide another similar opportunity for our fans, alumni and student-athletes. Todd Graham and his coaching staff recruit the state of Texas and this can only serve to enhance that effort.”

In order to play in the game, Arizona State changed the dates of their other two non-conference games in 2015. The Sun Devils were previously set to open the season vs. New Mexico on Sept. 5, but will now play them on Sept. 19.

ASU also changed the date of their game against Cal Poly. The Mustangs will now visit Sun Devil Stadium on Sept. 12 instead of Sept. 19. Arizona State’s 2015 non-conference schedule is now complete with today’s addition of Texas A&M.

In the inaugural AdvoCare Texas Kickoff in August, Oklahoma State defeated Mississippi State 21-3. The 2014 contest will feature LSU vs. Wisconsin.

Solid early season matchup that should be interesting. GO DEVILS!