The Anatomy of a CFB Playoff Schedule 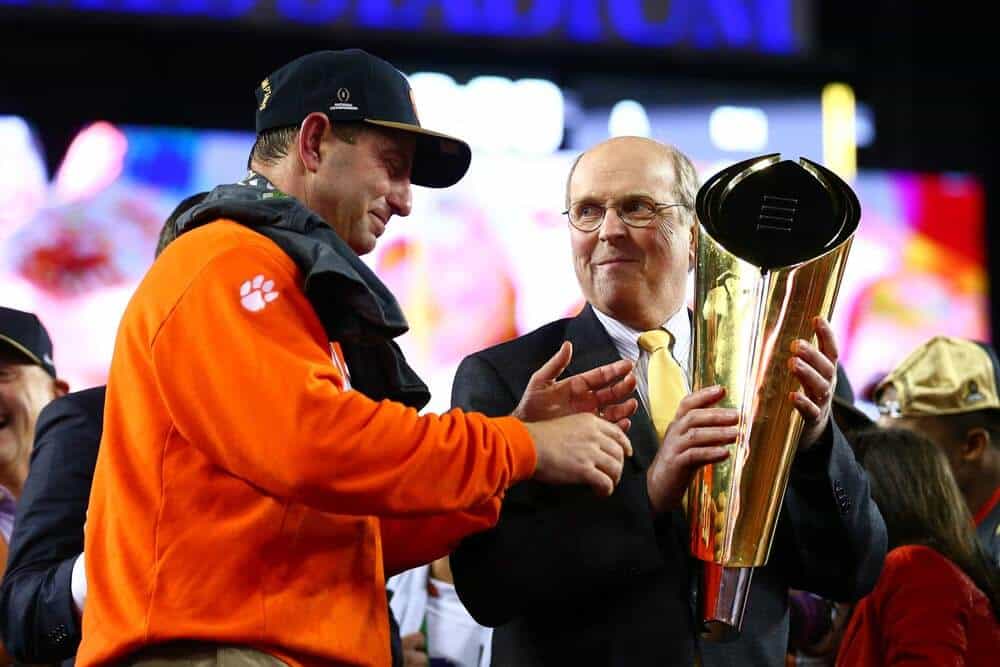 What can we learn from the 12 teams who ascended to the College Football Playoff in its first three seasons?

From a scheduling standpoint, each of the dozen reached the end of the regular season with a 12-game resume to present to the Playoff committee. In each case it was enough to earn them a coveted place in the bracket.

It illustrates, absolutely, how important the schedule is in today’s college football climate. Teams can finish the season with the same record, but the one who has the best perceived set of opponents will ultimately be given the opportunity to play for a national championship.

With 12 teams in three years, we now have enough data to begin to forecast what a Playoff-worthy schedule looks like. Any common threads among the 12 teams sends a clear message, “This is what the committee is looking for.”

These are the unofficial guidelines to “scheduling your way to a CFB Playoff berth.”

I. You MUST schedule a Power school out of conference play.

100% of the 12 teams who earned slots in the first three CFB Playoff brackets played a Power team in non-conference play. It is one of only two absolutes among the dozen Playoff-worthy slates.

II. Schedule your bye week for Week 6 or later.

Of the 12 previous Playoff schools, nine (or 75%) had at least one bye week that fell during or after Week 6 of the season.

III. Schedule no more than two road games in a row.

The other absolute in scheduling for a Playoff, 100% of the teams sampled played a maximum of two consecutive road games during the regular season.

The flip side of the third commandment, eight (or 67%) of the 12 Playoff teams scheduled at least one home stand lasting three weeks or more.

In 2015, Michigan State enjoyed a stretch of four home games from Sept. 12 (Oregon) to Oct. 3 (Purdue) – making the Spartans the Playoff team with the longest homestretch in history.

V. There is no need to double-up on non-conference power opponents.

While the first commandment is absolute, schools don’t need to push the boat out too far if they choose not to. Of the 12 Playoff teams, only three (or 25%) scheduled more than one Power team out of conference play. The exceptions are Clemson (two in both 2015 and 2016) and Florida State (three in 2014).

Even though FBS teams have won roughly 90 percent of the 240 games they’ve played vs. FCS schools since the CFB Playoff kicked off in 2014, scheduling such an opponent isn’t frowned upon.

Eleven of the 12 playoff teams (or 92%) played seven home games the year they made the playoff. The only exception was Oklahoma in 2015, which played six games at home in Norman, five on the road, and then its standing date with Texas at the Cotton Bowl in Dallas.

What’s worth noting is that five other Playoff teams, like the Sooners, also played a neutral game the year they made it to the bracket. But, each of these—Alabama (2016, 2015 and 2014), Florida State (2014) and Ohio State (2014)—added seven home games and only four road dates to their neutral game.

VIII. Schedule a non-conference power opponent that has a good chance of being ranked.

A proviso to the first commandment, don’t just play any non-conference power opponent, play a good one.

IX. Schedule a school from any Power conference with the exception of the ACC

To further pinpoint who to play out of conference, pick a school from the Big 12, Big Ten, Pac-12 or SEC. Don’t pick the ACC.

Though it sounds bizarre, of the nine non-ACC teams that have made the Playoff, only one played an ACC team during the regular season. That means 89% of the non-ACC schools scheduled an opponent from another Power conference.

The only exception was (8) Ohio State in 2014, which fell memorably to unranked Virginia Tech in a Week 2 shocker in Columbus.

The final guideline expands on the fifth commandment. Basically, if you’re not an SEC member, you can’t get away with playing only eight conference games and still make the Playoff.

Since Alabama is the only SEC program to ever make the Playoff, we’ll assume that in most cases, the committee would give say Georgia, LSU or Florida the same pass it’s given the Tide. The assumption is that the SEC members’ in-conference schedule is so difficult that it makes up for the fact that the entire league plays one fewer Power team than the rest of the country (minus the ACC).

The ACC has never “gotten away” with this because the members who have made the Playoff all played an extra Power opponent out of conference during that season. Therefore, the committee has never been tested on the question. The Big Ten, though, did avoid being left out in 2014 (Ohio State) and 2015 (Michigan State) before it expanded its conference slate to nine games in 2016.

No matter how you slice it, seven (or 58%) of the 12 Playoff teams played 10-plus power opponents in the regular season the year of their Playoff berth. Three of five exceptions were Alabama (2014, 2015, and 2016), which not only got a pass, it earned the number one seed two of the three years.

Even though FBS teams have won roughly 90 percent of the 240 games they’ve played vs. FCS schools since the CFB Playoff kicked off in 2014, scheduling such an opponent isn’t frowned upon.

Another well written peice. Thank you Amy! Love being able to read to read your articles during this long, long off season!!

Thanks Amy…great insight and great article – when you control your schedule as to who, when, where you play is an advantage.