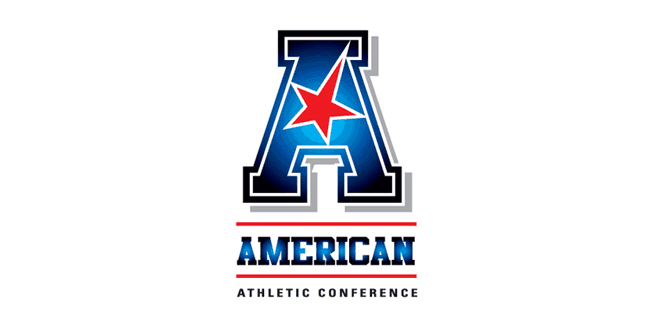 The American Athletic Conference has released their new primary logo ahead of the 2013 football season. Their website, which will be located at TheAmerican.org, launches on July 1.

“It’s a bold look,” commissioner Mike Aresco told USA Today’s Dan Wolken. “Obviously this is a media world we live in, and we wanted to make sure we had the kind of mark that would be distinctive and would make an impact when people saw it. We wanted it to be something people would like and remember, but the notion really was to make it as simple as possible but also strong.”

Wolken also obtained a sneak peak at one of alternate horizontal logos for The American (pictured below). More alternate logos will be released today.

The American Athletic Conference, which is the new name for the Big East, announced their new identity on April 3. Instead of using the acronym AAC, the conference will instead use “The American” as its brand.

For the 2014 football season, The American will have 11 members after the departure of Louisville and Rutgers and addition of three schools: Cincinnati, Connecticut, East Carolina, Houston, Memphis, SMU, Temple, Tulane, Tulsa, UCF, and USF.

Navy joins in 2015 in football only, and at that time The American will split into divisions and have a championship game hosted by the highest-rated division champ.

So I made a funny on Twitter and Deadspin picked it up.

The American logo looks like the Arizona Wildcats logo drank a Heineken.

It’s a tribute to the WFL’s Birmingham Americans. How appropriate.

Not that bad, generic and the Arizona/Heineken blast is accurate, but not that bad.

I like the logo. The Arizona/Heineken wasn’t really a “blast” but more of a satirical observation. Looks like a combination of the two logos.

These guys should have all stayed in Conference USA. Without the combined strength of of Southern Miss, Lousville, and E.carolina, this is nothing more than a Division II class conference.

How does that conference get an auto bid with its collection of schools for 2013?