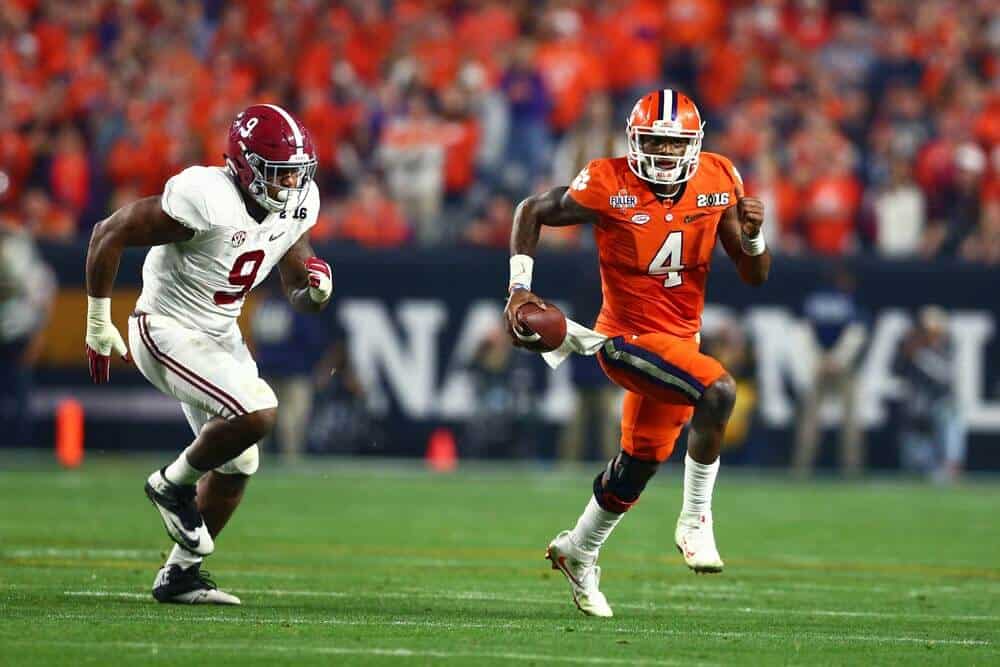 The Alabama Crimson Tide will face the Clemson Tigers in the 2017 College Football Playoff National Championship.

The game is set for Monday, Jan. 9, 2017 at Raymond James Stadium in Tampa, Florida and it will be televised by ESPN at 8:30pm ET.

Alabama, the top seed in the College Football Playoff, defeated the fourth-seeded Washington Huskies 24-7 in the Chick-fil-A Peach Bowl in Atlanta.

The Crimson Tide also won the 2016 SEC Championship Game and head into the College Football Playoff National Championship undefeated at 14-0.

Clemson was the No. 2 seed in the playoff. The Tigers dominated and shutout the No. 3 Ohio State Buckeyes 31-0 in the PlayStation Fiesta Bowl in Tempe, Arizona.

Clemson, the 2016 ACC Champion, enters the National Championship game 13-1. The Tigers have won four straight after being upset at home by Pitt 43-42 on Nov. 12.

The 2017 title game is a rematch of the 2016 College Football Playoff National Championship. Alabama beat Clemson in that game 45-40 in Tempe.

It’s interesting that right after the victory by Bama last year between these two teams, ESPN was already talking about a rematch for 2016 for the championship again between Bama vs Clemson & they were right. Once again you have ACC vs SEC & the same teams in it back to back years, that is pretty remarkable.
Washington did all they could but seriously no one gave them a chance to win, clearly see why. Bama plays their best against the best.
Can’t believe The Ohio State laid an egg & got shutout, 1st time in 15 years & 194 games under Urban Myer.
My hat goes off to the Buckeyes & Huskies, they had great seasons.
I’m honestly not sure who will win this game, Bama dominated all year with a couple of struggles with Ole Miss & LSU. Clemson seem to struggle most of the year but look crazy good now.
Clemson is 2-0 vs SEC & Bama is 2-0 vs Pac-12 this year.
Not sure if ESPN is happy about this, being that you have two east schools playing in Tampa, I know last year the ratings were not all that hot.
I know that Bama is the most hated team in America right now & people wish them to go away or get beat for a change, I don’t. Roll Tide & Go SEC!

They had multiple possessions starting at their 40+ or better and still only finished with 17 offensive points. Did Washington’s D really play that well, or was Kiffin distracted? Without JK Scott flipping the field every possession this game is different, even with Washington’s anemic offense.

Bama’s D is obviously the best in the country bar none, but can it hold Deshaun Watson and Clemson’s O to 17 points or less if they cannot count on the O to score? Clemson’s D is better than UDub’s.

Lots of intriguing angles to this game. Hopefully it’ll be a good one.

The depth and scope of your analysis is quiet profound and is why SEC fans get trolled on every website with their, “SEC! SEC! SEC!”.

The SEC went a whopping……

6-9 in OOC games vs. P5 opponents during the regular season.

Come back when you have something interesting to say about the game; player match ups, coaching changes, philosophies, etc.

Your SEC chant has gotten old, tired and considering the record this season outside of the, “SEC! SEC! SEC!” quite pathetic.

I hope ‘Bama gives Clemson a better game than the #3 team from the Big10 did….

The Big Ten is 0-2 in the last two seasons in the College Football Playoff, losing by a combined 69-0.

How about we stop inviting teams from the Big Ten to the CFP until they prove they are actually worthy? Winning the Big Ten anymore is meaningless.

Besides ‘Bama no one else in the SEC is worthy, either.

Love watching 8-4 teams like Auburn get their teeth smashed in a New Year’s Six game when they have a whopping 5 P5 wins, with triumphs over Alabama A&M, University of Louisiana Monroe and Arkansas State to pad their record.

Combining Bowl records and Regular Season OOC games the SEC is 11-16 against P5 opponents. Well, 10-16. That Mississippi State 17-16 triumph over a 6-6 MAC team with a blocked field goal in the final seconds actually counts as a bowl win……

The Big Ten has lost five or more bowl games each of the last seven years. They’ve only won more bowl games than they lost twice in the time the SEC has dominated the college football landscape. And they have capped that horrible performance by going two years without scoring a single point in the CFP.

Dominance is never established in a weekend or a season… it’s established over a decade. And the SEC has established dominance over the rest of the college football world.

But then again, you must not know what the words “best” and “dominant” mean.

Alabama Crimson Tide!! Roll Tide. Because we’ve got the best team in the nation, with the best winninest coach, and Rookie Quarterback in Hurts.Because He WILL come back to HURT you at the end.

F… ESPN for whoring the TV rights. Radio, as you don’t own!

What a dominating season, SEC fanboys.

No Natty from your ONLY good team.

Look forward to the next eight months of whining.

I have a problem with Alabama boasting that they have the number one defense in the country. It is been say it that it was the best one they ever had. And according to one of their defensive backs the last year defense wasn’t that good and this year they will supposed to show us who the real Alabama is. Well the real Alabama defense got spotted 14 points and couldn’t hold a mediocre Clemson team that almost lost four games this year. and allowed one quarterback in two games to throw almost 900 yards on them. Please could somebody please tell the real Alabama to show the hell up we’re still waiting.

And by the way let’s talk about the plain truth .Alabama people need to get your head out of the sand. I will help you if you let me but you have to ask for help because you people need help. Alabama did not dominate the whole year the truth is they played a washed-up has been sorry sec schedule. None of which is really good probably 8 and 5 is the best record of the teams and they struggle with Chattanooga Tennessee team. Hey look I’m trying to help you people you have a disease perception of reality Clemson has beat every major team in the SEC beat LSU beat Auburn beat Georgia beat Alabama not one team in the SEC have beat all of the ACC teams. And you will lose to Florida State come this September. Stop talking about what you used to be That’s History start thinking about who your new daddy is going to be the ACC until you prove yourself we going to always be your daddy.

That’s exactly what I thought. The tide went out to the Sea and stop rolling. Hey how do you eat a elephant one bite at a time. I don’t like it when people run their mouth and when it’s time to put up they shut up.’ Oh excuse me roll damn tide roll.