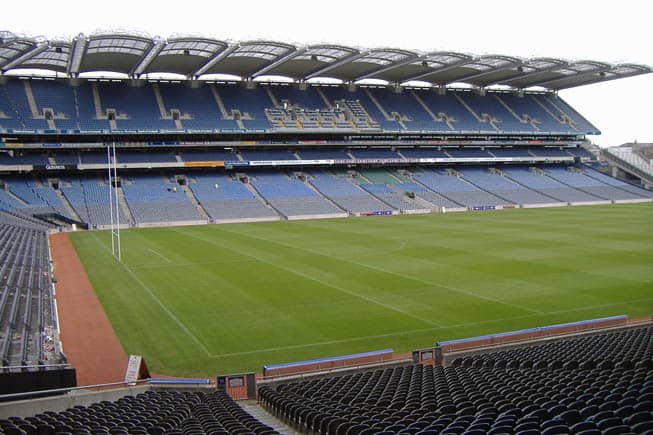 Alabama, Boston College, and Notre Dame are all being “considered” to play future football games at Croke Park in Ireland, The Score has reported.

Those games will reportedly be played in 2016 and 2018. A 2014 match-up has already been set and will feature the Penn State Nittany Lions versus the UCF Knights, The Irish Times reported earlier today.

The 2014 Penn State-UCF matchup will be officially announced by the two schools on Sunday, July 14.

Rumors of a possible Penn State game in Ireland surfaced back in February when Nittany Lions head coach Bill O’Brien announced that they were “definitely” looking into playing in Ireland.

Croke Park is the home of the Gaelic Athletic Association (GAA). The last American football game played there was on July 27, 1997 and it featured a match-up between the Pittsburgh Steelers and the Chicago Bears of the NFL.

Notre Dame and Navy played the first and only college football game at Croke Park in the Shamrock Classic in 1996.

Notre Dame also played a game in Ireland last season against Navy at Aviva Stadium. Boston College played their first and only game there in 1988 at Lansdowne Road.

According to our research, Alabama has never played a football game in Ireland or overseas. But Nick Saban and the Crimson Tide love to play season-opening kickoff games at neutral sites.

Alabama faced Michigan last season in Arlington, Texas and open the 2013 season against Virginia Tech in Atlanta. The Tide return to Atlanta in 2014 to play West Virginia and then Arlington in 2015 to play Wisconsin.

Of the three possible schools, Notre Dame would be the most likely team to return to Ireland, followed by Boston College. Alabama would be an interesting team to feature overseas, but finding a worthy opponent might be difficult.

Alabama should play Notre Dame in Ireland. That way the Tide can shame ND in front of their name sakes.

Alabama not classy enough to be let out of U.S.

The problem would be getting Alabama over to Ireland due to a VISA situation. I’m not sure many of the players on the Crimson Tide could spell VISA.

Funny funny and I am a BAMA fan

I am an Auburn fan and I am sick of the jokes about the SEC. Beat us then talk your crap. I hate the Tide but come on. BC …..7 straight!

Who cares when you’ve won 3 out of the last 4 national titles you dumbass.

BC, don’t be a hater, they can spell VISA. They can also spell CHAMPIONSHIP.

Yes, b/c it’s too short of a word BC, “kicking your team’s ass” is a term they can spell perfectly.

Let’s leave the game to BC and ND to play at Croke Park. A flash in the pan program from decades ago (BC) and the wanna be dynasty school (ND), as BAMA replaced Notre Dame as the all time college football dynasty! Maybe ND can start over in Europe as a new dynasty, maybe?

Either that or they would say their VISA is Maxed out from pimpin out dat ride.

This is great news for the vast majority of football fans who can’t afford an expensive trip across the pond. Now they get to not watch their favorite teams play in person.

With the exception of Notre Dame I do not see what playing a game there benefits these teams. I believe they would get more out of it playing in Dallas, Atlanta, NYC etc.

Look for BYU to play Notre Dame @ this venue as part of 2 November games at ND and the NEUTRAL season opener at Croke with BYU as the home team.

That sounds good, where is the info there?

My dream is a Boston College/Notre Dame game. It will be interesting to see which side the Catholics of Ireland like the best. It will be a home game for BC as Boston is known as, “The 27th County.”

well, neither ND or BC are technically real “Catholic” schools, given certain recent decisions made by administration

Duh, the guy who does doesn’t like the SEC jokes, the first responder that enjoyed was Bama fan

I would enjoy seeing any American Football teams play at Croke Park.
Any sporting event that has zero affiliation with England that is………….
Give Ireland back to the Irish Britain, remember you stole part of it and
killed many innocents in the very park we are speaking of!
ROLL TIDE!

What most of ye dont understand is that there are loads of Americans living here in Ireland that dont get home that much to see our favorite college teams play live and when we do get home its usually to see family and friends. Any college or pro game here is good for our souls and doesnt really matter who it is. Ima huge ND fan but if Bama were to play Auburn here or any game I certainly would be there.

Right, b/c Alabama-Auburn would ever play in Ireland. Don’t hold your breath.

there is really on 1 Alabama joke, because the rest are true:)

The joke is your football team, and we all found out firsthand in January. Also, Boston College comes on here and talks smack? Boston who?

no way Alabama should play in Ireland! There are not enough home Bama games as it is now. ROLL TIDE

Alabama vs. Michigan in Ireland is a good possibly

Roll Tide Roll Bama vs Notre Dame would be sweet. And all I have to say to those Auburn fans is at least when we go to a championship we win

Idiots the sec did they even win a bowl game this year? They got smoked all the top teams even your beloved Alabama got beat by the big tens ohio state so keep up the bashing on other confrences haters. Brian Kelly is a great coach and notre dame and there banged up defense beat lsu who should have beat alabama. Maybe the sec should play other teams outside there confrence who are worth a Dahm!!! #GO IRISH HATERS!!!