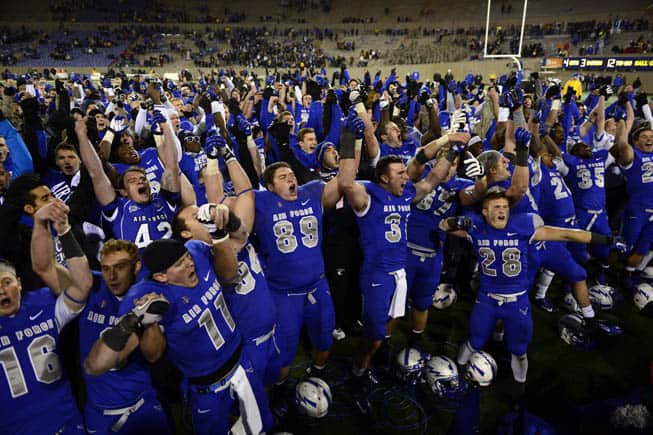 Air Force will host Abilene Christian at Falcon Stadium in Colorado Springs on Aug. 30, 2014. The game will be the season opener and first ever meeting between the two schools.

Abilene Christian is moving up to the Football Championship Subdivision from Division II, and will be counted as an FCS program for scheduling purposes beginning with the 2014 season. ACU will be a member of the Southland Conference.

The addition of ACU tentatively completes Air Force’s 2014 non-conference football schedule. The Falcons are also slated to travel to Georgia State on Sept. 13, host Navy on Oct. 4, and travel to Army on Nov. 1.

Other than a home game against Georgia State on Sept. 10, 2016, Air Force only has future games scheduled against Army and Navy after 2014.

Way to step it up Air Force! Too bad you did not get a real power like Tennessee-Martin like Boise State was brave enough to do!

I think it is funny that you bash Boise State about Tennessee-Martin… So programs in the ACC, SEC, and the other 3 powerhouse conferences aren’t weak by have 1 or even 2 FCS games in their schedules?? Shows they are too scared to schedule strong out of conference gaems in fear of not making the National Championship. If you all are so good, it wouldn’t matter how many strong OfC games you schedule!

Well Air Force has played at Tennessee, Oklahoma, Notre Dame, Michigan…not like they can always get quality teams that want to come to 7,000 feet and game plan/practice to stop the option.

Air Force has played great teams and I’m not bashing Air Force, I just have an automatic twitch that when someone picks on great teams in the MAC, C-USA, MWC or Sun Belt that it is more than likely an SEC fan…

That was a reply to nampa, my apologies :)

If you’re going to troll, at least make us laugh. Otherwise you just sound like an idiot who is unaware that Boise State has future home-and-homes scheduled against Washington, Florida State, BYU, Michigan State Connecticut, Oregon State, Washington State, Virginia, and Oklahoma State. Oh, and also a neutral site game vs. Ole Miss.

What about UT- Martin – Boise? I was too busy buying tix to the Georgia State – Alabama game to read what you wrote.

I agree losing to ACU will be a step up.

Hahahahahahaha, gonna be an ugly one for ACU that’s for sure.

I only hope that BYU and Air Force can rekindle their old rivalry…that was ALWAYS a good game :)

Was savannah state too busy?

Hey ACU is undefeated in their division one debute and also put up almost 200 points in three weeks so we’re not that bad.

Then lost to Tarleton State. Who???

Kevin, you tweeted that Georgia State will host Abilene Chr on Thursday, August 28, 2014. This can’t be correct, since this game is listed for 2 days after that, and also Boise State and Ole Miss are scheduled to meet in the Dome (where Georgia State plays their home games) on the same day.

Rumor is that Air Force requested their game vs. ACU be moved to the 2016 season.

Laugh all you want, but I see that Baylor has scheduled a game against Incarnate Word. See the 3/18/14 si.com