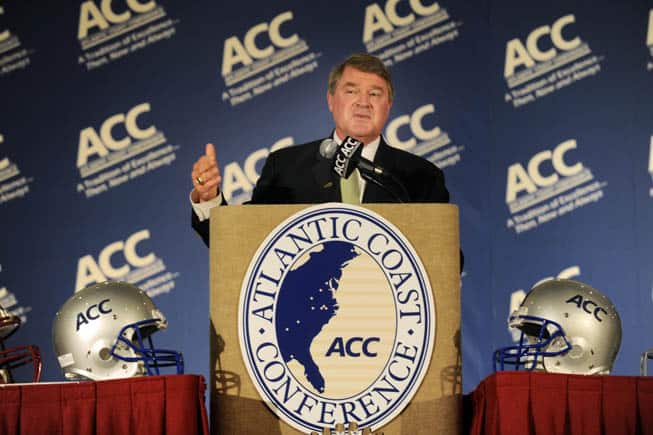 The ACC announced today that each current and future member has signed a grant of media rights to the league, effective immediately.

This includes all 12 current ACC members, Pittsburgh and Syracuse, who officially join July 1, and Notre Dame. The Fighting Irish also join on July 1 in all sports except football.

“This announcement further highlights the continued solidarity and commitment by our member institutions,” said ACC Commissioner John Swofford. “The Council of Presidents has shown tremendous leadership in insuring the ACC is extremely well positioned with unlimited potential.”

“The ACC has long been a leader in intercollegiate athletics, both academically and athletically,” said the collective ACC Council of Presidents. “Collectively, we all agree the grant of rights further positions the ACC and its current and future member schools as one of the nation’s premier conferences.”

The move essentially locks each school to the conference until the expiration of the TV deal with ESPN, which extends through the 2026-27 season. And beginning July 1, each school will receive over $20 million annually in media right, according to CBS Sports.

Another benefit of the deal is that it could end the recent barrage of conference realignment. The Big 12 and Big Ten have long been rumored to be interested in a few ACC schools, but the grant of rights should end that speculation.

Of course, it won’t affect moves in the smaller conferences, such as the Sun Belt, C-USA, Mountain West, or the new American Athletic Conference.

If a school chooses to leave the conference during the time frame of the agreement, their media rights revenue would remain with the ACC.

The ACC is only the fourth conference to approve a grant of media rights. The Big 12, Big Ten, and Pac-12 also have similar agreements. The SEC does not have a media rights agreement with its members, but it’s hard to envision a current member opting to depart the league.

Here are some comments from ACC Presidents on the grant of media rights:

“It makes sure that power conferences in the nation like ours are all solid,” Barron said to the Orlando Sentinel.

“There are three things that FSU is keenly interested in. One is stability, a second is that we have revenues that are competitive and a third is to have what will be an ACC Network that helps further our brand and also adds resources.”

“So from my perspective, the discussions with ESPN, these three things all fit together.”

“I’ve never wavered in the belief that the Atlantic Coast Conference was the best place for the University of Virginia” Littlepage told the Daily Press.

Only one conference has no fear of members leaving… Can you hear how that call would go….yes Mr Slive this is Tennessee, Auburn, Georgia, Florida, Miss State. etc. etc.
Yes we would like to leave!
Those calls will never happen

The only moves I could see happening now is the Big XII picking up South Florida and BYU; with UConn and Cinncinati making some deal with the devil to get into the Big Ten.

I doubt it, I suspect there is one FBS move left, and that is a 12th member to the Sunbelt, and then realignment will be done for a number of years.

I guess the money got high enough with this new media contract to keep Florida St happy. They did not want to move to the Big 12 and higher competition, but they needed the revenue that move would make. The rest of the rumored leavers (Clemson, Georgia Tech, etc.) just did not want to be left behind on the sinking ship if that move ever came about. Oh well, guess the Big 12 will stay at 10 members after all, I don’t see them adding anybody from the lower conferences except maybe BYU, but who would be the 12th? Nobody else would be worth the expansion, and even BYU is iffy.