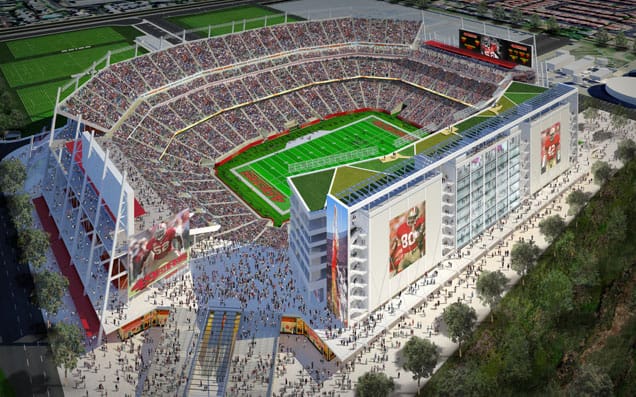 The 50th Super Bowl, Super Bowl L, will be played at the new Levi’s Stadium in 2016, the NFL announced today.

Levi’s Stadium, which is located in Santa Clara and is currently under construction, opens in August 2014 and will be the new home of the San Francisco 49ers. It will also be the home of college football’s Kraft Fight Hunger Bowl beginning in 2014.

The San Francisco Bay Area has previously hosted only one Super Bowl, Super Bowl XIX. In that contest back in 1985, the 49ers defeated the Miami Dolphins 38-16.

The NFL also announced today that the 51st Super Bowl, Super Bowl LI, has been awarded to the city of Houston and will be played at Reliant Stadium in 2017.

Reliant Stadium opened in 2002 and has an official seating capacity of 71,054. It is home to the Houston Texans and many other events, such as RodeoHouston, college football, soccer, concerts, and more.

I heard someone propose that the Super Bowl should only be played in markets that average temperatures above 50 degrees in Jan and Feb. I completely agree with that idea.

Keep the Super Bowl in warmer cities. Phoenix, Miami, Houston, Atlanta etc. Santa Clara makes the cut with Jan temps at 58 and Feb at 62 on average. Without an NFL caliber stadium in SOCal Levis stadium is the only current hope for Cali to get the big game. LA and or San Diego need to step up to get a new stadium built.

Football is an outdoor game. The weather just adds more excitement to the game.

This is how the NFL has always done it—the Super Bowl (until Goodell messed with it) was always in either a warm weather city, or a city that played in a dome. This had nothing to do with football or fans—-it was all about keeping the corporate types comfy. I’m hoping Super Bowls 48 and 50 are played in the snow—blizzard like conditions–so it will never go there again.

Maybe if the fans at the Super Bowl had to suffer like the players, they would appreciate the game more.

jst5 san diego has a stadium and what about the usc collusiem. if san diego didnt have a stadium where would the chargers play

Superbowl right in my backyard. Sweet.

Went to Holiday Bowl last season and San Diego needs a new stadium. It is okay on the inside but the outside of it and the concourses are just ugly concrete with zero character at all!

Who cares what a stadium looks like?…I just wanna see a good game. Hell, I’d sit in a dilapidated college stadium to watch another Giants-Pats SB.

Blah, blah, blah… When is it coming back to the Super Dome?

Its nice to have a brand new stadium. What about a team that has trouble understanding what “W” means. You have to have the fan base to fill the stadium to pay the bills and the players. If your stadium seats 70,000 and your paid attendance is only 45,000, then someone isn’t getting paid. Last time I checked, football owners do not qualify for low income.