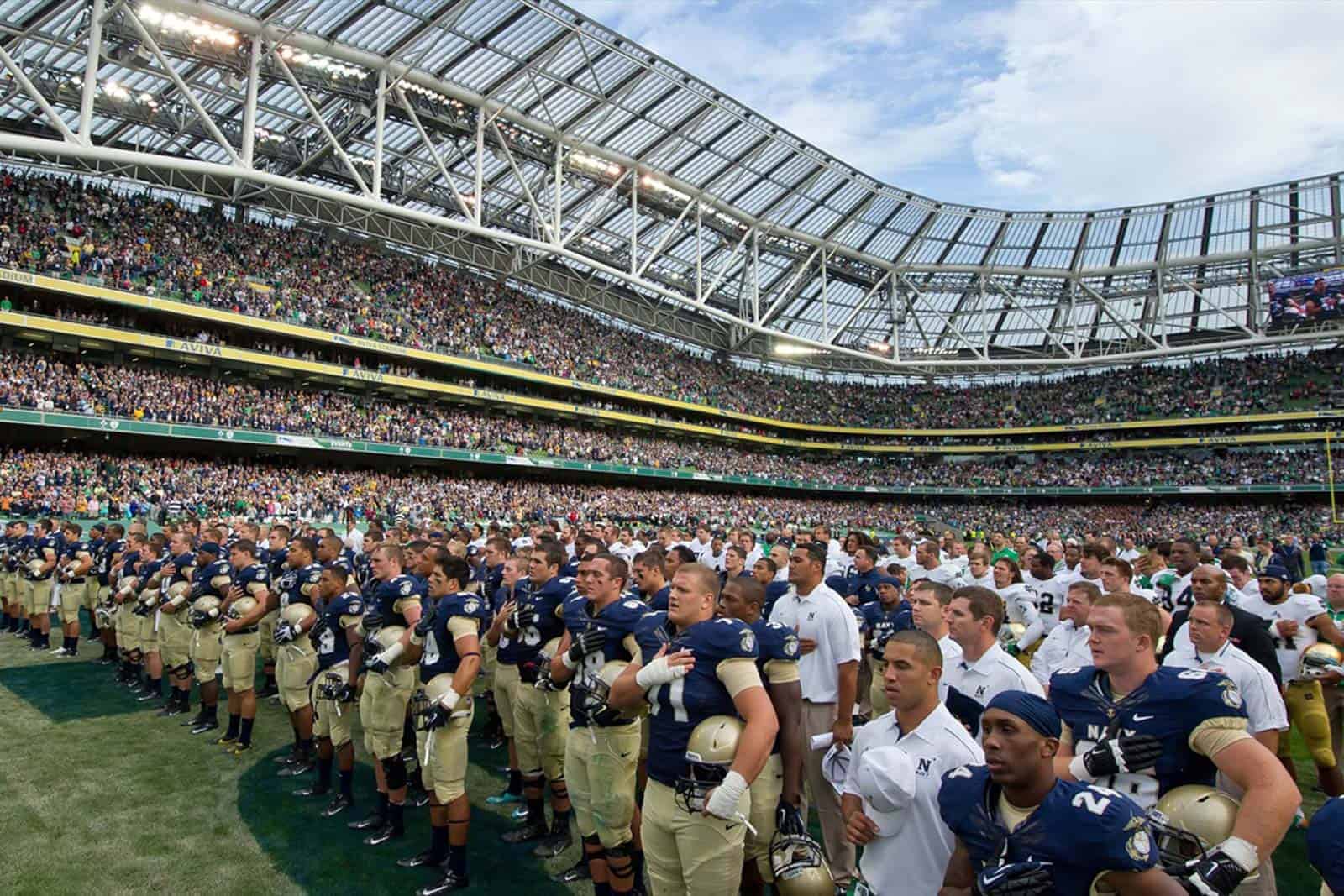 The Navy Midshipmen at Notre Dame Fighting Irish football game in 2023 will be played in Ireland, both schools announced on Thursday.

Notre Dame and Navy will square off in Week Zero on Saturday, Aug. 26, 2023 at Aviva Stadium in Dublin, Ireland, and the game will be televised by NBC and simul-streamed on Peacock. The game was previously scheduled to be played at Notre Dame Stadium in South Bend, Ind., on Saturday, Nov. 11.

“We’re thrilled to be able to provide another opportunity for our team and fans to experience the culture and hospitality of Ireland,” said Notre Dame Vice President and Director of Athletics Jack Swarbrick. “This trip overseas continues to strengthen our academic and athletic presence around the globe. Bringing a Notre Dame football home game atmosphere to Ireland has been a goal of ours and we couldn’t be more excited to partner with the Naval Academy to make it happen.”

Notre Dame and Navy have met two times previously in Dublin. The Fighting Irish defeated the Midshipmen 54-27 in 1996 and 50-10 in 2012, although they would later have to vacate the 2012 victory.

“We are very pleased to be returning to Aviva Stadium in Dublin for the 96th playing of the Navy-Notre Dame game,” said Naval Academy Director of Athletics Chet Gladchuk. “In 2012, it was one of the greatest airlifts in all of sports with more than 35,000 people coming from the United States to witness the beauty of Ireland and the pageantry that is a Navy-Notre Dame football weekend. We expect just as many people to return in 2023. The Navy fan-based support and enthusiasm for this game in Ireland is already overwhelming and with the ongoing support of the Prime Minister and the Irish government, it will again be an extraordinary experience. We look forward to our visit and a competitive contest against Notre Dame in a country that knows no bounds for hospitality.”

Notre Dame and Navy met on the gridiron annually since 1927 until their matchup in 2020 was canceled due to the COVID-19 pandemic. In their last meeting in 2019 in South Bend, the Fighting Irish defeated the Midshipmen 52-20 and now lead the overall series 77-13-1.

The two schools meet this weekend at Notre Dame Stadium. The game will kickoff at 3:30pm ET and it will be televised nationally on NBC and streamed on Peacock.

Notre Dame and Navy also announced on Thursday that they have agreed to extend their annual football series through the 2032 season.